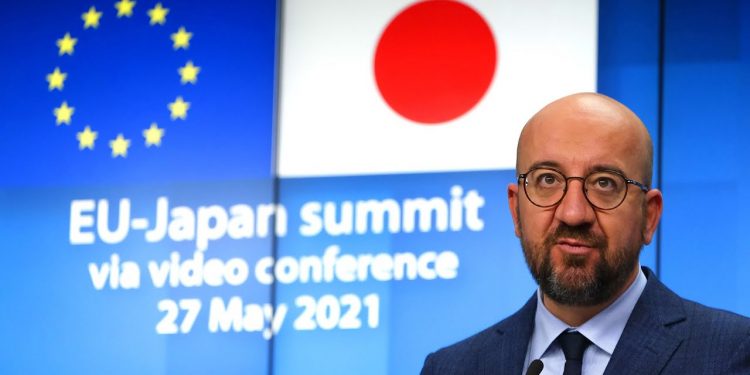 The European Union backed Japan for hosting the 2021 Tokyo Olympic Games, with 100 million vaccine doses to fight pandemic and an Olympics variant. The EU will continue to support the efforts for global pandemic control, including by exporting vaccines.

It is a sign of solidarity and a sign of friendship with Japan that so far the European Union has authorised more than 100 million doses to be exported to Japan. That is approximately enough to vaccinate 40% of the population. And this reflects the very strong bonds between the European Union and Japan.”

“We support the holding of the Olympic and Paralympic Games Tokyo 2020 in a safe and secure manner this summer as a symbol of global unity in defeating COVID-19,” the EU and Japan said in a joint statement after a summit. “We have of course said we are looking forward to the Olympics Games,” she told a news conference, adding that the vaccine shipments were a strong sign of EU support for preparations of a safe event.

The leaders also discussed the Climate Change and agreed for a Green Alliance digital transition, global economic governance, the implementation of the EU-Japan Strategic Partnership Agreement, Economic Partnership Agreement, and Connectivity Partnership, as well as joint work to address challenges and opportunities in respective neighbourhoods, notably in the Indo-Pacific region in light of the EU’s recently-adopted strategy.

Are the Tokyo Olympics Safe?

Japan is currently battling a fourth wave of infections and there is mounting pressure from health experts and business leaders to call off the Games. The Tokyo Medical Practitioners Association, an organization of about 6,000 doctors in Tokyo asked for a cancellation. At the same time a petition garnered 350,000 signatures to cancel Summer Olympic Games in Tokyo, Japan. the healthcare system is already overstretched and the Games would add further stress.

Tens of thousands of athletes from around the world Olympics gathering could lead to Olympic coronavirus variant. The head of a Japanese doctors’ union said that Japans must cancel the Games. Health experts urge Japanese government to consider the situation, which is not looking great in Japan.

Calls to ditch the Games in the face of the pandemic are getting louder by the day. Opinion polls show the majority of Japanese are opposed to holding the Games, which are set to begin on July 23. Current polls in Japan show nearly 70% of the population do not want the Olympics to go ahead.

The International Olympic Committee (IOC) announced that most athletes arriving in Japan will be vaccinated. IOC is ready for safe Olympics according to global experience. The Olympics Ceremony will open on July 23 and the Paralympics will follow on August 24. So why isn’t Japan talking about cancelling the Games? What could happen if the Tokyo Olympics get canceled?