Christine Lagarde has already put her signature on EURO banknotes 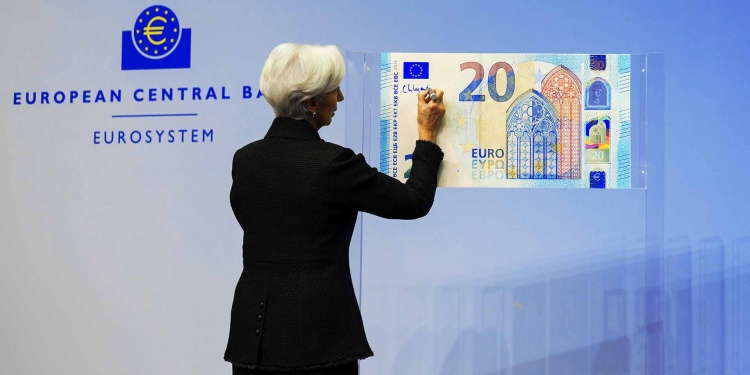 Mario Draghi is the only President to have signed the Europa series banknotes. Euro banknotes are part of our economy, identity and culture. Each one bears the signature of one of the former presidents of the ECB. Banknotes featuring President Lagarde’s signature will gradually enter into circulation in 2020.

We talk about the greenback for the dollar. Well maybe we should speak of the blue bridge for the euro.
Christine Lagarde, ECB President

There are two series of banknotes. The first series comprises seven different denominations: €5, €10, €20, €50, €100, €200 and €500. The second series, or Europa series, consists of six denominations and was completed with the issuance of the €100 and €200 on 28 May 2019. There will be no €500 banknote. The first series of notes, originally issued in 2002, is gradually being replaced by the Europa series. All the notes are legal tender throughout the euro area.

The second series of euro banknotes is called “Europa” because the notes contain a portrait of Europa, a figure from Greek mythology. It adds a human touch to the notes and, of course, is the origin of the name of our continent.

Digital imaging hardware and software is being increasingly used by counterfeiters. In response, the Central Bank Counterfeit Deterrence Group – an international group of more than 30 central banks which was set up at the request of the G10 central bank governors – has developed a counterfeit deterrence system (CDS) which prevents the capture or reproduction of images of protected banknotes. The system has been voluntarily adopted by hardware and software producers.

Each banknote bears the signature of either Willem F. Duisenberg, Jean-Claude Trichet or Mario Draghi – the first, second and third Presidents of the European Central Bank respectively. These banknotes are all equally valid.

Euro Banknotes – Our Money, Our Journey

Welcome address by Christine Lagarde, President of the ECB, on signing the euro banknotes

I’m honoured to be here to sign the euro banknotes, something that has become a customary ritual for the beginning of each ECB presidency. Before I pick up my pen, however, I would like to say a few words on the importance of this occasion.

The great economist John Kenneth Galbraith once said, “When money is bad, people want it to be better. When it is good, they think of other things”.

His point was that we want sound money not as an end in itself, but because it frees people to do more useful things with their lives: to work, to innovate, to invest.

And this, ultimately, is why the ECB exists – to secure that trust in money so that people can focus on what really matters to them. This is why our mandate and our main objectives reflect the well-known “functions of money”.

We have been tasked with monetary policy and banking supervision to ensure that the euro is safe and stable, and so can serve as an effective store of value. And our payment systems and banknotes make the euro a dependable medium of exchange.

And while all these tasks form part of our role as custodians of the euro, it is banknotes that are perhaps the most visible task for many European citizens. They stand out as our most tangible product: we can hold them in our hands and we use them on a daily basis.

And our euro banknotes, in different ways, serve as a binding element in the European construction. There are three dimensions to this. 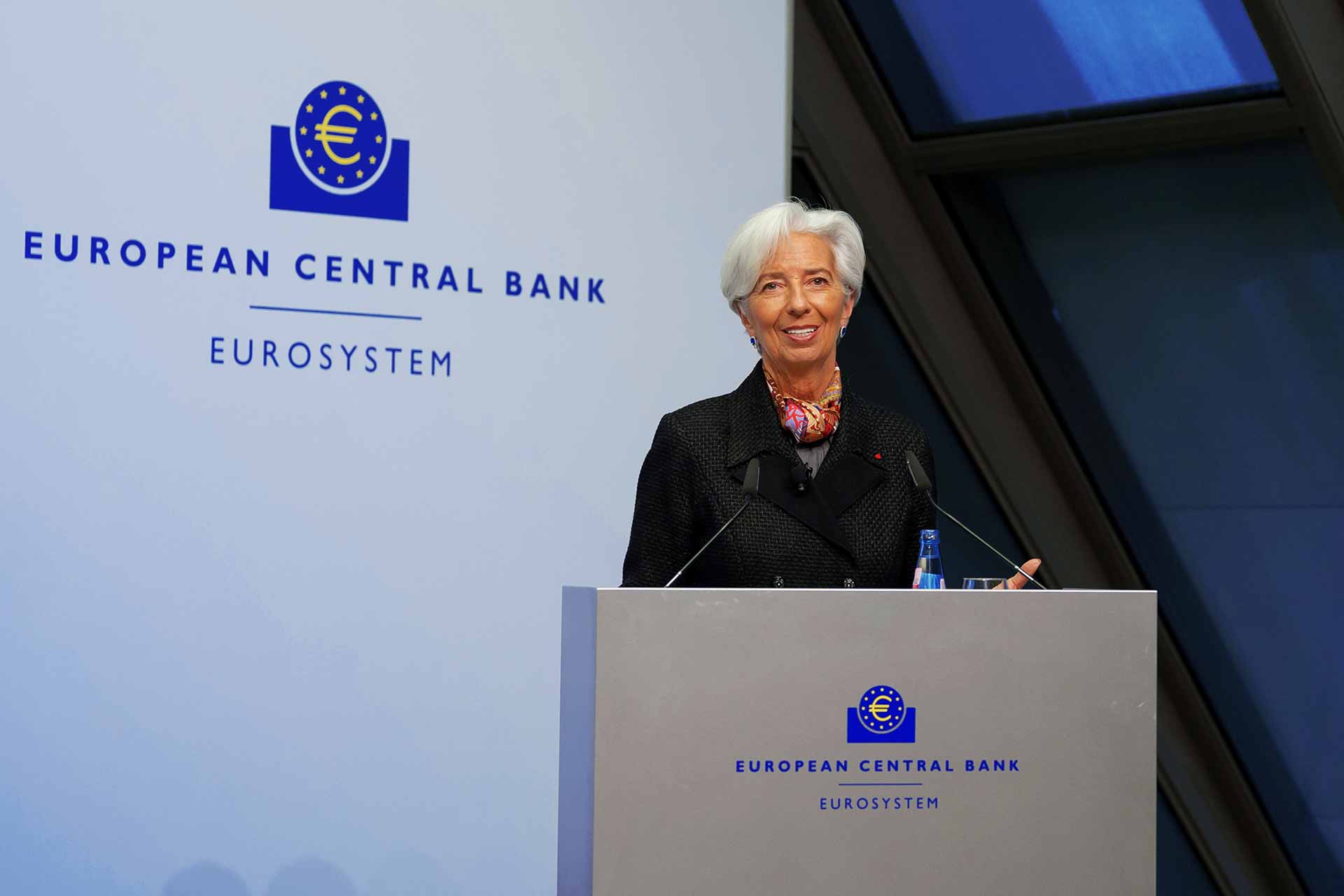 The first is the role of banknotes as the lifeblood of our economy.

In the euro area, banknotes are used for retail transactions more than any other means of payment. Some 79% of all transactions are carried out using cash, amounting to more than half of the total value of all payments.

This function of banknotes is, of course, common across many advanced economies. But there is also a second dimension that is unique to the single currency.

Our banknotes reflect a more fundamental development: the decades-long effort to bring Europe closer together. In a union of diverse countries, it is inherently more difficult to foster a common identity and a sense of shared destiny than in a single country.

But the euro is one thing we all have in common. It serves as the most tangible symbol of European integration, a process which has brought peace, freedom and prosperity to our continent.

And people do feel that. When they are asked to name the EU’s most positive achievement, euro area citizens generally put the single currency near the top of the list – right after peace among European countries and the free movement of people, goods and services.

This reflects the fact that the single currency makes the integration process concrete. Euro banknotes allow us to work, study and travel in 19 different countries without having to exchange money. The euro bears witness to the degree of integration we have achieved.

The third dimension that makes euro banknotes a unifying force in Europe is their design features – they connect us with our shared history. 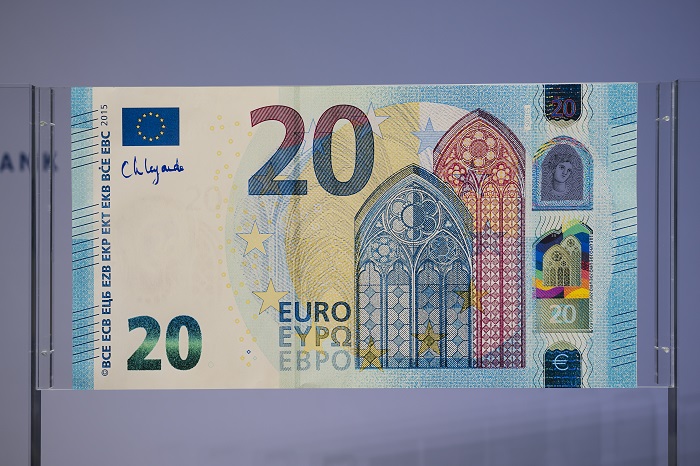 The design of our banknotes is a symbolic representation of European integration. The windows, gateways and bridges symbolise openness and cooperation between the people of Europe.

But rather than depicting actual structures, the designs reflect architectural styles from various periods in Europe’s history that have spread across Europe’s borders and shaped our culture – from classical architecture to the iron and glass architecture of the 19th century.

This highlights that, despite our diversity, we share a culture that is largely rooted in a common heritage and that has never been contained by national boundaries.

Our shared heritage is also referenced in the security features that protect our banknotes. The hologram and the watermark bear a portrait of Europa, a figure from Greek mythology which serves as the face of the euro.

So it is clear that, when I sign my name in a few minutes, I will not simply be undertaking a procedural task. These banknotes are part of our economy, our identity and our culture – and we at the ECB have an immense responsibility to ensure that people maintain their trust in them.

So far, we have done a fine job. Support for the euro has reached an all-time high: 76% of our citizens are now in favour of the single currency. Trust in our currency is there.

But it is said that “trust takes years to build, seconds to break and forever to repair”.

So it’s now our duty to nurture and sustain this trust – by ensuring that banknotes are secure, payments systems are robust, and the value of the euro is stable.