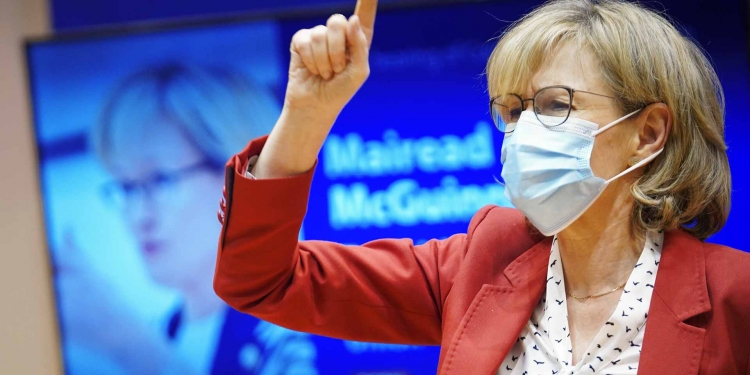 European Commissioner for Financial Services, Financial Stability and the Capital Markets Union, Mairead McGuinness is heard by the Economic and Monetary Affairs Committee (ECON). MEPs evaluated if she is suitable to become a member of the College of Commissioners and if she is qualified to carry out the particular duties assigned to her.

The parliament will vote next Wednesday. Based on the committee’s recommendations, the Conference of Committee Chairs will assess the outcome of the hearing and forward its conclusions to the Conference of Presidents. The latter will carry out the final evaluation on 6 October and decide if the hearing can be concluded. If so, the plenary will vote on whether or not to approve the Commissioner-designate on 7 October.

People at front and center

During her introductory speech, Ms McGuinness told MEPs that her guiding priority would be to put people front and centre of the roll out of the EU’s financial services architecture. Mairead McGuinness told the European Parliament’s Committee on Economic and Monetary Affairs that she believes a banking union is key to avoid being “vulnerable in time of crisis”. She also vowed to instigate “fresh energy into completing a banking union” to ensure financial stability in the European Union.

Mairead McGuinness insisted on public money being used as much as possible toward projects leading to the green transition. McGuinness said that she understood that tax is a “big issue” for EU citizens. It was important that tax “should be fair and efficient”.

The financial system must be used to underpin a more inclusive society. Ms McGuinness also said she would prioritise lending to the real economy, especially SMEs.

MEPs were also keen to sound out Ms McGuinness on these priorities in more detail. Many also asked her to commit to going further with legislation aimed at incentivising investments beneficial to the climate and the environment.

Many MEPs asked the Commissioner-designate how she planned to give new impetus to the completion of the capital markets union and the banking union, with a number of them warning that the obstacles laid down by some member states risked paralysing the whole process.

A number of MEPs also asked about the next steps that Ms McGuinness would take to tackle money laundering more efficiently, including on when exactly she would attempt to propose new legislation. MEPs also raised the topics of Brexit, gender mainstreaming in the financial sector, crypto currencies, and taxation, among others.

Speaking immediately after the hearing of Mairead McGuinness in Brussels, Jonás Fernández, S&D spokesperson on economic and monetary affairs, stated:

“In the European Parliament, we have known Mairead McGuinness for many years as an experienced, hard-working colleague and convinced European. The Socialists and Democrats never had any doubts that she is qualified to be a Commissioner.

“However, we had concerns as to whether she was fit for the portfolio. Financial services is a very demanding and technical file. Today, she has demonstrated that she has mastered this complex topic.

“Ireland is not a fair player when it comes to taxation and financial services. Although tax issues do not come directly under her designated portfolio, the Socialists and Democrats expect all European Commissioners to be committed to the fight for tax justice. This is why we insisted on obtaining commitments from the Commissioner-Designate that she will push through public country-by-country-reporting, that will ensure citizens and investors are aware of the profits, number of employees and taxes paid by multinationals in each country they operate. The Financial Transactions Tax would be a very important source of EU own resources. This is why we want the next financial service Commissioner to come up with a proposal on an FTT very soon. After the hearing we are convinced that she will act as a European Commissioner and is committed to the interests of the EU as a whole.

“If approved, McGuinness will have to hit the ground running as she will need to get a grip on big challenges from day one in office. The Banking Union, with its supervision and resolution pillars is considered one of the biggest achievements of the EU. However, to complete the Banking Union we still need to establish a European Deposit Insurance Scheme and a fully-fledged backstop for the European resolution fund. Especially now that the financial impact of the COVID-19 pandemic is starting to hit banks and we will see an increase in their non-performing loans, we must make sure that banks remain resilient and people’s savings are safe. McGuinness will also need to quickly present concrete proposals to foster the deepening of the Capital Markets Union, which we currently need more than ever to promote alternative financing arrangements for SMEs.

“We are glad President Ursula von der Leyen heralded our Group’s call for a woman candidate bringing the Commission a step closer to gender balance. She will be the first woman ever to be entrusted with this dossier. Today’s hearing convinced us that Mairead McGuinness is qualified to be Commissioner for Financial Services and we look forward to working together with her for greater financial stability and more tax justice.”

After being cross-examined this morning in the European Parliament’s Economic and Monetary Affairs Committee, Renew Europe members have unanimously decided to support Mairéad McGuinness, nominee for the position of European Commissioner for Financial Stability, Financial Services and the Capital Markets Union.

Mairéad McGuinness persuasively responded to a diverse portfolio of questions from Renew Europe MEPs, covering the state of financial architecture post-Brexit, the Banking Union, money laundering, sustainable finance and the effects of COVID19 on Europe’s SMEs, as well as gender balance, among other issues.

Renew Europe members were impressed both by her written answers and her performance during the hearing. They are convinced that the Commissioner-designate is reform-oriented, will work closely with the European Parliament, and that she has the skills to build the coalitions needed to move forward on ensuring financial stability in these difficult times.

Renew Europe is particularly pleased with the commitments made by Mairéad McGuinness to act quickly to complete the Banking Union, a vital piece of the puzzle necessary to preserve financial stability as well as securing extra finance for SMEs and ensuring a bright future for the Euro. The Commissioner-designate strongly endorsed Renew Europe´s priorities in key areas such as consumer protection, ensuring that credit flows reach consumers, start-ups and SMEs, and addressing the supervisory challenges outlined by the Wirecard scandal.

“Renew Europe is satisfied with Madame McGuinness´ commitments to deliver on the reforms Europe needs. We expect that, under her leadership, the Union will push decisively for a common deposit insurance to shield savers in times of financial turmoil, deliver on an ambitious SME strategy and strengthen the European anti-money laundering framework through the establishment of a single European supervisor.”

EPP: Mairead McGuinness will be a competent and impartial Commissioner

“Mairead McGuinness performed very well today. She has proven that she has mastered a difficult subject matter and reassured us that she will be a competent and impartial Commissioner who will fight for strong and fair financial markets in Europe“, commented Markus Ferber MEP, EPP Group Spokesman on Economic and Monetary Affairs.

“Against the background of the challenges of the pandemic and a potentially messy Brexit, we need a strong, decisive and competent Commissioner for financial services who is well connected in the European Parliament. Mairead McGuinness has proven today that she can fulfil that role.”