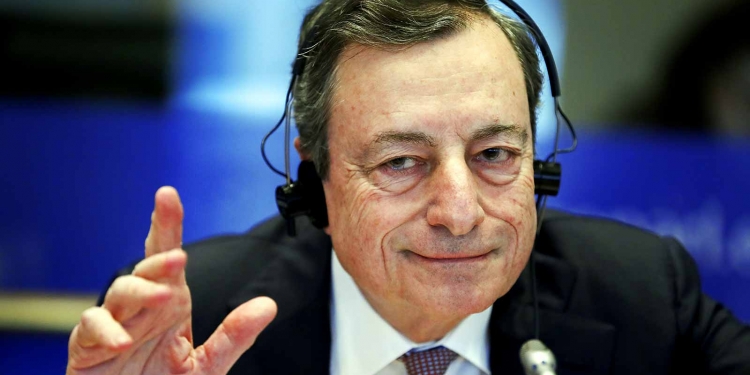 EU MEPs debate on the Monetary Dialogue in Brussels with Mario Draghi, President of the European Central Bank. “Super Mario” appeared at the meeting of the Committee on Economic and Monetary Affairs (ECON) in the European Parliament.

Euro area GDP grew by 0.2% in the third quarter.

This follows growth of 0.4% in both the first and second quarter of 2018. The loss in growth momentum mainly reflects weaker trade growth, but also some country and sector-specific factors.

Is this slowdown is temporary or more long-lasting?

Mario Draghi believes that a gradual slowdown is normal as expansions mature and growth converges towards its long-run potential. Indeed, looking further ahead, employment growth is expected to slow somewhat as labour supply shortages become more binding. Savings ratios will also normalise and temper consumption dynamics to some degree. This is also reflected in ECB projections from September, which see annual growth at 2.0% for this year, and then slightly lower rates of 1.8% in 2019 and 1.7% in 2020.

OECD: Economic prospects are weakening for both advanced and emerging economies.

Some of the slowdown may also be temporary. In fact, the latest data already show some normalising of production in the car industry which has been impeded by one-off factors. In addition, insofar as world trade stabilises, albeit at a lower level, its drag on growth could also be temporary. At the same time, risks relating to protectionism, vulnerabilities in emerging markets and financial market volatility remain prominent. Underlying drivers of domestic demand remain in place. Household income, which underpins domestic demand, continues to be supported by high levels of capacity utilisation and further improvements in labour markets.

The unemployment rate declined to 8.1% in September 2018. This rate is the lowest level since late 2008 and employment increased in the third quarter. Moreover, business investment is supported by still very favourable financing conditions in the euro area, together with solid demand and rising profitability.

I am confident that you and the EU leaders will again play an instrumental role in moving this EMU agenda forward.
Mario Draghi, ECB President

Moreover, the lack of a robust regulatory, supervisory and crisis management framework when the crisis hit gave rise to increased doubts in the solidity of the European banking system. This in turn affected the financing of the real economy and the transmission of monetary policy. Second, as we have seen in the past crisis, the euro area can be exposed to the risks. These risks come from unsustainable domestic policies resulting in excessively high levels of debt, financial sector vulnerabilities and/or a lack of competitiveness. Through financial, confidence and trade channels, these risks can spill over to other countries. They all have similar fragilities or strong interlinkages with the country where the risk originated.

As recently advocated by the ECB in its opinion on the establishment of a European Investment Stabilisation Function. The euro area needs a fiscal instrument to help maintain convergence in the face of large exogenous shocks, thereby also supporting the single monetary policy. A fiscal stabilisation function should focus on cyclical developments. This stabilisations should be conditional on economic and fiscal policies being sound and fully respecting the EU’s governance framework. This would in turn contribute to macroeconomic stability both at the euro area level and, crucially, in each of its Member States. And it would allow action before recourse to the ESM needs to be made.

For situations where market instability materialises, the ESM remains essential to credibly address the causes of financial instability and contagion. It is important that the ESM provides the financial instruments, necessary to achieve its objectives and to support the banking union.

Ambitious reform plans and trust among all parties

Mario Draghi also notes that many of the basic steps need to be taken now. The top priorities are the design of an ambitious reform plan and building trust among all parties.

Is this slowdown is temporary or more long-lasting?