Reforming the Eurozone: How to Handle Sovereign Debt? 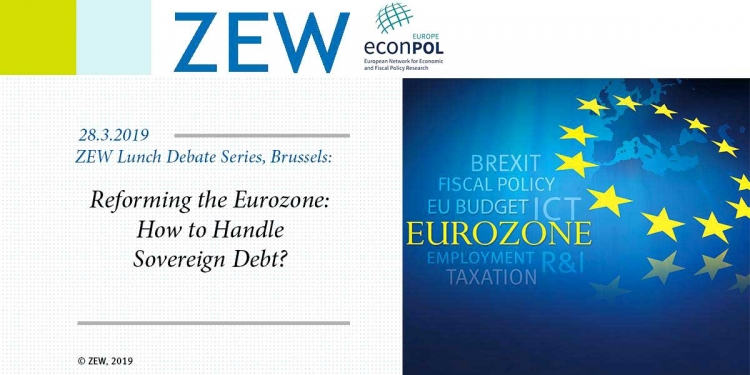 The challenges facing the Eurozone are multifaceted, with Greece still having a long road to recovery and Italy facing a dangerous mix of a large government deficit and an already high debt level. This Lunch Debate will be dedicated to discussing possible courses of action for the EU, if levels of sovereign debt become unsustainable. A special focus will be on how an insolvency procedure for sovereigns may be designed as well as the risks and opportunities this presents.

With the Eurogroup having agreed on a reform proposal for the EMU on 3 December 2018 (which foresees improved collective action clauses and the ESM assuming the role of a moderator in creditor negotiations), the topic will be of particular relevance given that the reforms are due to be implemented in spring this year.

The Lunch Debate, which is jointly organised by ZEW and EconPol Europe (European Network for Economic and Fiscal Policy Research), will be based on an overview paper on possible design options for a sovereign debt restructuring mechanism, which will be published for the event.

In 2016, the Mannheim Centre for European Economic Research (ZEW) celebrated its 25th anniversary. In 1991 the institute opened its doors with only a small team of employees. Today, 25 years later, ZEW has become one of the leading economic research institutes in Germany and Europe. Though only established relatively recently, the economic research institution has become an unparalleled success.

The ZEW – Leibniz Centre for European Economic Research in Mannheim is a non-profit and independent institute with the legal form of a limited liability company (GmbH). Founded in 1990 on the basis of a public-private initiative in the Federal State of Baden-Württemberg in co-operation with the University of Mannheim, ZEW is one of Germany’s leading economic research institutes, and enjoys a strong reputation throughout Europe. ZEW pursues four key objectives:

The institute addresses on decision-makers in politics, business, and administration, scientists in the national and international arena as well as the interested public. Frequent surveys on the situation on the financial markets and the business situation of the information economy as well as the large-scale annual study on innovation activities in the German economy are representative for the different types of information provided by ZEW.