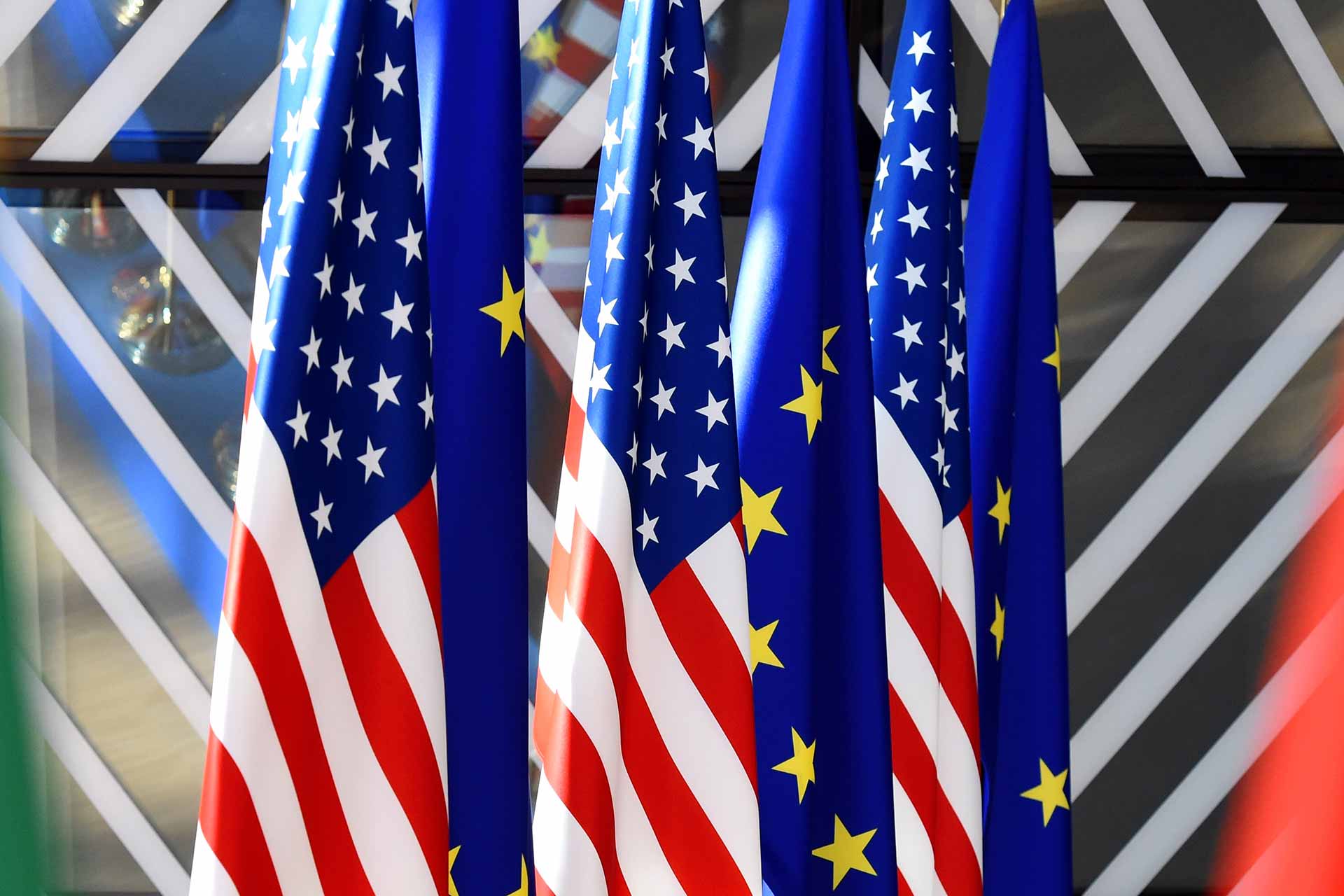 After days of waiting for a winner to be called, Joe Biden is officially the President-elect of the United States. Also Kamala Harris an American politician and attorney will be the US Vice-President.

Who is Joe Biden? 46th US President

In recent years the transatlantic relationship has been tested

Joe Biden as US Vice-President visited the European Parliament in Brussels on 6 February 2015. He met EP President Martin Schulz and the political group leaders. Welcoming Biden to the Parliament, Schulz said: “In recent years the transatlantic relationship has been tested. Yet, there is much more that unites us than divides us.” Biden had a bilateral meeting with Schulz, which was followed by a meeting with the political group leaders to discuss common challenges. Schulz said afterwards: “2014 saw a number of fundamental geo-political changes and new challenges. Together we are called upon to deal with shifting global realities.”

The State of the Transatlantic Relationship in the Trump Era

For seven decades the transatlantic partnership has been the bedrock of the post-World War II international order grounded in the United States and Europe’s shared commitment to freedom, democracy, human rights, rule of law and open trade.

Anchored in a network of transatlantic-centered institutions such as the North Atlantic Treaty Organization (NATO), the European Community and later the European Union, as well as international organizations such as the IMF or the WTO, the transatlantic relationship was built to provide the normative grounds on which the liberal international order would rest. Despite numerous ups and downs in the past over issues related to international security, trade disputes and diplomatic tensions, this values-based transatlantic relationship has proved resilient to crisis.

When the EU-US Relationship was more tested in these seven decades?

On a visit to Brussels in 2010, US Vice-President Joe Biden stressed the importance of the EU-US relationship in responding to 21st Century threats such as climate change and the fight against terrorism. Speaking to the European Parliament, Biden said “much has changed” since late US President Ronald Reagan addressed the EU assembly in 1985. Referring to America’s help in rebuilding Europe after the Second World War, Biden said Europe continues to be the United States “most important ally” and trading partner.

It’s no accident that Europe is my first overseas destination as vice-president. We need each other more now than we ever have.

Joe Biden mentioned: “The past 65 years have shown that when Americans and Europeans devote their energies to common purpose, there is almost nothing that we are unable to accomplish.”.

Europe reacts to Biden winning US presidential election. Europeans congratulated Joe Biden as he elected the 46th President of the United States.

“The European Union and the United States are friends and allies, our citizens share the deepest of links. Together we have built an unprecedented transatlantic partnership rooted in common history and shared values of democracy, freedom, human rights, social justice and open economy,” von der Leyen said.

“I look forward to future cooperation with President Biden. Our transatlantic friendship is irreplaceable if we are to master the great challenges of our time,” said Angela Merkel in a statement.

Vice President Joe Biden spoke today with European Commission President Jean-Claude Juncker to discuss Ukraine, Syria, energy security, economic issues, and migration. On Ukraine, the two leaders agreed that sanctions on Russia should be tied to full implementation of the Minsk agreements, and that Ukraine needed to move forward expeditiously with further economic and anti-corruption reforms. The Vice President and President Juncker discussed the need for the United States and EU to cooperate in dealing with the European migration crisis as well as coordinate diplomatic efforts to seek a political resolution to the Syrian conflict. On energy security, the two leaders discussed the need for energy diversification and full application of EU competition standards. Finally, the Vice President and President Juncker both underscored the importance of rapidly concluding a replacement to the Safe Harbor framework, which is vital to both the U.S. and European economies.

The European Union and the United States have the largest bilateral trade and investment relationship. EU – US both enjoy the most integrated economic relationship in the world. EU and US investments are the real driver of the transatlantic relationship. They are both contributing to growth and jobs on both sides of the Atlantic. A third of the trade across the Atlantic actually consists of intra-company transfers.

The transatlantic relationship also defines the shape of the global economy as a whole. Either the EU or the US is the largest trade and investment partner for almost all other countries in the global economy.

In 2018, trade tensions between the EU and the USA escalated. The US imposed tariffs of 25% and 10% on steel and aluminium imported EU on the basis of alleged national security concerns, to which the EU retaliated. The US also threatened its trade partners with tariffs on cars and car parts. In parallel, the EU is concerned about US blockage of new appointments to the Appellate Body in the WTO. This has paralysed the second appeals step of the WTO dispute settlement system. In July 2018, Commission President Juncker reached a political agreement with President Trump to avoid further escalation on the tariff front.

In January 2019, the European Commission published two draft negotiating directives partially implementing the first point of the Joint Statement. The Commission requested the opening of negotiations on a trade agreement, which would strictly focus on the removal of tariffs on industrial goods, and exclude agricultural products; and on an agreement on conformity assessment, that would help address the objective of removing non-tariff barriers. This would make it easier for companies to prove their products meet technical requirements of both the EU and USA. The negotiations on the two agreements have not started yet, although technical talks on conformity assessment have progressed slightly.

The Trump Administration’s trade policy is driven by the belief that previous Administrations have let other countries take advantage of the United States for foreign policy reasons, as demonstrated by America’s more open trade regime and its trade deficits. It is determined to end this perceived imbalance by demanding reciprocity instead, and is willing to use tough tactics to achieve this through strict enforcement of its procurement and trade defense law; expansive tax provisions; bringing the WTO dispute settlement to a halt; withdrawing from and forcing others to renegotiate existing bilateral and multilateral agreements; adopting a novel “national security” argument to justify breaking WTO tariff commitments for steel, aluminum and possibly autos; and enacting punitive tariffs on billions of dollars of imports from China, possibly threatening a trade war. The scenarios for U.S.-EU trade relations as well as the global trading system are anything but rosy.

The EU can stand up to the Administration’s “bullying,” or it can take advantage of America’s need for a “rebalancing” to build its own stature by taking simple steps to improve EU-U.S. trade, forging a way forward in the WTO, and providing necessary leadership to address the dangers China’s economic system poses to the global trading order.

Consequences of US trade policy on EU-US trade relations and the global trading system. The fi rst half of 2018 has seen the start of bilateral trade wars with the US. The US has been and remains the most important trade partner for the EU – and has also been the EU’s closest and most like-minded ally. Do the current administration’s policies mean that this is no longer the case? If so, how should the EU react to that?

How will Joe Biden change US trade relations?

Europe as a continent that is very integrated in trade and financial terms, US actions do leave the European economy exposed and vulnerable. This is why it is important to have credible tools that can be implemented in real time and expose the real costs of trade hostility. At the same time, the EU needs to expand its trade with other countries, protecting the gains from open trade. Lastly, the EU needs to encourage reform of the global rule book, the WTO, in order to ensure equal access for all. This is important if we are going to have more equally apportioned gains from free trade across the world.

Does Europe need a reset of the EU trade relationship?

US election 2020: How the world reacted to a Biden win?