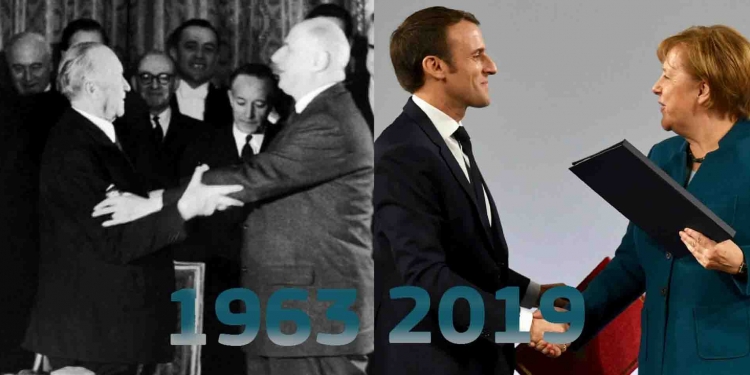 German Chancellor Angela Merkel and French President Emmanuel Macron signed a friendship treaty that recalls a historic pact the former enemies agreed to in 1963. The new accord was signed in the ancient western German city of Aachen, exactly 56 years after the Elysee Treaty that is considered a key moment in Franco-German relations.

Merkel and Macron want to boost cross-border cooperation along the countries’ 450-kilometer frontier, but also coordinate better on tackling international problems such as climate change and terrorism.

Franco-German Tus:
‘We can win back sovereignty with better co-operation’

I will put it bluntly – today Europe needs a clear signal from Paris and from Berlin, that strengthened cooperation in small formats is not an alternative to the cooperation of all of Europe. That it is for integration, and not instead of integration.
Donald Tusk, President of the European Council

“It is for such people, and thanks to such people, that Europe exists. Keep working to strengthen it, do not let the idea die. France and Germany need it to the exact same degree as Poland, Lithuania, Bulgaria and Ireland. Remember this today and tomorrow. I, in any case, will continue reminding you about it.” Mr President added.

Signing of the Treaty on Franco-German Cooperation and Integration

They agreed to settle conflicts around a table rather than in battlefields and replaced the use of armed forces by force of law. Look back with pride, look forward with hope.