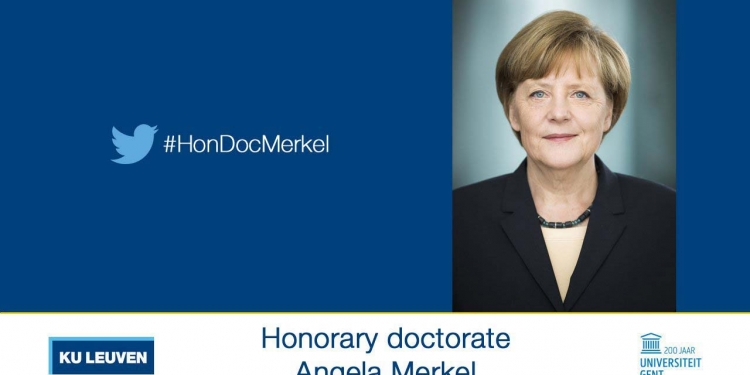 German Chancellor Dr Angela Merkel received the honorary University doctorate for her diplomatic and political efforts to develop the political strength of Europe, and to defend the values that allow our continent to find unity in diversity.

The academic ceremony took place in Brussels on Thursday 12 January well organized by the two great and most famous universities of Belgium and Europe – Ghent University and KU Leuven. 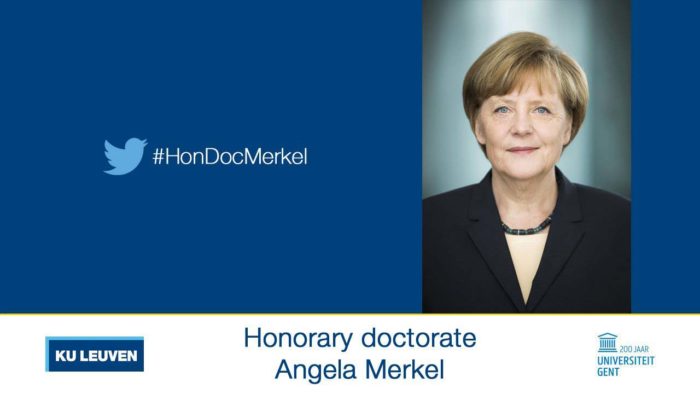 Dr Angela Merkel your three words “Wir schaffen das.” have become part of our collective memory.
These three words triggered one of the loudest public debates this continent has ever known.

This, after all, is what makes human beings human. Wir schaffen das. This is what makes you a role model, even though this is not an actual position, and even though it’s unlikely that you’re deliberately trying to be one.

With Wir schaffen das – attainable or not – you nevertheless stand a good chance in a couple of decades from now. Not with the words themselves, perhaps, but with the nobility of soul that gives these words their strength.
Professor Dr. Rik Torfs – Rector KU Leuven

When Angela Merkel took the floor, she urged EU nations to work together for a better common future! Europe must learn to take more responsibility in the world. Have have to:

Merkel also says EU 27 must show united front in Brexit talks. She mentioned: “It is important that we do not allow ourselves to be divided, the 27 must act together in the negotiations.”

Chancellor Angela Merkel warns the EU it should not rely on “eternal” US support, as concern grows in Europe about Donald Trump Presidency.

German Chancellor Dr Angela Merkel urged also EU members to increase their willingness to compromise on issues such as illegal migration, asylum and security across the European borders by increasing the exchange of data and creating a register of people entering and leaving the Schengen area.

German Chancellor SDr Angela Merkel made a really emotional speech for the future of Europe. At the same Far-right activists gathered in Brussels to protest against the award a title of honourary doctorate to German Chancellor.

Is Merkel the EU’s Real Leader?

Does Europe need more than Merkel?