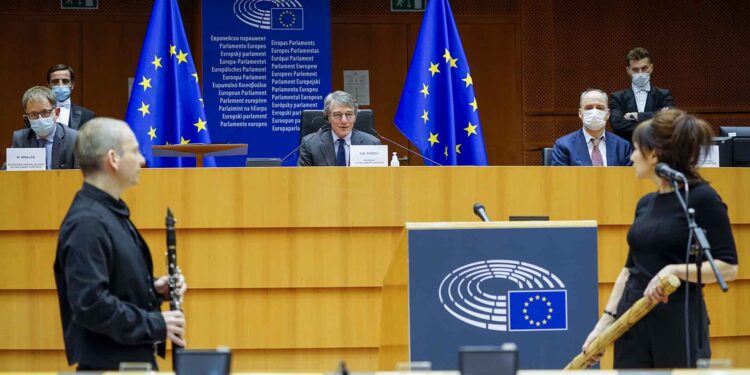 The ceremony opened with a speech by the President of the European Parliament David Sassoli and a performance of traditional Yiddish songs by Gilles Sadowsky (clarinet) and Hanna Bardos (voice). At the ceremony participated with remote speeches the President of the Conference of European Rabbis, Chief Rabbi of Moscow, Mr Pinchas Goldschmidt and Mr Gyula Sárközi, dancer, choreographer and representative of the Roma community.

The commemoration concluded with a minute of silence in honour of the victims of the Holocaust and the prayer El Maleh Rahamim, recited by Israel Muller, Chief Cantor of the Great Synagogue of Europe in Brussels.

One year ago today, I lit a candle in Auschwitz to remember the victims of the darkest chapter in European history.

This tragedy — the systematic and industrial elimination of six million children,  women, and men — is unique in the history of humankind.

Remembering the Holocaust is a moral and a historical duty. Not only to pay tribute to the victims. But also to renew our allegiance to our deepest human values, negated by the perpetrators of this unspeakable crime, while others remained silent.

Silence is the first step towards acceptance. Since 1945, those who survived the number cut into their skin, did not remain silent.  They testified. They spread the light of remembrance and hope to future generations.

Soon, there will be no more survivors to testify. This solemn duty will therefore pass to us, the next generations.

This hatred, tragically, continues too often today. Antisemitism rears its ugly head in Europe. It has, in many ways, become disturbingly normalised. This is intolerable.

From the darkness of World War II, Europe’s founders built a society based on tolerance, human rights, freedom of religion or belief, and freedom of expression. Antisemitism has no place in our societies. We will never tolerate that Jews fear for their safety in the European Union. Europe without Jews would not be Europe.

Combating antisemitism with full force is our common duty. Antisemitic speech is hate speech. And we will punish it. We will make sure that life for European Jews in Europe remains as natural and normal as the life of any other European, no matter their origin or belief.

Today I take this oath and light a candle, in Brussels, in the name of the European Union. And I hope many others across our continent will light a candle, just as candles are lit in Auschwitz.

We must light this candle every day, respecting this oath. And defending the values at the foundation of Humanity.