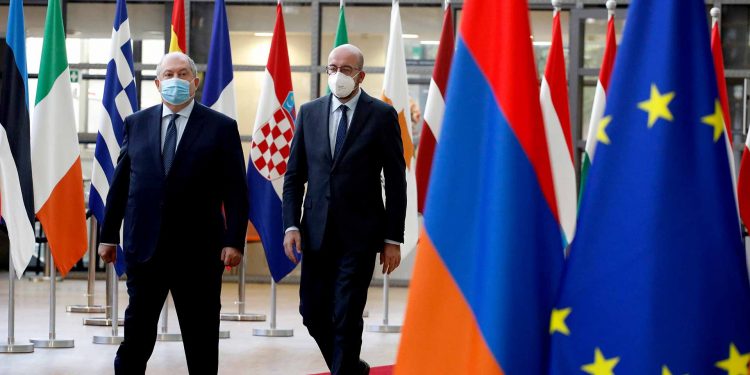 On 1 March 2021, the European Union-Armenia Comprehensive and Enhanced Partnership Agreement (CEPA) will enter into force. It has now been ratified by the Republic of Armenia, all EU Member States and the European Parliament. This represents an important milestone for EU-Armenia relations.

This Agreement provides a framework for the EU and Armenia to work together in a wide range of areas: strengthening democracy, the rule of law and human rights; creating more jobs and business opportunities, improving legislation, public safety, a cleaner environment, as well as better education and opportunities for research. This bilateral agenda also contributes to overall aim of the EU to deepen and strengthen its relations with the countries of its Eastern neighbourhood through the Eastern Partnership framework.

High Representative of the European Union for Foreign Affairs and Security Policy/Vice-President of the European Commission, Josep Borrell, said: “The entry into force of our Comprehensive and Enhanced Partnership Agreement comes at a moment when Armenia faces significant challenges. It sends a strong signal that the EU and Armenia are committed to democratic principles and the rule of law, as well as to a wider reform agenda. Across political, economic, trade, and other sectoral areas, our Agreement aims to bring positive change to people’s lives, to overcome challenges to Armenia’s reforms agenda.”

Commissioner for Neighbourhood and Enlargement, Olivér Várhelyi, underlined that: “While these are trying times for Armenia, the European Union continues to stand by the Armenian people. The entry into force of the bilateral EU-Armenia agreement on 1 March will allow us to strengthen our work on the economy, connectivity, digitalisation and the green transformation as priority areas. These will have concrete benefits for the people and are key for socio-economic recovery and the longer-term resilience of the country. In the current turbulent days, maintaining calm and respect for democracy and constitutional order are key.”

The Agreement was signed in November 2017 and substantial parts of have been provisionally applied since 1 June 2018. Since then, the breadth and depth of the bilateral cooperation between Armenia and the European Union have advanced steadily. At the 3rd EU-Armenia Partnership Council held on 17 December 2020, the European Union and Armenia reiterated their full commitment to implementing the CEPA.

Armenia and Azerbaijan in Brussels. Who won Nagorno Karabakh conflict?

The Agreement plays an important role for the modernisation of Armenia, in particular through legislative approximation to EU norms in many sectors. This includes reforms in the rule of law and respect of human rights, particularly an independent, efficient and accountable justice system, as well as reforms aimed at enhancing the responsiveness and effectiveness of public institutions and at favouring the conditions for sustainable and inclusive development.

From the entry into force of the Agreement on 1 March, cooperation will be strengthened in those areas which to date were not subject to the provisional application of the Agreement. The European Union stands ready and looks forward to working even more closely with Armenia on the full and effective implementation of the Agreement, in our mutual interest and to the benefit of our societies and citizens.