Global Trends to 2030 – Challenges and Choices for Europe #eudebates 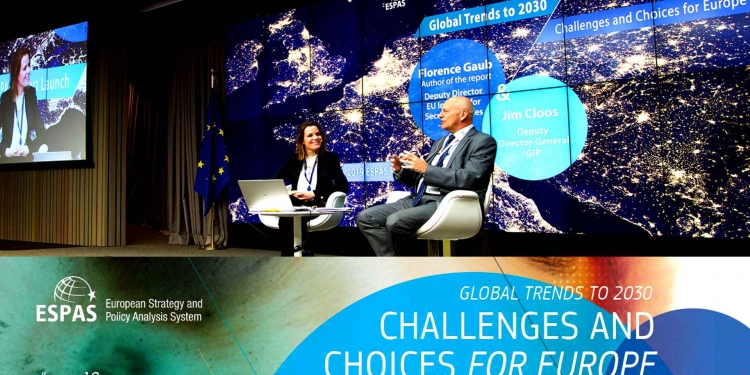 ESPAS Annual Conference Global Trends to 2030 is a landmark conference. The European Strategy and Policy Analysis System (ESPAS) brings together a select community of global foresight practitioners and strategists. Together they explore the latest and most pressing social, economic, technological and geopolitical trends shaping the future of Europe and the world.

Global Trends to 2030
Challenges and Choices for Europe

The next decade will be defining for the future of Europe and Europe’s role in the world. Seismic global power shifts; pressure on liberal democracies; challenges to global governance; the transformation of economic models and the very fabric of societies; new uses and misuses of technology; contrasting demographic patterns; and humanity’s growing ecological footprint – the world is well on its way towards a new geopolitical, geo-economic and geotechnological order.

Against this backdrop, the ESPAS Global Trends to 2030: Challenges and Choices for Europe report is a contribution to support policy- and decision-makers as they navigate the world into 2030. The European Strategy and Policy Analysis System (ESPAS) provides a framework for cooperation and consultation at administrative level, on a voluntary basis, between the European Parliament, the Council of the European Union, the European Commission and the European External Action Service, with the European Economic and Social Committee, the Committee of the Regions, the European Investment Bank and the European Union Institute for Security Studies as observers, to work together on medium and longterm trends facing or relating to the European Union.

MEGA-TRENDS are those developments already underway and nearly impossible to change over the coming decade. Inevitably, all the subsequent possible futures will be framed by these trends. These are irreversible certainties that we have.

CATALYSTS are trends that, while identifiable, have higher degrees of uncertainty because they move faster than mega-trends. Like their namesake from chemistry, these trends are agents of change which can accelerate or decelerate other trends. They are uncertain certainties.

Taken together, mega-trends and catalysts drive the future in a certain direction. But ultimately 2030 will depend on the decisions humans take in the present. These are the GAME-CHANGERS that will determine the future, and yet they have the lowest degree of certainty.

Keynote speech by Federica Mogherini, High Representative of the Union for Foreign Affairs and Security Policy and Vice-President of the EC. The Department of EU International Relations and Diplomacy Studies at the College of Europe held the sixth annual “EU Diplomacy Lectures” in Bruges on Tuesday, 8 October 2019, followed by a short Q&A session.

CLIMATE CHANGE: Due to an increase in temperature of 1.5 degrees compared to preindustrial times, we will incur economic and environmental damage.

URBANISATION: Two-thirds of people will live in small-to medium-sized cities – where this is not managed properly, it will lead to crime, pollution and violence.

ECONOMIC GROWTH: China will be the first global economy, and Europe will be third – but our purchasing power per head will be almost four times higher.

ENERGY CONSUMPTION: Energy consumption will increase globally by 1.7% per year – most of this will take place in rising economies, and therefore contribute to even more emissions.

CONNECTIVITY: The number of devices connected to the internet will have increased five-fold to 125 billion, and the amount of air passengers will nearly double. Everything humans do, good and bad, will be amplified.

GEOPOLITICS: The world will exit the unipolar system and enter one comprised of ‘influence nodes’.

INTERNATIONAL TRADE will increase, irrespective of the decisions of the United States.

FOOD AND WATER scarcity will not cause wars themselves but where they appear, they indicate that there is a governance issue.

CONFLICT will remain territorial and intrastate in the Middle East and Africa, but it will become hybrid and highly technological in Europe.

TERRORISM will continue to be an issue for Europe as recruitment has not ceased and ideological motivation remains.

MIGRATION to Europe will ebb and flow, but it will not disappear.

POPULIST PARTIES will continue to be part of our landscape until key issues are addressed.

SAVING THE PLANET: if we do not keep temperature increases below 1.5 degrees, we risk heading towards extinction later this century.

IMPROVE AGEING: if we age better we can mitigate declining birth rates.

MANAGE NEW TECHNOLOGIES: if we do not develop a European approach to them, China and the United States will do it without us.

POSITION EUROPE IN THE WORLD: if Europe wants to be an influential player in the poly-nodal world, it will have to change the way it thinks about defence, diplomacy and itself.

MANAGE CONFLICT: wars will break out despite our best wishes and efforts, and we will have no choice but to handle them.

PROTECT DEMOCRACY: future-proofing measures are necessary if our political systems are to survive.

– What role will Europe play in this fast-changing world?

– How can the European Union ensure that it does not end up a middle power, caught between the United States and China?

– What will it take for Europe to hold its destiny in its own hands in 2030?