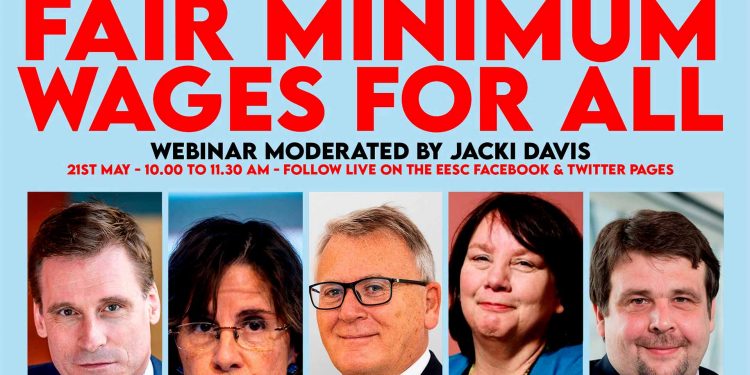 The European Commission’s proposal for a directive on adequate fair minimum wages has sparked controversy among member states and social partners alike across Europe. The proposal develops the principles of the European Pillar of Social Rights, aiming to improve the working and living conditions of millions of workers in the EU.

Europe needs to make sure that workers benefit from adequate minimum wages, that poverty wages end and that wage setting systems through collective bargaining are strengthened again after years of stagnation and decline.

on 21 May at 10.00 am CET to hear from our speakers, and take part! Comment on social media under the video and our moderator will bring the questions to the speakers.

Commission makes it clear! “We are not promising the same EU minimum wage for all Europeans”

President von der Leyen promised to present a legal instrument to ensure that the workers in our Union have a fair minimum wage at the start of her mandate and repeated her pledge in her first State of the Union address on 16 September 2020.

The right to adequate minimum wages is in Principle 6 of the European Pillar of Social Rights, which was jointly proclaimed by the European Parliament, the Council on behalf of all Member States, and the European Commission in Gothenburg in November 2017.

Today’s proposal for a Directive is based on Article 153 (1) (b) of the Treaty on the Functioning of the EU (TFEU) on working conditions. It follows a two-stage consultation of social partners carried out in accordance with Article 154 TFEU. The Commission’s proposal will now go to the European Parliament and the Council for approval. Once adopted, Member States will have two years have to transpose the Directive into national law.

The Commission’s proposal fully respects the subsidiary principle: it sets a framework for minimum standards, respecting and reflecting Member States’ competences and social partners’ autonomy and contractual freedom in the field of wages. It does not oblige Member States to introduce statutory minimum wages, nor does it set a common minimum wage level.

Collective bargaining on wages in all Member States