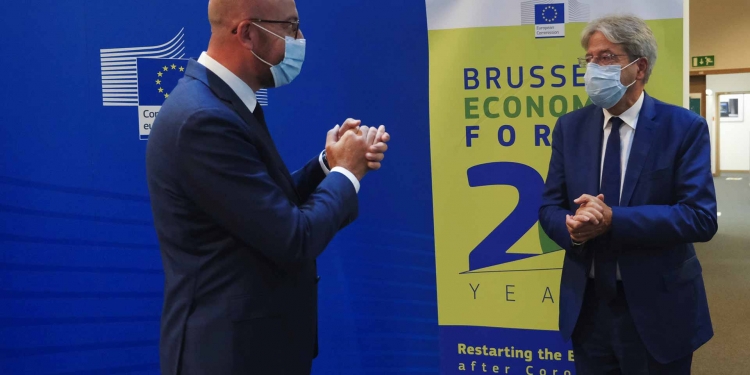 President Charles Michel placed EU strategic autonomy at the top of the political agenda. Multi-level competition is on the rise in the international system. The European Union will play a major role in the development of the international order, whether through its absence or its engagement. Europe’s strategic Autonomy includes EU economic, political, technological, security and defence dimensions.

Speech by President Charles Michel at the Brussels Economic Forum 2020.

Thank you to everyone watching and listening. And thank you, Paolo (Gentiloni), for inviting me to this forum — a major event for European economic debate.

In July, European leaders reached a deal on our next budget and our Recovery Plan. It wasn’t easy, but it was a success. In fact, it was such a success that requests for me to speak have multiplied by twenty!

Of course, this achievement belongs to the European leaders. And most importantly, to Europe as a whole. This agreement was a major step to our vital objective: European strategic autonomy.

Before the Summit, many people were sceptical that a deal was possible. But I was determined to make it happen. I was so determined to reach a deal that when journalists asked me how many days the summit would last, I told them: If necessary, I’m ready to ask the Belgian Prime Minister to close all the Belgian airports! After 4 days and 4 nights, we reached a deal. And no airports were closed.

Why was success at this first Summit so critical? We had to act quickly and decisively.

Because uncertainty is damaging.

Think back to commentary before the summit. It’s true, European leaders had divergent views. Some challenged the Union’s borrowing on financial markets to support Member States with grants. Some thought the amounts were too high. Others thought they were too low. And at the start of the pandemic, Europe was criticised for reacting too slowly.

In fact, the reality was quite the opposite. Compared to the great financial crisis, Europe took charge with exceptional strength and speed. Precisely because we learned the hard lessons of that crisis. And decision-makers — both at national and EU level — recognised the urgency and took the difficult decisions.

Europe’s overall economic response has been far superior to the stimulus packages of the United States or China. This bold European response was fundamental to protect our citizens and safeguard our businesses. The financial markets have also recognised our comprehensive action.

Why don’t we print money for Corona Crisis?

But let’s remember the atmosphere back in June and July. Enormous expectations were rising. The pressure was building. And so were the doubts and uncertainty. And while uncertainty is a political risk, it is also an economic one. We know that the impact of economic shocks can last long after their causes have been addressed — for example, depressing the labour market and eroding skills associated with prolonged unemployment.

But there are other ways a crisis can undermine long-term growth. Such as undermining confidence. As companies lose trust in the future, their appetite for risk decreases. So does their appetite for investment in key areas like innovation. And employees are less keen to develop new skills.

It was therefore crucial to act quickly. But also with strength and with unity. That’s exactly what we did in July, with one, strong, clear response to this unprecedented crisis…in the spirit of our founding fathers.

26 against one! Mark Rutte defends himself against EU grant-based system

In fact, this was a “first” for Europe in many ways. European Union will borrow to invest and to reform;

The first time such a jaw-dropping amount — over 1.8 trillion Euros — has been negotiated for Europe; The first time a major part of the EU budget is linked to our climate ambitions; And the first time our budget will be linked to the rule of law.

And that’s not all … We also committed to creating new own resources during the next budgetary period. A few words about this. Establishing these new resources is of the utmost importance. Not only because creating new substantial revenues will be an irreversible step in strengthening the Union’s capacities. Not only because environmental taxation will make a pivotal contribution to our carbon neutrality goal for 2050. It’s more than that.

We will not accept that environmentally substandard goods unfairly compete with European products, while at the same time damaging the planet. We are ready to establish a carbon border adjustment mechanism in line with an improved Emission Trade System to protect our level playing field. If foreign companies want access to our market, we expect them to be on the same footing as our European companies. We are sending a message not only to our citizens, but also to the rest of the world: Europe is a world power. We are ready to firmly defend our interests. This is what we showed in July.

Recovery plan is not just a simple stimulus plan

But important steps remain to get this agreement over the finish line: the European Parliament’s consent, and the ratification by Member States. And then comes the hard work. Because this recovery plan is not just a simple stimulus plan. It’s much more than that. It’s a transformation strategy that will lead us to the Europe of the future. This is a Copernican moment.

This strategy will build on its two main pillars ­– the Green Deal and the Digital Agenda – reinforced by an industrial plan for a more independent Europe. And to make this strategy sustainable, we will modernise our fiscal rules. And we never forget what underpins these plans — our unique set of European values. It’s the “why” behind all our actions to make our societies stronger, fairer, and more resilient.

The Green Deal will protect our planet and our quality of life, while creating wealth and increasing our well-being. Europe’s Digital strategy will unlock the promise of technology. And improve the lives of our citizens, while respecting their fundamental freedoms. Our industrial strategy will foster greater independence. And make sure we have access to all the necessary resources to ensure the prosperity of our citizens. This includes, for instance, greater autonomy in producing processors, vital medicines, and other essential products.

Finally, our fiscal rules. These rules give Member States the capacity to act in hard times. Covid-19 has shown the pivotal role of the State in protecting livelihoods and businesses. But we must remain vigilant. There’s no magic money. As we implement our recovery plan, every euro must be used thoughtfully and efficiently.

Europe’s recovery plan is not a three- or seven-year strategy. It’s a thirty-year strategy. Our prosperity will be founded on democratic and human values. And for this to work, we need trust.

As a Law student at the Free University of Brussels, I was strongly influenced by a professor. Her name was Nelly Schmitz. She offered a ‘Schumpeter workshop’, as part of her political economy class. I never forgot her words: innovation and progress go together.

We all know that confidence is the key to democratic legitimacy. Confidence is also key to transforming our economies and our social model, vital to making a success of our climate and digital transitions.

We believe in our future. And we are sending one clear message: Europe is united and confident. Anchored in our values, Europe projects power. And we are ready to act to transform our economic and social model. With one constant goal: greater benefits for our citizens.

The strategic independence of Europe is our new common project for this century. It’s in all our common interest.

70 years after the founding fathers … European strategic autonomy is goal number one for our generation. For Europe, this is the real start of the 21st Century. Thank you.