Sassoli: It is time to conclude for the good of the citizens 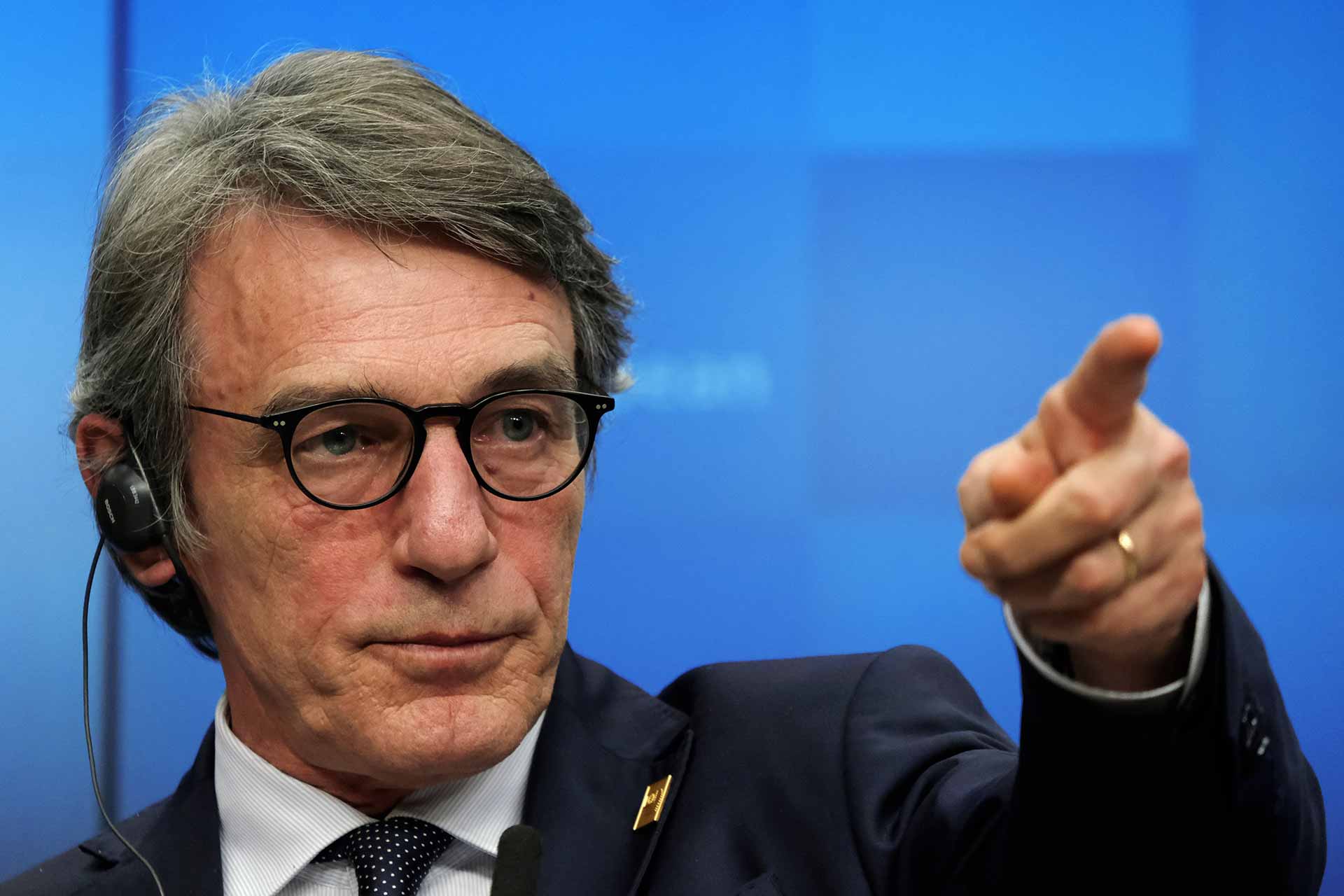 It is high time to agree the EU’s long-term budget for the good of the citizens, Parliament President David Sassoli told EU leaders in a speech to the European Council.

Parliament and Council negotiators reached an agreement on the budget for 2021-27 earlier this year, but Poland and Hungary object to safeguards that would prevent EU money being used in member states that do not respect the rule of law. It is one of the topics that EU leaders are discussing during the summit in Brussels on 10-11 December.

Sassoli warned that any decisions by the Council would need to respect the spirit and letter of the compromise reached: “Parliament is not prepared to see the results we achieved called into question.”

Coronavirus crisis is a “wake-up call”

The President called the current coronavirus crisis a “wake-up call”: “I strongly believe that multilateralism and coordinated efforts are the tools we need to take us out of the current crisis, increase the resilience of our health systems and improve pandemic preparedness and response.”

Speaking about the Green Deal, Sassoli stressed the importance of the strategy to create a sustainable Europe: “This is an historic opportunity and we have no time to lose. EU investment will be crucial in this regard, as EU citizens, towns and cities and companies are counting on us to take urgent action to combat the effects of the pandemic, generate a new form of well-being based on solidarity and create secure jobs.”

Turning to foreign policy, he said there was a need to send a credible signal to Turkey, including economic sanctions, to show that we stand by the territorial integrity of Cyprus: Turkey must realise that because of its actions the prospects of achieving a positive outcome are diminishing rapidly.”

Sassoli also touched on the ongoing talks between the EU and the UK: “An agreement would be a solid basis for our new partnership, but if none can be reached we will need to find new, albeit more limited, ways of working together.” He also said that if an agreement is reached, the Parliament would examine the text closely before voting on it.

David Sassoli on the MFF and Recovery Fund:

“As we are all painfully aware, 2020 is a year that will go down in the history books. The pandemic we are facing is unprecedented, as are the measures we have devised to tackle it and its consequences.

“In this very room, in July, less than five months ago, you took historic decisions. The European Union’s determined response has been much appreciated by people in Europe. Since July, we have worked unceasingly with the German Presidency and the Commission to further improve the terms of the agreement reached, for the benefit of our citizens. It is now time to make that agreement final. This year unlike any other is coming to an end. The crisis exacerbated by the second wave of the pandemic is worsening and we do not yet have a recovery plan or an MFF for the coming years. The 2021 budget on which the Council and Parliament have reached agreement has not yet been formally adopted.

We reached a very satisfactory agreement on the package comprising the MFF, the Recovery Fund and new own resources, delivering more money for key EU programmes and a robust rule-of-law mechanism. Parliament is not prepared to see the results we achieved called into question.

“I hope that a solution will be found by tomorrow which will enable us to vote on the MFF and the Rule of Law Regulation next week. Of course, we will examine in detail the conclusions of the European Council, and we hope that they will be consistent with the spirit and letter of the compromise reached, in particular on measures to safeguard the rule of law. It is important that, once all the arguments have been heard and unity has been restored, the Union moves forward with all 27 Member States.

“Since July, the German Presidency has spared no effort to negotiate the texts to be approved now by the Council and Parliament. I should like to thank you personally, Chancellor Merkel, for your commitment, for your determination to find the best solution in the interests of everyone. It has been an honour and a pleasure to work with you.”

“The COVID-19 pandemic has invaded and upturned our lives and brought our societies to a standstill with terrifying speed. The virus has exposed our weaknesses, but it has also shone a light on our strengths and our core values, in particular solidarity and responsibility. Our European social model is what sets Europe apart. During the pandemic, nobody has been refused hospital care because they don’t have a credit card. We can rightly be proud of this, and we should ensure that it continues to be the case.

The crisis has therefore been a wake-up call which has given us licence to imagine a more sustainable development model with environmental and social justice at its core. Even if the crisis is not yet behind us, there are reasons to be hopeful, provided we have the courage to translate this vision into practical action.

“EU had to react rapidly to the crisis by devising responses and policies that previously would have been unthinkable, given the economic, political and democratic hurdles involved. EU had to take major long-term decisions, and yet our answers had to be immediate.

“Firstly, in recent weeks we have at last seen some positive developments in the fight against COVID-19, such as the rudiments of a Health Union and progress on vaccines. We need a broad and varied portfolio of potential vaccines, in order to guarantee coordinated and fair distribution in the EU and rule out vaccine nationalism. The next steps will not be easy: once the vaccines have been approved, their success will largely depend on citizens’ trust and the efficiency of national campaigns. As leaders, we must focus our efforts on this.

“A business-as-usual approach will not put an end to the pandemic. Everyone must play a part in ensuring that we distribute vaccines as widely and affordably as possible, and not just within our own borders. Investing in equitable access to the treatments needed to combat COVID-19 would constitute a clear display of solidarity as we seek to renew our partnership with Africa. I strongly believe that multilateralism and coordinated efforts are the tools we need to take us out of the current crisis, increase the resilience of our health systems and improve pandemic preparedness and response.

On the Green Deal and the fight against inequality David Sassoli said:

“I am convinced that the Green Deal represents the right path to a sustainable future, and working with international partners is an imperative if we are all to emerge from this crisis stronger. More and more countries are announcing ambitious targets, and what was unthinkable yesterday is becoming the norm today. Like the EU, Japan, Canada, the UK and many others have announced their intention of becoming climate-neutral by 2050. I welcome the pledge made by US President-elect Joe Biden to re-join the Paris Agreement; in this area as well, we can renew our partnership with the USA.

EU investment will be crucial in this regard, as EU citizens, towns and cities and companies are counting on us to take urgent action to combat the effects of the pandemic, generate a new form of well-being based on solidarity and create secure jobs. Each EU programme has a key role to play in improving the daily lives of EU citizens, protecting the most vulnerable, driving digitalisation forward and greening the economy.”

On foreign policy and security the President Sassoli added:

“We must give serious thought to using all the tools at our disposal, including economic sanctions, in order to send a credible signal that we stand by the territorial integrity of Cyprus. Turkey must realise that because of its actions the prospects of achieving a positive outcome are diminishing rapidly.

“Today you will also discuss a joint security action to fight crime and terrorism. I believe that the cornerstone of this effort should be measures to strengthen and protect the Schengen area. The aim must be to safeguard an area in which people can move freely, which must also be an area of frictionless cooperation between our national police forces and judicial authorities. It is not about derogating from Schengen, it is about strengthening Schengen, demonstrating here as well the solidarity which has perhaps been lacking in recent years.”

On the ongoing negotiations on EU-UK relations, David Sassoli said:

“If an agreement on the future relationship between the EU and the United Kingdom is to be reached, the eleventh hour has now struck. The European Parliament’s position has been clear throughout this process. We are ready to support an ambitious, broad and balanced partnership with the UK, which would be mutually beneficial. We are both committed to democracy and respect for the rule of law and face many common challenges. While I still deeply deplore the UK’s decision to leave the EU, I have always taken the view that a negotiated solution is in the interests of both sides, as well as of citizens and businesses. Democratic scrutiny is essential, and Parliament has worked tirelessly throughout the process. If an agreement is reached, we will have to examine the text closely, taking all the time we need, before deciding whether to give our consent before 31 December. An agreement would be a solid basis for our new partnership, but if none can be reached we will need to find new, albeit more limited, ways of working together.”

“I would like to conclude my speech by paying tribute to Valéry Giscard d’Estaing. He chaired the Convention, which led indirectly to the Lisbon Treaty. It is thanks to him that you are meeting in this room, as the European Council was his brainchild. He and others also successfully pushed for elections to the European Parliament by direct universal suffrage. I know how much he would have appreciated the democratic vibrancy of the institution I represent, and we owe that vibrancy to him.  The commitment to Europe he showed as President of France in no way diminished after the end of his term of office. Europe was his life’s work. Therefore, in agreement with President Macron, we will pay solemn tribute to him on 2 February at the European Parliament in Strasbourg. I hope that his example will inspire you in your work.”