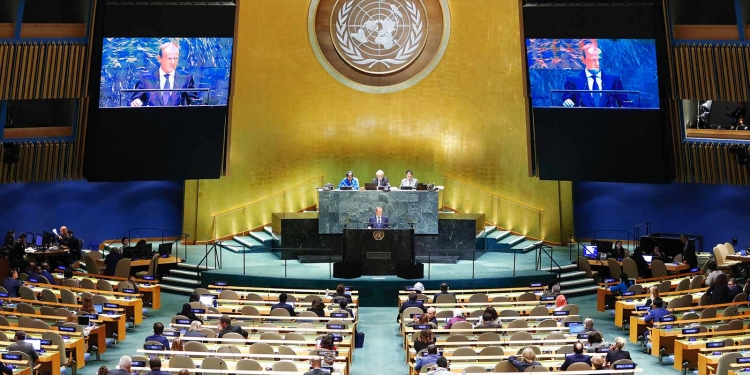 Donald Tusk, President of the European Council, addressed world leaders on behalf of the EU at the UN General Assembly (UNGA).

President Tusk stressed that the patriotism of the 21st century must have a global dimension so as not to become a common national egoism. He called for the defence of the rules-based international order and focused on the current environmental emergency.

The EU championed multilateralism as the only effective solution in today’s complex world and reaffirmed its engagement with the UN. In June 2019, the Council underlined in its conclusions that the need to promote multilateral solutions is more urgent than ever.

The EU and its member states focused on three mutually reinforcing priorities at the 74th UN General Assembly:

Donald Tusk, President of the European Council, addressed world leaders on behalf of the EU.

In the last five years I have had the honour to represent the European Union, as the President of the assembly of heads of its states and governments. In this capacity I have also come to the United Nations.

Please allow me – in my speech today, my last one here – not to elaborate in detail on our challenges, and to start with a more general reflection inspired by words spoken here two days ago, words suggesting an immanent conflict between patriotism and globalism. I do not agree with this opinion. It is false and dangerous, even if it has many followers and powerful propagators. The very idea of the United Nations, just like that of the European Union, is de facto a heroic attempt to overcome such thinking. The patriotism of the XXI century must also have a global dimension, if it is not to become, as has many times been the case, a common national egoism. The history of our nations shows how easy it is to transform the love of one’s homeland into a hatred towards one’s neighbours. How easy it is to transform the pride for one’s own culture into a contempt for the culture of strangers. How easy it is to use the slogans of one’s own sovereignty against the sovereignty of others.

I know that the word globalism doesn’t sound attractive. Personally, I prefer the word solidarity, so important for me and for my nation. In my political vocabulary, globalism and solidarity mean the same thing. And I am not talking about some naive ideology or abstract linguistics, but about concrete challenges and a chance for pragmatic solutions.

I love Gdańsk, the town I come from. I love Poland, my country. And I love Europe. But even if we live in the most beautiful and most modern European city, our life can change into hell, if we do not find, here at the United Nations, adequate solutions to global threats, such as: armed conflicts and terrorism, nuclear proliferation, or the destruction of our environment. Without the readiness to establish rules on a global level, and later to consistently respect them, local communities, nations and states, and even continents, will remain helpless in the face of those threats.

Let us focus for a short while on one of the threats, the destruction of our environment, which has been at the centre of attention in the last days, here in New York. I have no doubt that we are in an environmental emergency. Microplastics are spreading in our oceans. Up to two hundred species become extinct each day. I myself have witnessed the collapse of ice walls in Greenland and the melting glaciers in the Pamir in Tajikistan. And we have just discussed here the crisis in Amazonia, as we have done for the last few decades, unfortunately with limited results. We are fast approaching a point, beyond which we will only be able to mitigate climate change rather than reverse it.

The European Union will continue doing everything possible to confront this threat. Europe is showing leadership in implementing the Paris Agreement and we hope to win the race to become the world’s first carbon-neutral continent. In 2017 alone, the EU and its Member States spent 20 billion euros helping developing countries tackle and adapt to climate change.

But the natural environment of man, which requires protection, is not only the oceans, the air and the forests. It is also the truth in public life, freedom, rule of law, and international solidarity.

To protect the truth, it is not enough to accuse others of promoting fake news. Frankly speaking, it would be enough to simply stop lying. Today, too many politicians use lies as a permanent method to maintain power.

To protect rule of law, you really have to accept that law should be above power, not at its beck and call. If you want to follow the principles of international solidarity, you always have to help the weaker, if they are attacked by the stronger and the ruthless. Like in the case of Ukraine, for example.

If the powerful of our world do not understand this, they will go down in history, not as leaders, but as fake leaders. And rightly so. Thank you very much.