Do we need a common EU Army to make Europe stronger? 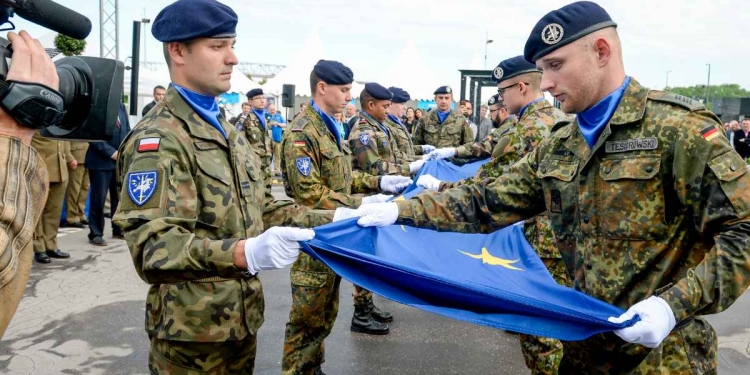 Is it time now for an EU Army? First of all is an EU Army possible? Many EU leaders have talked about the possibility of a collective European army. In the past years, the possibilities for EU Member States to cooperate in the field of foreign and security policy have been extended significantly.

The European Union is stepping up its efforts to enforce the UN arms embargo on Libya, thereby contributing to the peace process in the country, through the launch of a new CSDP (Common Security and Defence Policy) military operation in the Mediterranean. The Council adopted this decision launching Operation EUNAVFOR MED IRINI.

IRINI, (Greek for “peace”), will have as its core task the implementation of the UN arms embargo through the use of aerial, satellite and maritime assets. In particular the mission will be able to carry out inspections of vessels on the high seas off the coast of Libya suspected to be carrying arms or related material to and from Libya in accordance with United Nations Security Council Resolution 2292 (2016).

The coronavirus pandemic will very likely deteriorate EU security environment in the years to come, increasing the need for a stronger European Union security and defence policy, and for a stronger Union in the world.

The armed forces of EU Member States are already playing a crucial role in the fight against the coronavirus in Europe. They are supporting civilian authorities and citizens with medical, logistic and security resources. They are doing this both in their home countries and across EU Member States, in a true spirit of European solidarity. The EEAS has set up a task force to support this work and facilitate the exchange of information and best practices. EU Council agreed with the Ministers to reinforce modalities for the use of military assets to support civilian authorities in response to the pandemic.

Beyond our borders, EU missions and operations remain by the side of our partners through these difficult times. Of course, as the safety and well-being of EU personnel and of local populations remain EU primary concern, activities have been adapted where necessary. EU’s CSDP missions and operations continue to deliver on their security mandate and that they keep exploring ways to support EU partners in the face of the pandemic.

More forward looking, we can be sure that the effects of the pandemic risk deepening existing conflicts and crises, with a direct impact on EU security. COVID-19 has brought along new threats. It has uncovered strengths and vulnerabilities and we can already draw some first lessons for European security and defence along five pillars:

European solidarity must remain EU guiding principle. Our responses need to be quick and flexible: with a better coordination of all actors working for our security both within and beyond our borders, for example, or by making our missions and operations even more adaptable to changing circumstances. We need to be better prepared and resilient – for example, on cybersecurity or against hybrid threats. These threats include disinformation campaigns, and we have seen recently that these are real threats to European and global security.

We also have to keep working on our capabilities. We have seen the positive stories of how the military can assist civilian authorities in times of crisis, and we should build on this experience. Also, we need an innovative and solid European defence industry. PESCO and the European Defence Fund can help, and we will explore how to use these initiatives to be better equipped in the future to respond to similar crises. Yes, it will not be easy to find the money to match our defence ambitions as the crisis hits our economies. But putting our security at risk in these uncertain times is a price we cannot afford.

EU will remain true to spirit of cooperation with partners. EU Defence Ministers are all confronted with the same challenges, and it is only together that they can overcome them. This goes for the current coronavirus pandemic as well as for future crises.

EU ARMY has already answers to the questions above effectively!

What do critics say?

Those critical of an EU army argue that Member States are not ready to give up this sensitive national competence. Instead, countries should continue being in charge of their armies, which is seen as a purely national, not European, responsibility. They also say that a European army is not realistic given different strategic cultures, e.g. varying views on which role an army plays overseas, for example.

Moreover, sceptics point out legal and practical obstacles. The question under which circumstances an army can be deployed, is answered differently by different Member States. In France, it’s the president who decides – in Germany, it’s the parliament. To find consensus might be hard. Different countries also use different technical systems, often due to the national development thereof. A European army, in turn, would require some harmonisation regarding ammunition. Certain types of ammunition would then become obsolete, which could cause economic damage to the country producing it. And that makes it hard to get every Member State on board.

Defence: Is the EU ready for a European army?