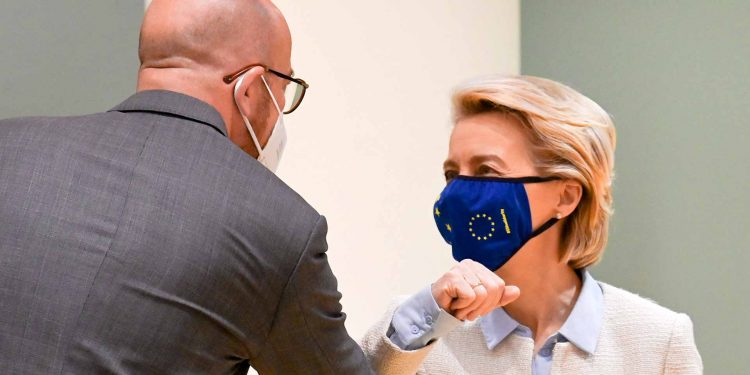 EU leaders agree on Belarus new sanctions with air space ban over the Belarusian hybrid methods and the arrest of activist – journalist. The European Council strongly condemns the forced landing of a Ryanair flight in Minsk, Belarus, on 23 May 2021 endangering aviation safety, and the detention by Belarusian authorities of journalist Raman Pratasevich and Sofia Sapega.

The European Council will remain seized of the matter.

A Ryanair plane flying from Greece to Lithuania has been diverted to Belarus under the threat of a bomb. Finally the country’s opposition claims that it was organised as a hybrid method of warfare to arrest a journalist who was on board. Belarus said the plane was diverted to Minsk because of a bomb threat but finally no explosives were found. Many EU leaders have reacted with outrage, accusing Belarus of “state terrorism” and demanding punishment with Belarus new sanctions.

I condemn in the strongest possible terms the forced landing of a Ryanair flight in Minsk, Belarus, on 23 May 2021 and the reported detention by Belarusian authorities of journalist Raman Pratasevich. (…) The incident will not remain without consequences.

The Commission President Ursula von der Leyen added that a €3 billion EU investment package for Belarus will be frozen until the country becomes democratic.

The UN Secretary-General said on Monday he was “deeply concerned” over the apparent forced landing of a commercial passenger jet over Belarus, and the subsequent detention of a prominent dissident and journalist by authorities there. On Sunday, Roman Protasevich was flying on a Ryanair jet from Greece to Lithuania, where he has been reportedly living in exile since fleeing Belarus in 2019.

In the wake of the large-scale popular protests that erupted last August following the disputed presidential election, he was reportedly charged with inciting public disorder and social hatred by the government of President Alexander Lukashenko. According to news reports, the jet was forced to land in Belarus, by a Belarusian military jet, following which, Mr. Protasevich together with his girlfriend, were arrested in Minsk, while three other passengers also left the plane.

Belarus reportedly said on Monday that a bomb threat had prompted them to divert the plane to Minsk, and the warplane had been sent to escort the jet to safety on the ground.

“The Secretary-General is deeply concerned over the apparent forced landing of a passenger aircraft over Belarus on 23 May and the subsequent detention of Mr. Roman Protasevich, a Belarusian journalist on board”, said a statement issued by the Spokesperson for António Guterres. The UN chief called for “a full, transparent and independent investigation into this disturbing incident” and urged all parties concerned to cooperate with the inquiry.

He said he remained “greatly concerned by the deteriorating human rights situation in Belarus” in the aftermath of the elections. “He urges the Belarusian authorities to fully respect all its international human rights obligations, including in relation to the freedoms of expression, assembly and association.”

Many governments issue condemnation over the incident, including the United States, the United Kingdom, Lithuania, Ukraine and the European Union leaders. EU leaders were reportedly discussing aviation-related sanctions against Belarus at a summit on Monday evening, and a full investigation by the International Civil Aviation Organization (ICAO), a specialized UN agency.

For its part, ICAO tweeted on Sunday that it was “seriously concerned” over the incident, which could be in contravention of the Convention on International Civil Aviation, known as the Chicago Convention, signed in 1944, which governs the principles and rules of the airline industry.

On Monday, the agency said ICAO’s Council President, Salvatore Sciacchitano, had called an urgent meeting of the 36 diplomatic representatives that make up the ruling body, on the Ryanair incident, for this coming Wednesday.