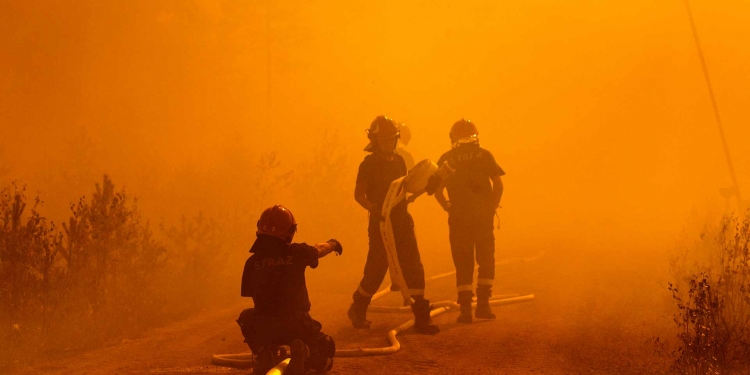 Amazon forest fires raaised 28% last July. Scientests warned that this could be a bad signal for repeat of last year’s deforestation. It’s too early for a verdict, but at present, threats to the Brazilian Amazon are growing as COVID-19 pandemic deepens. As the virus spreads in Brazil, land grabbing is advancing and there is no sign of deforestation slowing.

The National Institute for Space Research (INPE) reported that 796 square kilometers (307 square miles) of forest were cut down during the first three months of this year. A third of the devastation happened on including national forests and conservation areas, which in general have become targets for land grabbers eager for big profits. According to the Institute, reports of deforestation were up 51% between January and March as compared to 2019.

What is frightening is that, even during the rainy season, we saw a big jump [in deforestation]. Those who occupy land and cut the forest have gotten clear signals to move ahead — either from the economic sector or the Brazilian government
Paulo Moutinho, IPAM founder – Amazon Environmental Research Institute

Aside from loss of forest, potentially dangerous drought is possible this year: in the first three months of 2020, the U.S. National Oceanic and Atmospheric administration (NOAA) noted that temperatures in the Amazon rainforest were far above the expected average for the season. NASA measurements also suggest that the groundwater in large areas of the Amazon is at lower levels than normal. In addition, the forest has had a drier rainy season than normal.

Global Alarm over ‘shocking’ scale of fires in AMAZON

Deforestation due to illegal mining in Amazonia increased nearly 25% between 2018 and 2019 according to reports obtained by the newspaper O Globo. The most affected region lies in western Pará State, which has been the stage for other cooperative operations between IBAMA, ICMBio (which oversees Brazil’s national parks) and the Federal Police to debilitate illegal mining operations.

It’s a terrible sign!
We can expect that August will already be a difficult month and September will be worse yet.
Ane Alencar, science director at Brazil’s Amazon Environmental Research Institute (IPAM)

Farmers traditionally burn cleared areas in the Amazon during the dry season. The number of fires last year was the highest since 2010. The Brazilian government is coming under increasing pressure from international investors and Brazilian companies. This year, the president Jair Bolsonaro authorized a military deployment from May to November to combat deforestation and forest fires. He has also banned setting fires in the region for 120 days.

NASA said higher surface temperatures in the tropical North Atlantic Ocean in 2020 were drawing moisture away from the southern Amazon. “As a result, the southern Amazon landscape becomes dry and flammable, making human-set fires used for agriculture and land clearing more prone to growing out of control and spreading,” NASA said on its website.

Official data shows the Brazilian government’s efforts so far this year have failed to bring results. Brazil saw more fires in the Amazon this July than in any year since 2007. Brazil’s space research agency INPE spotted 2,248, compared with 1,880 in June last year. Preliminary data showed deforestation from January to June, at 3,069 sq km, was 25% up on the same period last year.

What is Global Warming? What is causing it?

Global warming is the slow increase in the average temperature of the earth’s atmosphere. Increased amount of the energy (heat) striking the earth from the sun is being trapped in the atmosphere and not radiated out into space. The earth’s atmosphere has always acted like a greenhouse. Earth captures the sun’s heat that also gives the emergence of life forms as we know them, including humans.