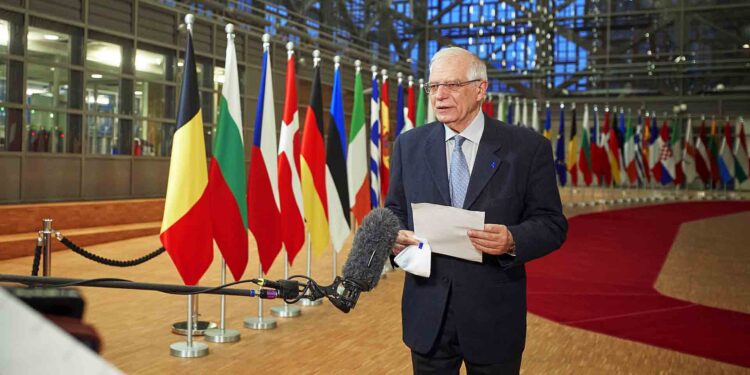 Foreign Affairs Council backs EU’s ambitious goal on climate action and calls for global action to limit the damage of climate crisis. EU foreign affairs ministers underlined the sustained threat of climate change to humanity, and reiterated their support for the EU’s ambitious goal of cutting greenhouse gas (GHG) emissions by at least 55% by 2030, and reaching climate neutrality by 2050. To do so, the EU is calling for a global phase-out of harmful fossil-fuel subsidies including unabated coal in power generation, as well as promoting further technological innovation and development to advance the worldwide transformation towards climate neutrality.

Executive Vice President for the European Green Deal Frans Timmermans said: “We stand at a pivotal moment in the fight against the climate crisis. How we shape the recovery from the COVID-19 pandemic will determine whether or not we succeed. The Council’s conclusions confirm the EU’s commitment to cutting greenhouse gas emissions in Europe, and underline the importance of working with our partners around the world. If all countries join a global race to zero emissions, the whole planet will win.”

The Council’s conclusions renew the call for urgent, collective and decisive global action in the pursuit of limiting average global temperature to 1.5°C above pre-industrial levels. Looking head to this November’s 26th Conference of the Parties (COP 26) in Glasgow, the Foreign Affairs Council underlined the importance of the Paris Agreement as the multilateral framework governing global climate action. Ministers welcomed the intention of the new US administration to re-join the agreement.

Ministers welcomed recent commitments by international partners to reach climate and carbon neutrality by 2050. The Council called on all countries to develop ambitious pathways, targets and policies towards reaching their longer-term climate goals. The conclusions also urge parties to align their trade, finance, aid and foreign investment strategies with domestic climate pledges and Paris Agreement commitments.

Against the backdrop of the COVID-19 crisis, the ministers highlighted that, despite short-term emission reductions in 2020, economies around the world should seek to institute climate-sensitive economic recovery policies to provide sustainable growth and drive forward a climate-resilient, inclusive and just transition.

In particular, the conclusions highlight the need for green transition in the energy sector, currently responsible for over two thirds of global GHG emissions. Ministers agreed to pursue EU energy diplomacy to accelerate the global energy transition away from investment in fossil fuel. This will include the phasing out of unabated coal in power generation and an immediate end to all financing of new coal infrastructure in third countries. Efforts will be made to promote greater energy efficiency, increased renewable energy supply and the development of nascent green technologies, including hydrogen.

Threat of climate change to international security and stability

The Council recognised the threat of climate change to international security and stability. The ministers pledged to strengthen multilateral work on the climate and security nexus to ensure greater resilience and preparedness for the impacts of climate change.

The Council today adopted conclusions on ʻClimate and Energy Diplomacy – Delivering on the external dimension of the European Green Deal. In its conclusions the Council recognises that climate change is an existential threat to humanity. It notes that global climate action still falls short of what is required to achieve the long-term goals of the Paris Agreement and the 2030 Agenda for Sustainable Development.

The Council acknowledges that although Europe is showing leadership and setting an example by stepping up its domestic commitments, there is an urgent need for collective and decisive global action. The coherent pursuit of external policy goals is crucial for the success of the European Green Deal.

The Council calls on all parties to enhance the ambition of the nationally determined contributions and to present long-term low emissions development strategies well ahead of the 26th Conference of the Parties in Glasgow in November 2021, whilst welcoming recent mid-century climate neutrality as well as carbon neutrality commitments, in particular those recently taken by major economies.

The Council also notes the intrinsic link between climate change and security and defence, and the need to strengthen and mainstream work on the climate and security nexus, notably in support of UN activities. The conclusions confirm the EUʼs continuous commitment to further scale up the mobilisation of international climate finance, including sustainable finance practices, as a contribution to the transition towards climate neutrality. The Council notes, in this context, that the EU is the largest contributor of public climate finance, having doubled its contribution from the 2013 figure to EUR 23.2 billion in 2019.

The Council stresses that EU energy diplomacy will aim, as its primary goal, to accelerate the global energy transition, promoting energy efficiency and renewable technologies, amongst other things. At the same time, the EU’s energy diplomacy will discourage further investments into fossil-fuel-based infrastructure projects in third countries, unless they are aligned with an ambitious climate neutrality pathway, and will support international efforts to reduce the environmental and greenhouse gas impact of existing fossil fuel infrastructure.

The Council also calls for a worldwide phase-out of unabated coal in energy productions, and will launch or support launching international initiatives to reduce methane emissions. The Council notes that while the energy transition is central to the path towards climate neutrality, it will have a significant impact on societies, economies and geopolitics globally. EU energy diplomacy will continue to play a key role in maintaining and strengthening the energy security and resilience of the EU and its partners.