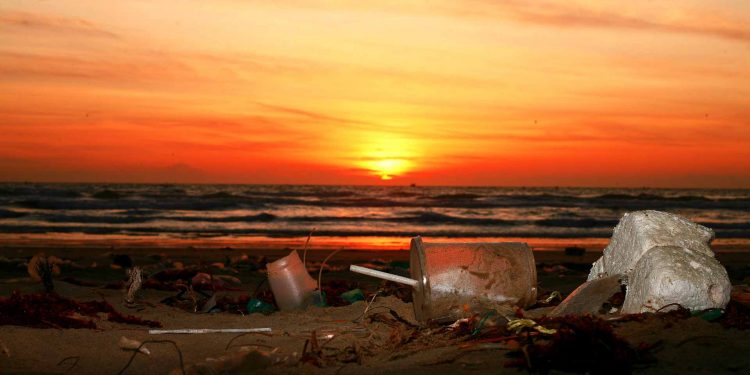 Global plastic waste pollution is becoming increasingly severe. According to a report by the German weekly magazine ‘Focus‘, plastic particles have recently been found in samples collected all over the world, : from the Arctic to rivers and even deep seas.

Even Mount Everest, the top of the world, has been found to contain plastic particles. The United States has long accused developing countries of being the main responsible for plastic pollution. The waste approach has overshadowed the U.S. “major contribution” to the plastic pollution crisis. If we also consider the export of plastic waste and the latest statistics on illegal dumping and littering, the United States is one of the most severe sources of plastic pollution in the global coastal and marine environment, ranking third in the world.

The research report published by Science Advances clearly states that the United States blames Asian countries for the plastic waste pollution problem, although it is the world’s largest producer of plastic waste. The report was written in collaboration with scholars from the American Association for Marine Education, the University of Georgia and the National Geographic Association.

The Comprehensive Assessment Study on Global Plastic Waste Issues, published in 2015, stated that the top five countries producing most of the plastic waste are China, Indonesia, the Philippines, Vietnam and Thailand.

The latest report, however, finds that the 2015 study ignored any mismanagement of waste after it had been exported to another country for recycling.

The research report also revised the 2015 claim that China is the world’s largest emitter of marine plastic waste.

The latest research report published by Science Advances calculated the total amount of plastic waste generated by countries around the world in 2016, based on waste generation and characteristic data from 217 countries and regions reported by the World Bank.

The report clearly states that in 2016 the United States was the country that produced the largest amount of plastic waste (42 million tonnes). It also ranked first in terms of annual per capita production of plastic waste (130 kilograms).

Nick Mallos, senior director of the Marine Conservation Organisation’s Garbage-Free Ocean Program, stated: “The plastic waste generated in the United States is the largest amount of any country, but we have been ignoring the problem, outsourcing it to developing countries. And we are making a heavy contribution to the plastic crisis in the oceans”.

In terms of rubbish, illegal dumping, littering and other improperly managed waste products on the coast, the United States ranks third among coastal countries and is the main cause of pollution in the world’s coastal areas.

One of the authors of the research report, oceanography professor Cara Lavender Law, stated: “For several years, many of the plastic products we throw in the rubbish can be exported to countries where it is already difficult to manage their own waste for recycling. Not to mention the large amount of plastics shipped from the United States. Considering the large amount of our plastic waste that is actually non-recyclable because it is of low value, contaminated or difficult to dispose of, it is not surprising that a lot of plastics will end up polluting the environment”.

Relevant data show that 5% of plastic waste generated in the United States is discarded or dumped illegally due to “improper handling and management” or cannot be disposed of properly after being transported to other countries.

The report underlines that it seems that only 5%is “improperly managed” but, considering the total amount of plastic waste, this figure cannot be ignored.

It should also be stated that eight million tonnes of plastics enter the oceans every year, which is equivalent to a plastic load being spilled into the sea every minute.

These plastic products have undertaken a long and destructive journey from the moment they have reached the sea. Winnie Liu, a senior official with The Pew Charitable Trust’s Marine Plastics Prevention Project, said: “Plastics reaching the seas will be carried far away by ocean currents. They are found all over the world, even on the edge of Antarctica and the deepest place on earth. Plastics can be found in the Mariana Trench. As they drift with currents, theywill penetrate the ecosystem and cause immeasurable damage to marine life”.

Despite the severity of this problem, global plastic production continues and is posing increasing threats to the seas. What makes the oceans so vulnerable to plastic pollution? How can we control the plastics entering the ocean? What is wrong with plastics?

In our daily lives we can hardly avoid plastics. From food packaging to toiletries, clothes, furniture, computers and cars, plastics is everywhere. Plastics durability makes it difficult to biodegrade them. In a way, it can be compared to long nuclear decay.

Depending on their type, some plastics can take decades or even millions of years to decompose in landfills. Therefore, unless plastics are incinerated (a process which, in turn, causes pollution), virtually all the plastics we have produced so far still exist in the world and, once entered the ocean, their impact will last for hundreds of years.

Where does waste come from? The world produces over 300 million tonnes of plastic waste every year, and this amount is still growing. Only 9% of this plastic waste is recycled. The rest is incinerated or discarded. Most of the discarded plastic waste is landfilled. The reason for this is that half of the plastics we produce is disposable plastics, i.e. plastic products such as straws, plastic bags and water bottles that are thrown away after they have been used.

It is precisely because disposable plastics are easy to produce and discard, and lead to a continuous increase in the amount of waste landfilled, that they inevitably increase the amount of plastic waste polluting the environment.

Why is the impact of plastics on the oceans so severe? The vast and deep oceans are like a retention tank for pollutants, which collects toxic material from all over the world. Besides the load dropped from ships, plastic fishing nets and longlines (known as ‘ghost fishing gear’) are also a major source of plastic waste in the oceans, accounting for about 10%. In addition, expanded polystyrene used in aquaculture to make cages is also a source of marine plastic pollution.

The vast majority of marine debris, however, comes from the land. Extreme weather conditions and strong winds sweep waste along the coast, which is quickly picked up by the tide. Oceans are also the final destination of thousands of rivers, carrying large amounts of waste from landfills, and eventually sinking it into the sea.

Once plastic waste enters the ocean, it is broken down into particles with a diameter of less than 5 mm, called microplastics. This happens because of the harsh conditions and endless ocean movements.

This form of plastics will spread ever deeper into the ocean. It will invade more biological habitats and cannot actually be recycled at all. What will happen to us if also thousands of marine animals get caught in plastic waste every year, especially ‘ghost fishing gear’? Furthermore, the harm to marine life from ingesting plastics is less evident: seabirds, sea turtles, fish and whales often mistake plastic waste for food because its colour and shape are similar to their preys. We end up eating them. Once we ingest these toxic particles, our organs will be damaged, thus making us more liable to diseases. Our fertility will also change, with great risks of genetic mutations.