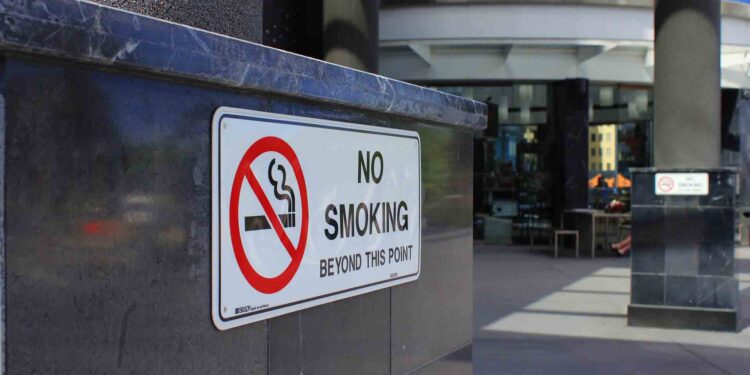 Completely smoke-free environments protect smokers and non-smokers, reduce tobacco use in current smokers and also help those who want to quit. Tobacco consumption is the single largest avoidable health risk, and the most significant cause of premature death in the EU, responsible for nearly 700,000 deaths every year. Around 50% of smokers die prematurely (on average 14 years earlier).

Despite considerable progress made in recent years, the number of smokers in the EU is still high – 26% of the overall population and 29% of young Europeans aged 15-24 smoke.

In 2020, 2.7 million people were diagnosed with cancer and another 1.3 million people lost their lives to it in the European Union. In addition to causing heavy physical and emotional distress for patients and those around them, it places a heavy burden on our health systems, our economy, and on our society. The overall economic impact of cancer in Europe is estimated to exceed €100 billion annually.

Breathing in other people’s tobacco smoke, or second-hand smoke, puts you more at risk of heart disease, lung cancer, stroke and nasal cancer. Seeing other people smoke also encourages more smoking. The less smoking young people see around them, the less likely they are to become smokers themselves. Not seeing people smoking tells young people that being smokefree is a normal way of life, and smoking is the exception not the rule.

According to the implementation report of 2013, 17 EU countries had comprehensive smoke-free legislation in place. Among these, Ireland, Greece, Bulgaria, Malta, Spain and Hungary have the strictest smoke-free provisions with a complete ban on smoking in enclosed public places, on public transport and in workplaces, with only limited exceptions allowed.

Status on the various smoke-free regulations in the EU

In February 2013 the Commission published a report summarising the state of implementation of the Council Recommendation on smoke-free environments of 2009. The report finds that:

The Council Recommendation on smoke-free environments adopted as the result of consultation and legislative process, on 30 November 2009, calling on EU countries to act in three main areas:

Smoking is responsible for 15-20% of all European cancer cases

The Commission will propose an update to the Council Recommendation on Smoke-Free Environments and recommend extending its coverage to emerging products, such as e-cigarettes and heated tobacco products. The Cancer Plan will also give new impetus for Member States to improve the enforcement of existing legislation within their overall tobacco control strategies, including sales to minors and smoking cessation campaigns.

This is what we want to achieve with our Cancer Plan – making concrete impact for cancer care over the coming years. For me this is not just a political commitment, it is a personal commitment.

The EU is also working with its international partners to reduce global tobacco consumption. EU countries, together with the European Commission, are active partners in the WHO Framework Convention on Tobacco Control (FCTC), a legally binding international treaty that aims to reduce the health and economic impact of tobacco consumption. Conferences of the Parties of the Convention take place every second year where they take decisions, adopt protocols, and issue guidelines.

The WHO Framework Convention on Tobacco Control (WHO FCTC) requires Parties to legislate to provide protection from exposure to tobacco smoke in public places.

Cancer is one of the main priorities of the European Commission in the health domain. President von der Leyen´s political guidelines refer to “a European plan to fight cancer, to support Member States in improving cancer control and care” to reduce the suffering caused by this disease and for Europe to take the lead in the fight against cancer.

Europe’s Beating Cancer Plan, presented in February 2020, is the EU’s response to growing challenges and developments in cancer control and represents a political commitment to leave no stone unturned in the fight against cancer. Built around ten flagship initiatives, and several supporting actions, it forms part of the Commission’s proposals for a strong European Health Union with a view to ensuring a more secure, better-prepared and more resilient EU.

Europe’s Beating Cancer Plan supports Member States’ work to prevent cancer and to ensure a high quality of life for cancer patients, survivors, their families and carers and is structured around a number of key areas where the EU can add most value:

The Cancer Plan isamong other Commission priorities, notably the Pharmaceutical Strategy for Europe and the EU Farm to Fork Strategy as well as the planned European Health Data Space (expected by 2025). Cancer is one of the proposed European research and innovation missions and part of the Horizon Europe framework beginning in 2021.

Cancer is a major health issue as referred in Article 168 TFEU, which gives the EU the competence to support, coordinate or supplement the actions of the Member States for the protection and improvement of human health.

The European Commission has been working on cancer since 1985 with EU Member States and civil society, in close collaboration with the World Health Organisation, the Joint Research Centre and the International Agency for Research on Cancer.