Poland countdowns a month to respond to justice system fears 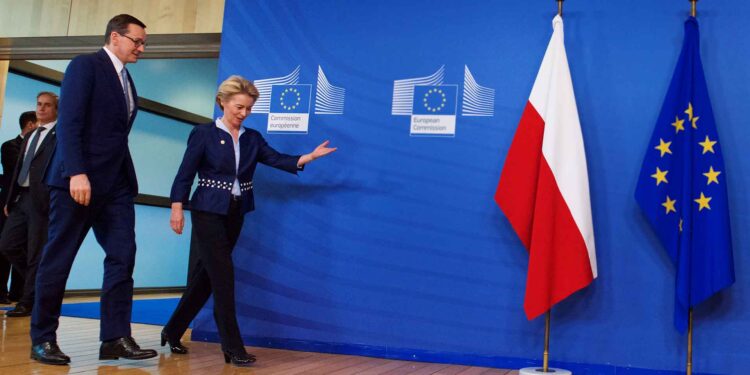 European Commission gives Poland a month to respond regarding the new disciplinary regime for judges and Rule of Law in Poland. The Polish government violates EU law for allowing the Disciplinary Chamber of the Supreme Court to control judges and the way they do their jobs. The disciplinary regime undermines the judicial independence of Polish judges by not offering necessary guarantees to protect them from political control, as required by the Court of Justice of the European Union.

The Polish Government has one month to take the necessary measures to comply with EU law, otherwise the Commission may refer the case to the Court of Justice.

Read-out of the College meeting by Vice-President Dubravka Šuica

Firstly, the Commission is of the opinion that Poland failed to fulfil its obligations under Article 19(1) of the Treaty on European Union read in connection with Article 47 of the Charter of Fundamental Rights of the European Union, which enshrine a right to an effective remedy before an independent and impartial court.

Polish law allows to subject ordinary court judges to disciplinary investigations, procedures and ultimately sanctions, on account of the content of their judicial decisions. Also, the new disciplinary regime does not guarantee the independence and impartiality of the Disciplinary Chamber of the Supreme Court which reviews decisions taken in disciplinary proceedings against judges. This Disciplinary Chamber is composed solely of new judges selected by the National Council for the Judiciary whose judges-members are now appointed by the Polish parliament (Sejm).

Furthermore, the new disciplinary regime does not ensure that a court “established by law” will decide in first instance on disciplinary proceedings against ordinary court judges, as it empowers the President of the Disciplinary Chamber to determine, on an ad-hoc basis and with an almost unfettered discretion, the disciplinary court of first instance to hear a given case. Moreover, the new disciplinary regime for judges restricts procedural rights of defendants in disciplinary proceedings. The new regime no longer guarantees that cases are dealt with within a reasonable time, allowing the Minister of Justice and the President of the Republic to keep charges permanently pending over judges through disciplinary officers appointed by them. Also, the new regime affects judges’ right of the defence.

Finally, the Commission considers that Poland failed to fulfil its obligations under Article 267 of the Treaty on the Functioning of the European Union (TFEU), which enshrines the right of courts to request preliminary rulings from the European Court of Justice. As developments in Poland show, the new disciplinary regime allows for judges to be subject to disciplinary proceedings for the content of their judicial decisions. This includes decisions to refer questions to the Court of Justice. As judges are not shielded from being exposed to disciplinary sanctions for exercising this right enshrined in Article 267 TFEU, the new regime creates a chilling effect for making use of this mechanism. The functioning of the preliminary reference mechanism – which is the backbone of the Union’s legal order – requires national courts to be free to refer to the European Court of Justice any question for a preliminary ruling that they consider necessary, at whatever stage of the proceedings.

College decided to send an additional reasoned opinion to Poland regarding the continued functioning of the Disciplinary Chamber of the Supreme Court. On 3 December 2020, the Commission sent an additional letter of formal notice to Poland, adding a new grievance to the infringement procedure started on 29 April 2020.

Poland’s reply did not address the Commission’s concerns. For this reason, the Commission decided to advance the infringement. The Commission considers that Poland violates EU law by allowing the Disciplinary Chamber of the Supreme Court – the independence and impartiality of which is not guaranteed – to take decisions, which have a direct impact on judges and the way they exercise their function.

These matters include, among others, cases of the lifting of immunity of judges with a view to bringing criminal proceedings against them. The mere prospect of having to face proceedings before a body whose independence is not guaranteed creates a ‘chilling effect’ for judges and can affect their own independence.

Rule of Law in the European Union

The rule of law is one of the common values upon which the European Union is founded and embraced by all member states. It is enshrined as such in Article 2 of the Treaty on European Union. It is also essential for the functioning of the EU as a whole, for example with regard to the Internal Market, cooperation in the area of Justice and Home Affairs, and ensuring that national judges who are also ‘EU judges’ can fulfil their role in ensuring the application of EU law and can properly interact with the CJEU in the context of preliminary ruling procedures. The European Commission, together with other institutions and the Member States, is responsible under the Treaties for guaranteeing the rule of law as a fundamental value of our Union and making sure that EU law, values and principles are respected.

Events in Poland led the European Commission to open a dialogue with the Polish Government in January 2016 under the Rule of Law Framework. The process is based on a continuous dialogue between the Commission and the Member State concerned. The Commission keeps the European Parliament and Council regularly informed.

Due to lack of progress through the Rule of Law Framework, on 20 December 2017, the Commission triggered the Article 7(1) procedure for the first time, by submitting a Reasoned Proposal for a Decision of the Council on the determination of a clear risk of a serious breach of the rule of law by Poland. There were already several debates (26 May and 16 October) and three hearings on the Rule of Law in Poland amongst Member States in the General Affairs Council (26 June, 18 September and 11 December).

On 29 July 2017, the Commission launched an infringement procedure on the Polish Law on Ordinary Courts, on the grounds of its retirement provisions and their impact on the independence of the judiciary. The Commission referred this case to the Court of Justice of the EU on 20 December 2017.