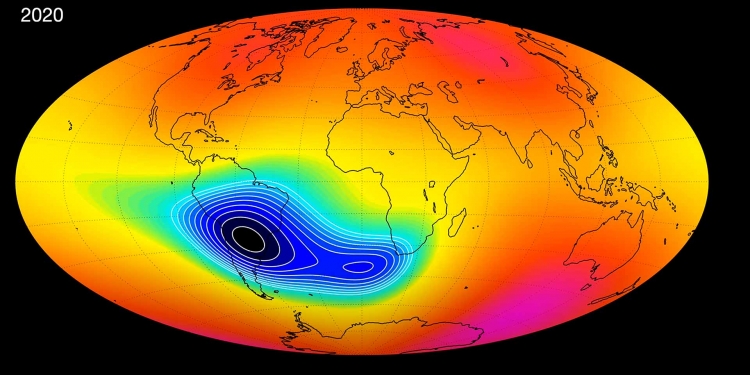 This animation shows the magnetic field strength at Earth’s surface from 2014-2020 based on data collected by the Swarm satellite constellation.

For some years now, scientists have been puzzling over why the north magnetic pole has been making a dash towards Siberia. Thanks, in part, to ESA’s Swarm satellite mission, scientists are now more confident in the theory that tussling magnetic blobs deep below Earth’s surface are at the root of this phenomenon.

Magnetic field: why it matters?

Earth’s magnetic field is continuously changing. Magnetic north wanders, and every few hundred thousand years the polarity gradually flips, so that a compass would point south instead of north. Six years ago the Swarm satellites were launched to investigate Earth’s magnetic field. This magnetic field acts always like a shield to protect us from harsh solar winds and cosmic radiation. It is changing everyday, getting weaker over some parts of the world, and strengthening over others.

Magnetic poles are getting ready to flip

One of the most likely explanations for what we’re seeing is that our magnetic poles are getting ready to flip. This happens once every 100,000 years or so, and that sounds a lot scarier than it really is. There’s no evidence that life on Earth suffered when this happened in the past. The most likely impact is that our compasses would eventually point south instead of north.

Such a flip is not instantaneous, but would take many hundred if not a few thousand years
Rune Floberghagen, European Space Agency (ESA)

Our magnetic field has always been in flux, and over the past few years it’s become clear that the invisible bubble that protects our planet from the harsh conditions of outer space has been getting weaker and weaker.

The research could help us finally understand why our planet’s magnetic field is weakening overall. How that’s going to affect us in future?

Because a pole flip probably won’t be a big deal, according to scientists. But it’s nice to make sure – if our magnetic sphere is about to go the way of Mars’s. That’s something we need to know about.