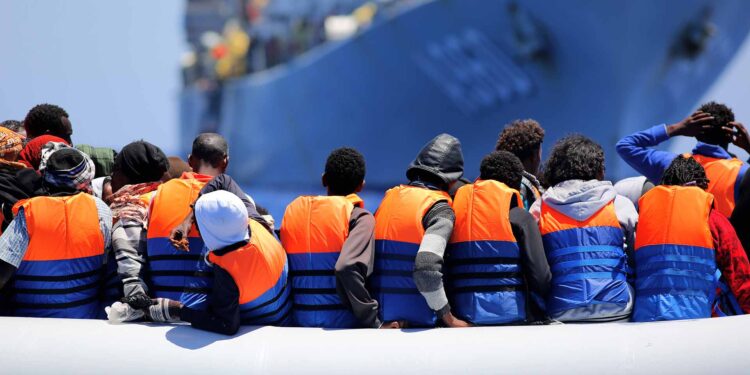 They embark on long, dangerous journeys departing from North Africa to cross the Mediterranean sea and reach Europe. Many of the migrants transit through Libya on their journey towards Europe. This has contributed to the development of smuggling and trafficking networks in Libya. As a result of EU action to address the migration situation, the Central Mediterranean route has seen a major fall in irregular arrivals from Libya since 2017. However, in 2020 a significant increase of departures from Algeria has been observed.

The European Border and Coast Guard Agency (Frontex) currently deploys three operations in the Mediterranean to rescue those migrants at risk and fight migrant smuggling. Over 538 900 lives have been saved since 2016 thanks to these efforts. The EU set up the European migrants smuggling centre in 2016 to help member states crack down on migrant smuggling. It is also cooperating with migrants’ countries of origin and transit to dismantle criminal networks.

Saving lives at sea of the Mediterranean routes

EU operational patrols in the Mediterranean routes are aimed at:

Over 538 900 people have been rescued in the Mediterranean routes since 2016 thanks to these operations.

There are three Frontex operations in the Mediterranean routes:

In March 2020, the EU launched the military operation Irini which also contributes to the disruption of the business model of human smuggling and trafficking networks through information gathering and patrolling by planes. Previously, between May 2015 and March 2020, the military Operation Sophia targeted migrant smugglers in the Mediterranean routes.

The EU also has an ongoing civilian mission in Niger (EUCAP SAHEL Niger) to assist the Nigerien authorities in developing the procedures and techniques to better control and address irregular migration.

Operation Themis launched in February 2018 and replaces Operation Triton. This launched in 2014. This operation supports Italy with border surveillance in the Central Mediterranean routes. It also aims to prevent foreign terrorist fighters from entering the EU. Search and rescue continues to be a key component of the operation.

Operation Poseidon has been covering the eastern Mediterranean routes since 2006. This operation focuses on border surveillance along the Greek sea borders with Turkey.

Operation Indalo covers all activities in the Western Mediterranean route between Morocco and Spain. The officers, vessels and other surveillance assets deployed by Frontex in the operation assist the national authorities with border surveillance, search and rescue.

The Council launched the military operation Irini in March 2020. This operation aims to contribute to the disruption of the business model of human smuggling and trafficking networks through information gathering and patrolling by planes in the Mediterranean routes.

The predecessor of Operation Irini is Operation Sophia. This deployed from May 2015 to March 2020. During this period, the operation resulted in:

This operation permanently ceased its activities at the end of March 2020.

The EUCAP Sahel Niger is a civilian mission launched in 2012. It will help Nigerien authorities strengthen their security capabilities.

Niger is facing security threats including terrorism, illegal trafficking of drugs, weapons and people, in particular in Northern Agadez, and is also a major regional transit hub for irregular migration.

In July 2016, the Council adapted the mission’s mandate to assist the Nigerien authorities in developing policies, techniques and procedures to better control and fight irregular migration and combat associated crimes. This adaptation follows the establishment of a permanent presence in the desert region of Agadez, in central Niger.

The fight against migrant smugglers in Mediterranean routes

Migrant smuggling has developed significantly since the migration crisis unfolded in 2015. Over 90% of migrants paid smugglers to try to reach Europe, according to Europol and Interpol. This is a highly lucrative business for criminal networks with a low risk of getting caught. It is estimated that migrant smuggling generated €3-6 billion turnover in 2015 globally. Over €200 million in 2019 in the maritime routes are leading to the European Union.

The EU has taken decisive actions to target criminal networks which exploit vulnerable migrants. As part of the EU policy cycle to tackle organised and serious international crime, the European Multidisciplinary Platform Against Criminal Threats (EMPACT) identified the fight against the facilitation of irregular immigration as one of the priorities for the period 2018-2021.

The coordinated action of member states led to 2 601 arrests, the dismantling of 86 organised crime groups and the seizure of:

The EU and its member states also work closely with migrants’ countries of origin and transit to tackle smuggling networks. EU has the diplomacy to get it even with no negotiation. to tackle the networks engaged in migrant smuggling through common operational partnerships.