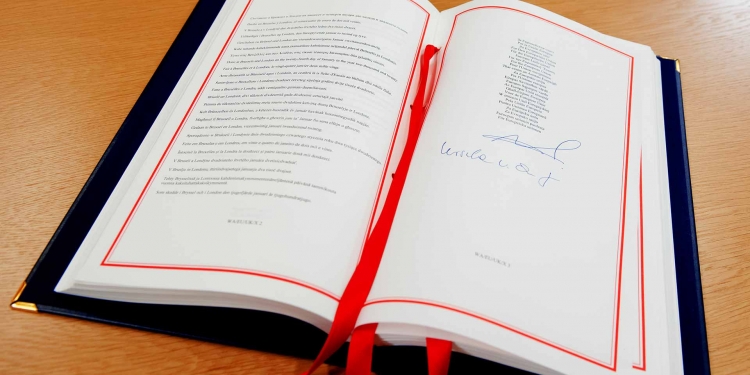 The Withdrawal Agreement was ratified by both the EU and the UK. It entered into force on 1 February 2020 and has legal effects under international law.

We had invited our British friends to remove the problematic parts of their draft internal market bill, by the end of September.
Ursula von der Leyen

The UK has until the end of this month to submit its observations to the letter of formal notice. After examining these observations, or if no observations have been submitted, the Commission may, if appropriate, decide to issue a Reasoned Opinion.

Article 5 of the Withdrawal Agreement

On 9 September 2020, the UK government tabled a Bill (‘United Kingdom Internal Market Bill’) that, if adopted, would flagrantly violate the Protocol on Ireland / Northern Ireland, as it would allow the UK authorities to disregard the legal effect of the Protocol’s substantive provisions under the Withdrawal Agreement. Representatives of the UK government have acknowledged this violation, stating that its purpose was to allow it to depart in a permanent way from the obligations stemming from the Protocol. The UK government has failed to withdraw the contentious parts of the Bill, despite requests by the European Union.

Obligation to act in Good Faith

Following the publication by the UK government of the draft ‘United Kingdom Internal Market Bill’ on 9 September 2020, Vice-President Maroš Šefčovič called for an extraordinary meeting of the EU-UK Joint Committee to request the UK government to elaborate on its intentions and to respond to the EU’s serious concerns. The meeting took place in London on 10 September between Michael Gove, Chancellor of the Duchy of Lancaster, and Vice-President Maroš Šefčovič.

EU’s Sefcovic: UK position on Brexit far apart from what EU can accept at a Withdrawal Agreement

At the meeting, Vice-President Maroš Šefčovič stated that if the Bill were to be adopted, it would constitute an extremely serious violation of the Withdrawal Agreement and of international law. He called on the UK government to withdraw these measures from the draft Bill in the shortest time possible and in any case by the end of the month of September.

At the third ordinary meeting of the Joint Committee on 28 September 2020, Vice-President Maroš Šefčovič again called on the UK government to withdraw the contentious measures from the bill. The UK government on this occasion confirmed its intention to go ahead with the draft legislation.

The Brexit Withdrawal Agreement provides that during the transition period, the Court of Justice of the European Union has jurisdiction and the Commission has the powers conferred upon it by Union law in relation to the United Kingdom, also as regards the interpretation and application of that Agreement.