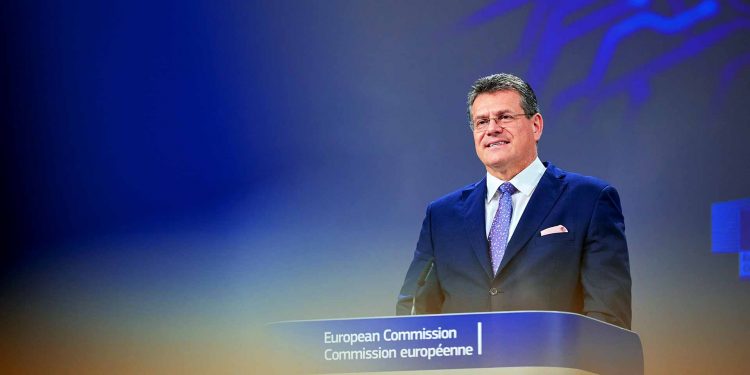 Vice-President Maroš Šefčovič, EU Co-Chair of the Withdrawal Agreement Joint Committee, held an informal meeting in Brussels with Lord David Frost on Northern Ireland crisis. The meeting took place in a constructive, solution-driven atmosphere. It forms part of the EU’s overall intense efforts to find joint solutions to ensure that the Protocol on Ireland / Northern Ireland is fully implemented for the benefit of everyone in Northern Ireland, while upholding the integrity of the EU’s Single Market.

The two sides used the occasion to take stock of all outstanding issues regarding the implementation of the Protocol. Both teams were given a political steer for the technical-level discussions that should further intensify over the coming weeks.

The Vice-President reiterated the EU’s commitment to the Protocol, which is the only way to protect the Good Friday (Belfast) Agreement and to preserve peace and stability, while avoiding a hard border on the island of Ireland and maintaining the integrity of the EU Single Market. He also reiterated the EU’s commitment to the PEACE+ programme, aimed at promoting reconciliation in Northern Ireland and the Border Region of Ireland, building prosperity and contributing positively to the economy.

Recalling the productive discussions between the Co-Chairs of the Specialised Committee on the Protocol on Ireland / Northern Ireland and good technical cooperation on the ground, the Vice-President stated clearly that the implementation of the Protocol is a joint endeavour, which leaves no space for unilateral action. Only joint solutions, agreed in the joint bodies established by the Withdrawal Agreement, can provide the stability and predictability that is needed in Northern Ireland.

The Vice-President insisted on mutually agreed paths towards full compliance with the Protocol, which includes clear end-points, deadlines, milestones and the means to measure progress. He stressed that, in this context, the continuation of an open-book approach is instrumental.

To facilitate this process, the Vice-President reiterated his priority to engage, jointly with the UK, with businesses and other stakeholders in Northern Ireland. Another round of outreach will be organised by both teams within the next fortnight.

The Vice-President stated that the Commission’s ongoing legal actions against the UK for breaching the substantive provisions of the Protocol, as well as the good faith obligation under the Withdrawal Agreement, will be continued as long as necessary.