Can the EU still trust the UK on a future Brexit Deal? 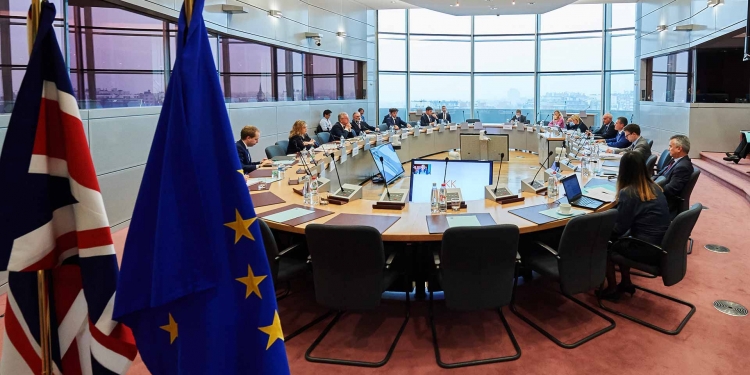 The EU is fully committed on a Brexit Deal of trust to achieving a full, timely and effective implementation of the Withdrawal Agreement. Brexit talks have just concluded the third meeting of the EU-UK Joint Committee. EU-UK work on the implementation and application of the Withdrawal Agreement. But can EU-UK have a Brexit deal under a seriously damaged trust?

The European Union has backed away from a threat to suspend trade and security talks over government legislation that breaches the Brexit withdrawal treaty. The EU has warned the UK that trade talks are in danger of collapsing. We will have a Brexit Chaos unless the UK withdraws its proposed law by the end of October 2020. Brexit talks have been blocked for months with the issues of Northern Ireland, fishing rights, and open – fair market competition.

The European Commission has said the UK has “seriously damaged trust”.

The EU has definitely declared that is ready for a Brexit deal with the UK. Joint Committee meeting has shown the urgent need to move into higher gear and therefore. The next Joint Committee by mid-October should take stock of the results achieved by the Specialised Committees.

Maros Sefcovic, the European Commission Vice-President, held talks with Michael Gove. This third meeting of the EU-UK Joint Committee took place in Brussels. That was just 48 hours before an EU deadline for the government to withdraw elements of the Internal Market Bill.

Commissioner Maros Sefcovic, who represents the Commission in the joint committee, reiterated that if the British government’s Brexit plan were to pass, “it would constitute an extremely serious violation of the Withdrawal Agreement and of international law.”

Our main message was on the much-needed acceleration of the implementation work to prepare for the 1st January 2021
Maroš Šefčovič, Vice-President

On citizens’ rights, the EU and the Member States continue to take steps to ensure the rights under the Withdrawal Agreement of around 4.5 million EU citizens and UK nationals. Some Member States have already introduced – due to the pandemic – a more flexible Brexit approach. In particular, prolongation of the grace period beyond June 2021 in Member States with a constitutive system or prolongation of validity of residence documents issued under the EU free movement directive. “We cannot have two classes of beneficiaries of the Withdrawal Agreement,” VP Sefcovic said.

Moving to the Protocol on Ireland/Northern Ireland, the window of opportunity to put in place the operational measures needed for it to function is rapidly closing. The EU does not accept the British argument that these surprise changes will protect the Good Friday agreement that ended the conflict in Northern Ireland.

Maros Sefcovic mentioned once more the urgent need for the UK to accelerate its work on all aspects of the Protocol and in particular with regard to sanitary and phytosanitary controls; customs-related IT systems; and the registration of Northern Irish traders for Value Added Tax purposes.

The necessary checks and controls will take place on goods entering Northern Ireland from the rest of the UK. This includes for example, Border Inspection Posts to ensure that the necessary sanitary and phyto-sanitary (“SPS”) controls are carried out.

UK authorities will implement and apply the provisions of Union law that the Protocol makes applicable in the UK in respect of Northern Ireland. Therefore, all checks by UK authorities will be with the appropriate supervisory and enforcement mechanisms for the EU.

On September 30 ends the EU deadline for the government to withdraw elements of the Internal Market Bill. The European Commission vice-president repeated EU’s request to withdraw the contentious parts of the draft Internal Market Bill. The Bill, if adopted in its current form, would constitute an extremely serious violation of the Protocol, as an essential part of the Withdrawal Agreement, and of international law.

The Withdrawal Agreement is to be implemented, not to be renegotiated – let alone unilaterally changed, disregarded or disapplied.

What is the Brexit ‘no-deal’ WTO option?

If there is no trade deal by the end of the year, the EU-UK trade relations will automatically fall back on World Trade Organization (WTO) rules.

The future EU-UK economic relationship should be ideal a model based on a Free Trade Agreement (FTA). The joint Political Declaration had confirmed the ambition to conclude an FTA with zero tariffs and quotas between the EU and the UK, and states that robust commitments on a level playing field should ensure open and fair competition. The policy prevents to maintain lower prices for consumers. This will keep the cost of living unchanged as far as possible for everyday families.

Has the Brexit backstop been removed? Does it still exist?

The revised Protocol is no longer an insurance policy that applies unless and until the EU and the UK conclude a subsequent Brexit agreement that replaces it in part or in full. It is a fully legally operative solution that will continue to apply unless it fails to receive the democratic support of the Northern Ireland Assembly.

The Assembly will be asked to provide its continued support for the Protocol 4 years after the end of the transition period and every [4] years thereafter. Obviously, the terms of the future Brexit trading relationship between the EU and the UK – in terms of our shared ambition to have zero customs duties and quotas between the EU and the UK – will have a bearing on the practical application of the newly agreed Protocol.

Finally the Joint Committee discussed the Sovereign Base Areas in Cyprus and Gibraltar.

Can EU-UK have a Brexit deal under a seriously damaged trust?