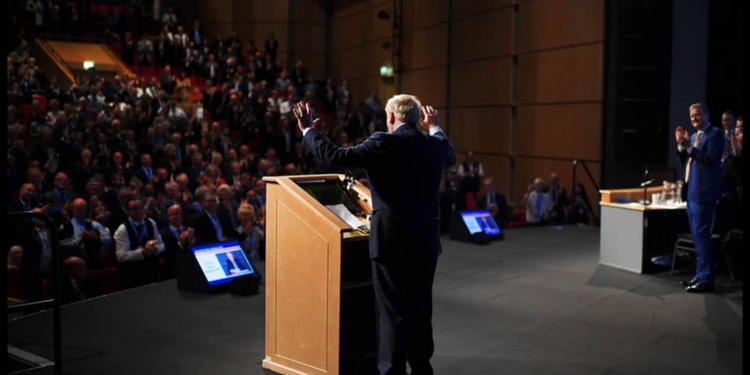 Conservative Party Conference is Johnson’s last crucial gathering in Manchester. He declares that it is once again incumbent on the Conservative Party – drawing on the well of our deep experience and proud history – to carry the beacon of leadership at every level across our country.

Conservative Party is the oldest and most successful political force in the world: I have every confidence we will deliver Brexit by October 31st, unite the country and defeat Jeremy Corbyn.
Prime Minister Boris Johnson

He mentioned: We are leaving the European Union by October 31st come what may. This is absolutely crucial in order to renew and restore trust in our precious democracy. The British people have had enough of waiting; the constant message I hear from the public is that they are tired of delay. By getting on with the job we will unite and re-energise our great United Kingdom. I would much prefer the UK to leave the EU with a deal, and the Government I lead is working flat out to do its part to make that happen. We have also stepped up preparations and will be fully prepared to leave without an agreement.

Boris Johnson promises investments in the NHS, schools and police.

Let’s. Get. Brexit. Done.
So we can invest in the NHS, schools and police.

And build a fantastic future for this country.