Tusk reaction to May’s letter for a short BREXIT delay 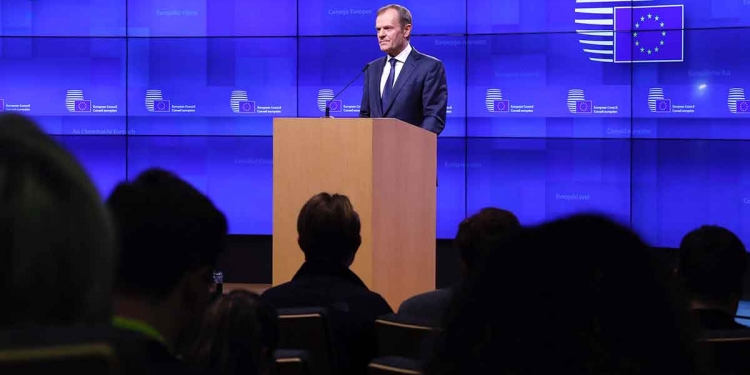 The EU had already mentioned that United Kingdom would have to have a good excuse for asking for a BREXIT delay, that was due March 29, and that it will not renegotiate the Brexit deal.

This delay has been requested because the British parliament has rejected U.K. Prime Minister Theresa May’s twice.

In a short statement on Wednesday, Tusk responded:

We cannot give up seeking – until the very last moment – a positive solution! President Donald Tusk on Brexit

Today I received a letter from Prime Minister May, in which she addresses the European Council with two requests:

Just now I had a phone call with Prime Minister May about these proposals.
Even if the hope for a final success may seem frail, even illusory, and although Brexit fatigue is increasingly visible and justified, we cannot give up seeking – until the very last moment – a positive solution, of course without opening up the Withdrawal Agreement. We have reacted with patience and goodwill to numerous turns of events, and I am confident that, also now, we will not lack the same patience and goodwill, at this most critical point in this process. Thank you.

Brexit: May says high time MPs vote for her deal in No 10 statement

I am on your side Theresa May

Theresa May: Not prepared to delay Brexit further than June 30

Theresa May delivered a statement outside 10 Downing Street on Wednesday 20st, where she said it was high time MPs voted for her Brexit deal.
She started her statement by saying it was ‘of great personal regret’ that Britain is not leaving on March 29. She added that her deal was ‘the best deal negotiable’, and attacked MPs for failing to make a decision. ‘I am on your side’, she said, addressing the British people.