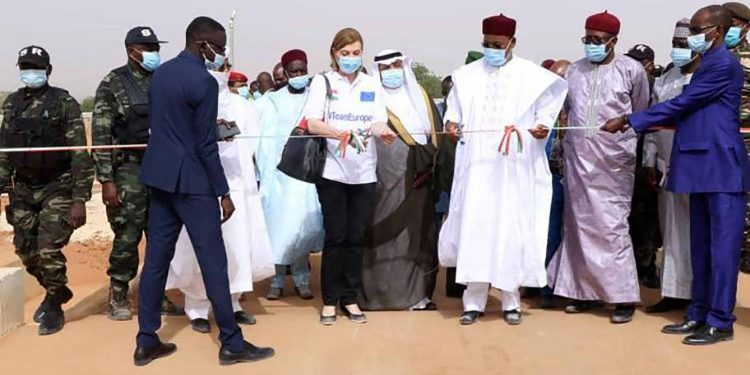 Supply of drinking water to more than 400,000 people, including first time access for 200,000 people, living in Niamey, capital of Niger. Niamey is one of the hottest and fastest growing cities in the world, will be secured following the successful completion of the Goudel IV water treatment plant and water distribution network expansion. The project was officially inaugurated by H.E. Mahamadou Issoufou, President of Niger, this morning.

More than 15,700 additional households have been connected to the water network and 170 new water access points built under the transformational project supported by European partners, the European Investment Bank, French Development Agency and the Dutch government.

The importance of new investment to provide drinking water in Niamey, increase water supply to match a growing urban population and better protect public health was highlighted at the inauguration of the Goudel IV water treatment plant attended by the Ambassador of the European Union in Niger.

“The Goudel 4 project to strengthen the drinking water supply in the city of Niamey will be inaugurated by the President of the Republic of Niger, Head of State, on March 18, 2021. The scheme will allow us to meet the water needs of an increasingly large and demanding population in the years ahead.” said Amadou Mamadou Sekou,  Directeur Général of the Société de Patrimoine des Eaux du Niger (SPEN).

“Team Europe is committed to tackling the impact of climate change in Africa and strengthening sustainable investment in Niger. The financial and technical cooperation of the European Investment Bank, French Development Agency and the Dutch government  with Société des Patrimoine des Eaux du Niger will improve public health and unlock economic opportunities for hundreds of thousands of people in Niamey for the future.” said Denisa-Elena Ionete, European Union Ambassador to Niger.

“Today marks a milestone in cooperation between Niger and European partners. The European Investment Bank is pleased to provide long-term financing and technical support for the Goudel IV plant and to secure supply of drinking water to thousands of people in Niamey as part of Team Europe. Construction and successful operation of the new clean water project will contribute to protecting public health and livelihoods during future droughts and floods.” said Ambroise Fayolle, European Investment Bank Vice President.

“France welcomes the commissioning of the Goudel IV drinking water treatment plant. Extending the supply of drinking water to Niamey will accelerate the achievement of the sustainable development goals in Niger, “said Alexandre Garcia, French Ambassador to Niger.

“Team Europe congratulates Niger and Société des Patrimoine des Eaux du Niger for the successful completion of the Goudel IV project that will scaling up access to drinking water for thousands of people in Niamey.” said Paul Tholen, Ambassador of the Netherlands in Niger.

Niger is one of the hottest countries on the planet, and average temperatures in Niamey are rarely below 32 °C.

Niamey has one of the fastest growing populations in the world and the new project will cater for increased demand for drinking water in the city.