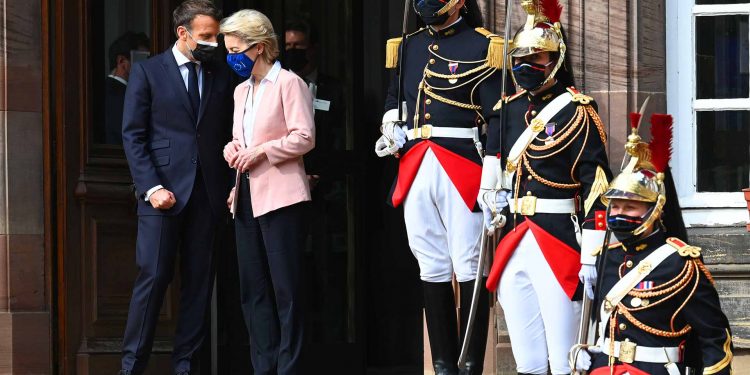 French President Emmanuel Macron host the Summit on Financing African Economies, which gathered African institutions and leaders, and their key international partners, including the heads of international and national financial institutions. The objective of this Summit is to plan joint and concrete actions that will help boost a strong and inclusive recovery in Africa.

Some 30 Heads of State and Government and leaders of international organizations are attending. This Summit follows on from the publication of an op-ed of 18 African and European leaders, published on 15 April 2020, to rally the international community’s support in addressing the consequences of the health and economic crisis that the pandemic has caused in Africa.

In 2020 Team Europe was launched to support partner countries in the fight against the coronavirus pandemic and its consequences. It brings together the expertise, analysis, networks and resources of the whole EU family – the European Commission, EU Member States, the European Investment Bank, and other European financial institutions.

In addition, several European leaders will take part in the summit, as well as representatives of G7 countries, the G20 and international institutions (the International Monetary Fund (IMF), the World Bank, the Organisation for Economic Cooperation and Development (OECD), the European Bank for Reconstruction and Development (EBRD)). Together, they will explore concrete actions and solutions to boost the African private sector, foster prosperity and accelerate the green and digital transition in line with the SDGs and the Paris Agreement on Climate Change.

European Commission President Ursula von der Leyen today announced a Team Europe initiative in support of Africa’s recovery from the COVID-19 pandemic, as she joined global leaders at the Summit on Financing African Economies hosted by French President Emmanuel Macron in Paris. Working with African Partners, the initiative will mobilise substantial financing and technical expertise from the European Union and its Member States, under a Team Europe approach, to address key bottlenecks that hold back young entrepreneurs and small business owners across Africa from starting or expanding their businesses.

President von der Leyen said: “Africa is our neighbour and close partner. We want to overcome this pandemic together. Europe can benefit a lot from Africa’s very young and dynamic economy. Our Team Europe initiatives therefore focus on boosting young entrepreneurship and supporting small businesses, which are the backbone of the African economy. And Europe will invest in more resilient African health systems and local vaccine production.”

A renewed commitment to partnership

On the occasion of the Summit on the financing of African economies held in Paris on the 18 May 2021, the European Union is committing to accelerate its financial efforts in favour of a sustainable and inclusive growth model led by Africa’s dynamic private sector.

The European Union is engaging in a coordinated response with African partners to address the short-term challenges posed by COVID-19: by accelerating the equitable access to vaccines, and in promoting a rapid recovery, while tackling key issues such as the preparation and financing of high-standard infrastructure, the scaling-up of micro, small and medium-sized companies and the improvement of Africa’s business environment. To meet this goal, the EU and its member states will mobilise significant concessional financing over the next years and will strive to continue forging ever tighter political and economic bonds with Africa, building on the synergies and opportunities that tie European and African institutions and private companies together.

The first is a set of commitments to address Africa’s financing needs as it works to achieve a prompt, green and sustainable recovery from the pandemic. The EU has pushed for an ambitious financing package and the President will welcome the agreement to significantly magnify the impact of the unprecedented new general Special Drawing Rights allocation by the International Monetary Fund, beyond the $33 billion that will go directly to Africa. The EU has also insisted on the need for a comprehensive package which includes concessional financing and debt relief and stresses the role of domestic resource mobilisation (the process through which countries raise and spend their own funds).

The declaration’s second pillar calls for more support for Africa’s long-term growth, driven by the development of a vibrant and young private sector and the financing of quality infrastructure. As recognised by Leaders, the European Union, its Member States and European development finance institutions, in a Team Europe approach, have led efforts to focus on micro, small and medium-sized companies.

The first of these Team Europe initiatives being announced today, called ‘Investing in Young Businesses in Africa’, will help micro, small and medium-sized companies across the continent take off and create jobs. It will do so by (1) increasing financial and technical support to small companies at pre-seed stage as well as to micro-companies; (2) supporting access to finance for start-ups at seed and early stages, and (3) supporting financial intermediaries, digital finance, the general entrepreneurial  ecosystem and the investment climate, including through the implementation of a commonly agreed upon set of reforms within the Compact with Africa framework.

A new, permanent coordination platform for investing in Young Businesses in Africa will bring together the Commission, EU Member States and development finance institutions, private investors and philanthropic organisations. Together they will share expertise, analyse gaps, consolidate existing tools and create new ones to offer more support to small businesses across Africa.

These engagements will complement the existing partnerships and joint-ventures between European and African companies which the EU looks forward to strengthening in order to consolidate industrial clusters and promote Africa’s economy moving up the value chain.

The European Union will also work with reform-minded countries in Africa to increase human capital, notably through improved health and education systems, and foster African regional integration which will lay a basis for Africa’s sustainable development on the long run.

The EU, its Member States and European development finance institutions, as Team Europe, are Africa’s top partners. Europe is by far the largest investor in Africa with a stock of €239 billion in Foreign Direct Investment in 2018. Together, Team Europe remains the largest provider of Official Development Assistance, having provided Africa with more than €20 billion in 2019 (€17 billion for the African private sector, as well as €5 billion for large infrastructure). Over the same time period, the European Fund for Sustainable Development is set to leverage more than €24 billion in private funds and European public development banks have jointly invested more than €30 billion on the African continent.

Over the next seven years, under the new EU financing instrument, “Global Europe” €29 billion is foreseen for Sub-Saharan Africa and €12.5 billion is set aside for our Southern Neighbourhood, of which a significant part will go to North Africa. Our collective financial firepower will further increase with that of our Member States through the new Team Europe Initiatives in Africa. Discussions are ongoing on the priorities that should constitute the backbone of national and regional interventions in Sub-Saharan Africa and North Africa with our African partners. Derisking private investment and sovereign lending in Africa will be an essential element of our collective efforts.