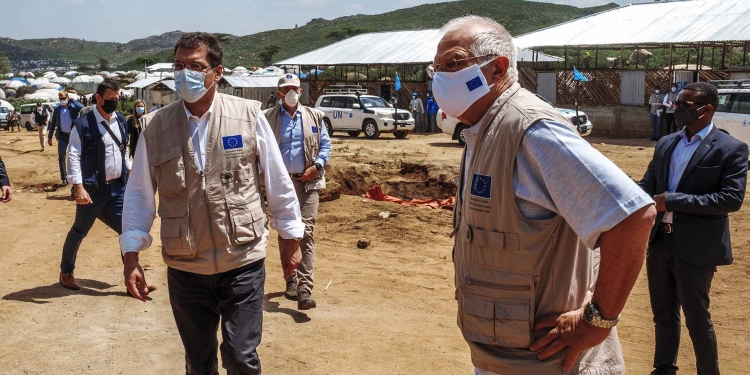 Reports of artillery strikes on civilians and mass killings of non-combatants in Ethiopia’s Tigray region, must be investigated and full access granted to independent investigators, UN rights chief Michelle Bachelet said on Tuesday.

The appeal by the High Commissioner for Human Rights follows seven weeks of conflict in northern Ethiopia between central Government soldiers and Tigray People’s Liberation Front (TPLF) forces. Tens of thousands have displaced due to the last Tigray conflict.

“Fighting is said to be continuing, particularly in some areas of north, central and southern Tigray”, Ms. Bachelet said in a statement. She highlighted the lack of overall humanitarian access and ongoing communications blackout in many areas. She raised concerns about civilians in Ethiopia.

Although the Government of Ethiopia had repeatedly alleged that the TPLF forces were involved in violations of international law, “without access it remains challenging to verify these allegations”, she added.

Ethiopia back to blood – ‘Hundreds dead’

Citing many alleged atrocities, the UN rights chief pointed to the alleged mass killing of several hundred people, mainly Amharans, in the western Tigray town of Mai Kadra, on 9 November.

“I urge the authorities to build on the Ethiopian Human Rights Commission’s preliminary findings into what happened in Mai Kadra”, she said, in reference to the panel’s report that a Tigrayan youth militia was responsible, supported by local security forces.

It is essential that there are investigations into allegations of human rights violations there against both Amharans and Tigrayans.

The High Commissioner also pointed to multiple reports that the Amhara “Fano” militia had committed human rights abuses, including killing civilians and looting. This comes in addition to unverified allegations that Eritrean troops were present in Tigray. They have been involved in the hostilities and serious violations of international law.

“While telephone lines are beginning to be restored in some areas, the communications blackout that began on 4 November and restrictions on access raise significant concerns that the human rights and humanitarian situation is even more dire than feared,” Ms. Bachelet said. “These reported allegations are likely only the tip of the iceberg regarding the extent and seriousness of the violations of international humanitarian law and international human rights law committed by all parties to the conflict.

Ms. Bachelet also echoed the concern expressed by UNHCR, the UN Refugee Agency, for the safety and wellbeing of some 96,000 Eritrean refugees registered in four camps in Tigray when fighting started.

Meanwhile, UNHCR on Tuesday launched an urgent appeal for $156 million to help 130,000 people affected by the ongoing violence in Tigray.

Since fighting flared up in Tigray, more than 54,500 refugees have fled the Tigray region into Sudan, spokesperson for UNHCR, Andrej Mahecic, said on Tuesday.

The number of new arrivals has dropped to around 500 a day but aid agencies have been confronted with a “full-scale humanitarian emergency in a very remote area that has not seen such a large refugee influx in decades”, he told journalists in Geneva.

“The Regional Refugee Preparedness and Response Plan for the Ethiopia Situation (Tigray) covers the period from November 2020 through to June 2021 and will reach up to 115,000 refugees and 22,000 people from host communities”, he said. “It aims to support the governments of Sudan, Djibouti and Eritrea in maintaining and facilitating access to asylum and providing life-saving assistance to those who have been forced to flee.”

Mr. Mahecic explained that the requested funds are needed by 30 agencies in total to help Ethiopian refugees in the first half of next year. Funding will be used to register new refugees and transfer refugees to new settlements away from crowded border areas.

Other priorities include providing food, health and education services, with dedicated support for groups with specific needs, such as women and girls at risk, unaccompanied minors, people with disabilities and the elderly.

The main goal of the new EU Global Human Rights Sanctions Regime is to enable the EU to stand up in a more tangible and direct way for human rights, one of the fundamental values of the EU and its foreign policy. Respect for human dignity, freedom, democracy, equality, the rule of law and human rights underpin the EU’s external action. Acts such as genocide, crimes against humanity, torture, slavery, sexual and gender-based violence, enforced disappearances, or human trafficking are unacceptable. Putting an end to these violations and abuses worldwide is a key priority for the EU.

To address the urgent humanitarian crisis linked to the conflict in the Tigray region of Ethiopia, the EU has today increased humanitarian funding for the area by €23.7 million. Tigray is on the edge of a humanitarian catastrophe which risks destabilizing the whole neighbourhood. This new crisis comes on top of an already complex humanitarian situation, significantly exacerbated by the Covid-19 pandemic.

Commissioner for Crisis Management, Janez Lenarčič said: “European solidarity with those in need in Ethiopia continues, despite the pandemic and any political considerations in Ethiopia. We will not let the people of East Africa down in these difficult times. During my recent visit to the region, I urged the Ethiopian government to grant unconditional, unimpeded and immediate access to all people in need in Tigray. Unfortunately, this has not happened yet. The EU continues to call on all involved to abide by International Humanitarian Law. In spite of this, the EU is stepping up its humanitarian support for the region, including for Sudan, which is suffering the brunt of the refugee wave from Tigray.”

Ethiopia is in the centre of the Horn of Africa region. Ethiopia is the destination point for thousands of refugees as well as a country of transit and a source of, migrants seeking opportunities beyond its borders.

Humanitarian partners working in Ethiopia will receive an extra €18.8 million and €2 million will go to Sudan to help with the influx of refugees from Tigray. In addition, €2.9 million will be available to address the fast deteriorating food security situation of refugees in Kenya.

EU supports Ethiopia in addressing the long-term development and protection needs of refugees and their host communities, as well as in tackling root causes of instability and internally forced displacement from Tigray region.

On 2-4 December 2020, Commissioner Lenarčič, visited the border areas in Sudan and the capital Khartoum and re-emphasised EU humanitarian support. He also underlined the EU’s continued commitment to supporting Sudan’s political transition. He also stopped in the Ethiopian capital Addis Ababa and met with Ethiopian authorities, calling for protection of humanitarian aid workers, civilians and immediate, unconditional and unrestricted access for humanitarian workers.

There are 6 million people living in Tigray, including over 3 million people who were in need of external assistance prior to the current crisis. This includes 106,000 Eritrean refugees who are reportedly at risk of violence, forced recruitment into Eritrean forces and forceful returns to Eritrea. Prior to the Tigray crisis, close to 19 million people were in need of food assistance in Ethiopia, taking into account the most vulnerable population, including the high number of Internally Displaced Persons, Refugees, and people affected by climatic shocks and the desert locust upsurge.

How likely is a full-scale war?