EU and China reach agreement in principle on investment 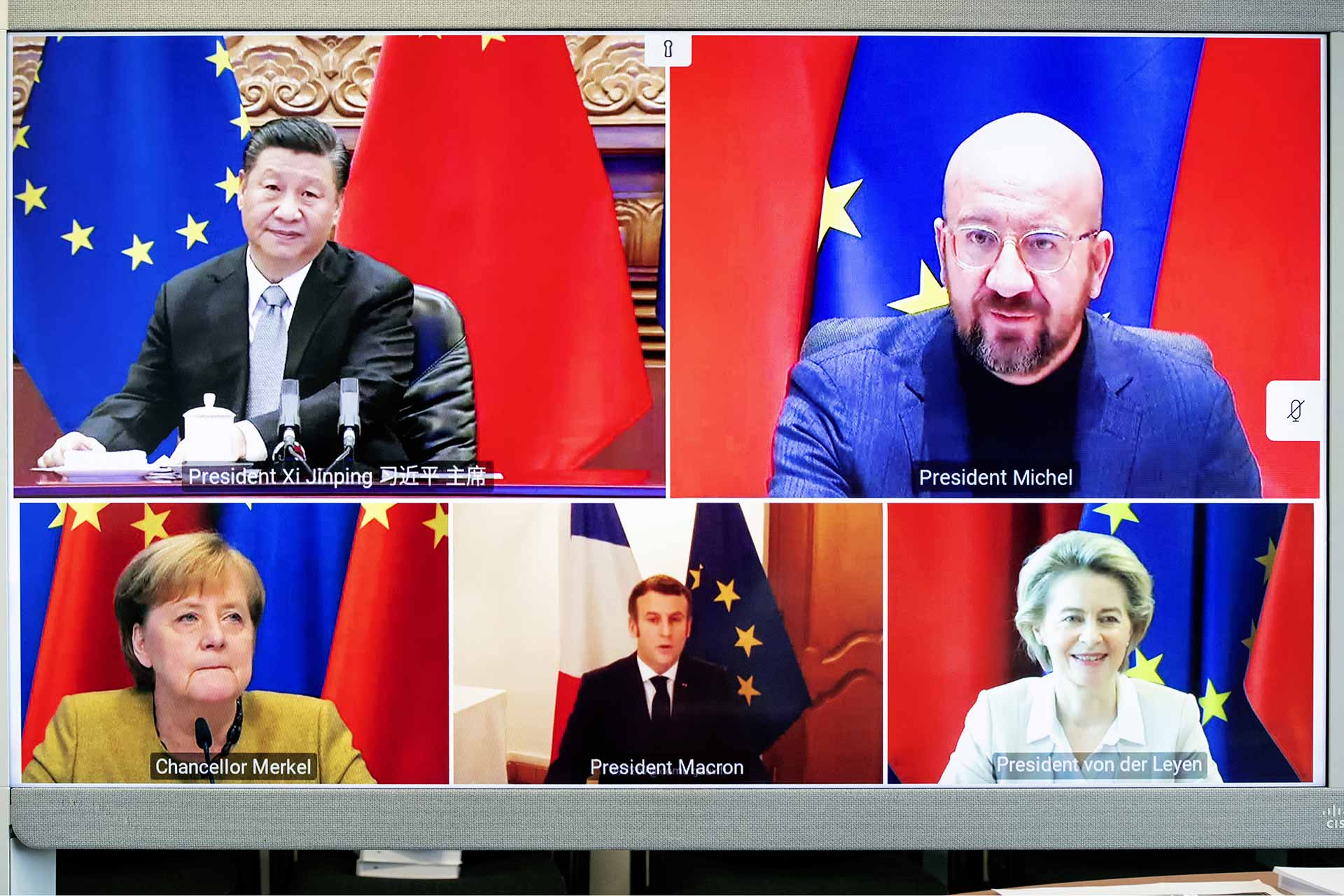 The EU and China have concluded in principle the negotiations for a Comprehensive Agreement on Investment (CAI). This deal follows a call between Chinese President Xi Jinping and European Commission President von der Leyen, European Council President Charles Michel and German Chancellor Angela Merkel on behalf of the Presidency of the EU Council, as well as French President Emmanuel Macron.

China has committed to a greater level of market access for EU investors than ever before, including some new important market openings. China is also making commitments to ensure fair treatment for EU companies so they can compete on a better level playing field in China, including in terms of disciplines for state owned enterprises, transparency of subsidies and rules against the forced transfer of technologies. For the first time, China has also agreed to ambitious provisions on sustainable development, including commitments on forced labour and the ratification of the relevant ILO fundamental Conventions.

The Agreement on investment will create a better balance in the EU-China trade relationship. The EU has traditionally been much more open than China to foreign investment. This is true as regards foreign investment in general. China now commits to open up to the EU in a number of key sectors.

President of the European Commission, Ursula von der Leyen said: “Today‘s agreement is an important landmark in our relationship with China and for our values-based trade agenda. It will provide unprecedented access to the Chinese market for European investors, enabling our businesses to grow and create jobs. It will also commit China to ambitious principles on sustainability, transparency and non-discrimination. The agreement will rebalance our economic relationship with China”.

The rules negotiated in this Agreement on investment set a high benchmark in terms of transparency, level playing field, market access commitments and sustainable development. The EU’s work on planned autonomous measures in areas such as subsidies or due diligence will continue as a matter of priority.

Today’s conclusion in principle of the negotiations is a first step in the process; deliberations for the adoption and ratification of the agreement are yet to take place and will be conducted in full transparency.

During today’s call, the leaders also addressed climate change, the COVID-19 pandemic, Hong Kong and human rights. They took stock of the overall EU-China agenda, recording important progress on a number of key issues, while serving to underline the EU’s continued expectations and concerns in other areas. The EU also raised the negotiations for the Strategic Agenda for Cooperation 2025, and proposed that negotiators from both sides should resume their work now that significant progress has been made in the CAI negotiations. The EU side recalled its invitation for President Xi to join an EU-China Leaders’ meeting with the participation of the Heads of State and Government of the EU member states to be held in Brussels in 2021.

Executive Vice-President and Commissioner for Trade, Valdis Dombrovskis, said: “This deal will give European businesses a major boost in one of the world’s biggest and fastest growing markets, helping them to operate and compete in China. It also anchors our values-based trade agenda with one of our largest trading partners. We have secured binding commitments on the environment, climate change and combatting forced labour. We will engage closely with China to ensure that all commitments are honoured fully.”

In terms of market access for EU businesses, China has made significant commitments on manufacturing, the most important sector for EU investment in China. Manufacturing makes up more than half of total EU investment – including 28% for the automotive sector and 22% for basic materials. This includes production of electric cars, chemicals, telecoms equipment and health equipment, among others.

In the sectors covered, European business will gain certainty and predictability for their operations as China will no longer be able to prohibit access or introduce new discriminatory practices.

The CAI will help to level the playing field for EU investors by laying down very clear rules on Chinese state-owned enterprises, transparency of subsidies, and prohibiting forced technology transfers and other distortive practices.

The CAI will bind the parties into a values-based investment relationship underpinned by sustainable development principles. This is the first time that China agrees to such ambitious provisions with a trade partner. Amongst others, China is undertaking commitments in the areas of labour and environment such as not to lower the standards of protection in order to attract investment, to respect its international obligations, as well as to promote responsible business conduct by its companies. China has also agreed to effectively implement the Paris Agreement on climate change as well as to effectively implement the International Labour Organisation Conventions (ILO) it has ratified. China has also agreed to make continued and sustained efforts to ratify the ILO fundamental Conventions on forced labour.

Sustainable development matters will be subject to a solid enforcement mechanism by an independent panel of experts as in our other trade agreements. This means a transparent resolution of disagreements with the involvement of civil society.

The implementation of the commitments in the Agreement will be monitored at the level of Executive Vice President on the side of the EU and Vice Premier on China’s side. The State-to-State dispute resolution mechanism underpinning the agreement meets the highest standards found in existing EU trade agreements. The Agreement on investment also creates a specific working group to follow the implementation of sustainable development related matters, including on labour and climate.

Continuation of negotiations on investment protection

The package deal reached today includes a commitment by both sides to try to complete negotiations on investment protection and investment dispute settlement within 2 years of the signature of the CAI. The common objective is to work towards modernised protection standards and a dispute settlement that takes into account the work undertaken in the context of UNCITRAL on a Multilateral Investment Court. The EU’s objective remains to modernise and replace the existing Member States’ Bilateral Investment Treaties with China.

Both sides are now working towards finalising the text of the agreement, which will need to be legally reviewed and translated before it can be submitted for approval by the EU Council and the European Parliament.

What are the benefits of the CAI for the EU?

What has the EU committed to in the CAI?

What about negotiating a trade agreement between the EU and China?

How will the CAI address the issue of forced technology transfers?

What did you achieve on State-Owned Enterprises (SOEs)?

What are the rules on subsidies in the CAI and how does this relate to the WTO?