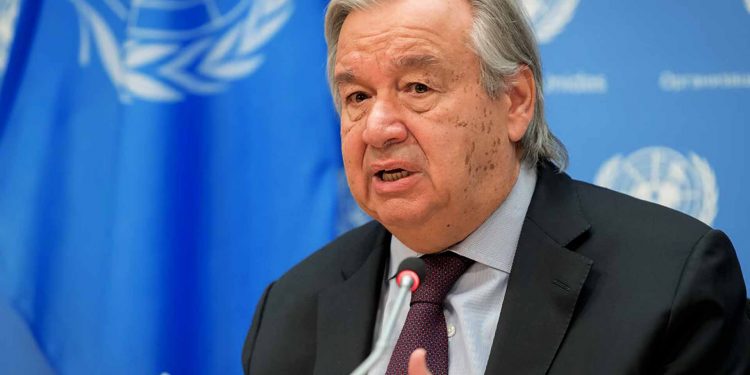 UN Secretary-General António Guterres and EU HRVP Josep Borrell have condemned the lethal use of force against peaceful protesters in Myanmar. Demonstrations against the military takeover of the Government have been growing. At least two people were killed on Saturday in protests in Mandalay, the nation’s second largest city, according to media reports.

“The use of lethal force, intimidation & harassment against peaceful demonstrators is unacceptable. Everyone has a right to peaceful assembly. I call on all parties to respect election results and return to civilian rule.”

Mass protests have grown steadily across Myanmar since the military takeover on 1 February,  following escalating tensions surrounding elections held in November, which were won by the  National League for Democracy (NLD).  Top party members were arrested, including leader Aung San Suu Kyi.

Crowds gathered in Myanmar’s capital, Nay Pyi Taw, on Sunday for the funeral of a young woman confirmed as the first person to be killed in the protests.  Mya Thwet Thwet Khine, 19, died on Friday, after being shot in the head at a demonstration on 9 February.

Tom Andrews, the UN Special Rapporteur on the situation of human rights in Myanmar, lamented her death in a post on Twitter on Friday.

“Sadness & anger is how I reacted to news that Mya Thwe Thwe Khaing died of wounds inflicted by police in a callous & cowardly act as she protested the coup in Myanmar. I, and many others, mourn the loss of a courageous young woman & extend heartfelt condolences to her family,” he wrote.

‘Madness’ must end with protesters in Myanmar

On Saturday, two people were killed in Mandalay when security forces opened fire on striking shipyard workers.  Mr. Andrews was “horrified at more loss of life”, noting that a teenage boy was one of the victims. “From water cannons to rubber bullets to tear gas and now hardened troops firing point blank at peaceful protesters in Myanmar. This madness must end, now!” he said in a tweet on Saturday.

Earlier that day he posted: “The 33rd Light Infantry Division was reportedly involved in the lethal attacks in Mandalay today – the same division responsible for mass atrocity crimes against the Rohingya in 2017. A dangerous escalation by the junta in what appears to be a war against the people of Myanmar.”

Special Rapporteurs like Mr. Andrews are not UN staff nor are they paid by the Organization.  They are appointed by the UN Human Rights Council to monitor and advise on specific country situations or thematic issues.

The EU High Representative for Foreign Affairs and Security Policy/Vice-President of the European Commission, Josep Borrell, spoke with the Minister of Foreign Affairs of Brunei Darussalam, Dato Erywan Yusof. Brunei Darussalam is the Chair of the Association of Southeast Asian Nations (ASEAN) for 2021. Their discussions focussed on the recent coup by the Myanmar military, which overthrew the legitimately-elected civilian government, turning back 10 years of democratic transition. High Representative/Vice-President Borrell reiterated the EU’s expectation that the military release all those who have been arbitrarily detained, respect the fundamental rights of the Myanmar people, and refrain from violence.

Do not use violence & force against demonstrators

The High Representative/Vice-President stressed his support for the efforts of the United Nations Special Envoy on Myanmar, Christine Schraner Burgener, in trying to gain full access and to establish dialogue on the ground. The High Representative/Vice-President encouraged ASEAN in its efforts to establish dialogue and to find a way forward. He emphasized the European Union’s readiness to support.

High Representative/Vice-President Borrell briefed Foreign Minister Yusof on the options that the European Union is considering, including as regards possible new restrictive measures. EU Foreign Ministers will meet to discuss the situation and the way forward at the upcoming Foreign Affairs Council on 22 February.

I strongly condemn the coup by the Tatmadaw in Myanmar. This is a clear violation of the country’s constitution and an attempt by the military to overturn the will of the Myanmar people and their strong attachment to democracy, as expressed in the November 2020 general election. President Win Myint, State Counsellor Aung San Suu Kyi, and all others who have been arrested must be immediately and unconditionally released. The European Union calls for the immediate restoration of the legitimate civilian government in Myanmar, and the swift opening of parliament with the participation of all elected representatives, as foreseen by the constitution.

Today’s actions by the Tatmadaw bring back painful memories of previous decades. Democracy must prevail. We are in touch with our international partners on this most pressing issue to ensure a coordinated response.