Can G7 leaders save the world and stop the next global crisis? 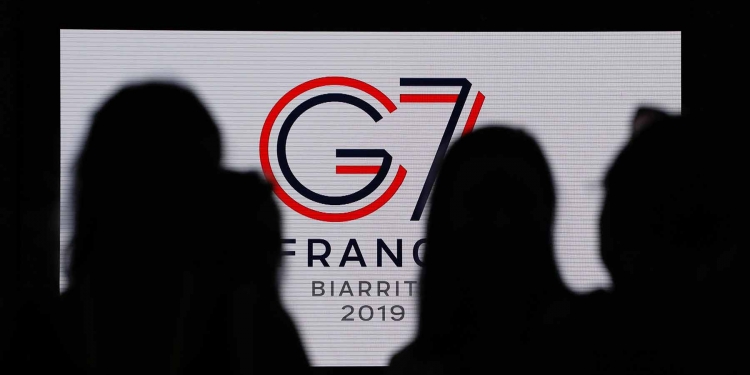 The G7 Leaders wish to underline their great unity and the positive spirit of the debates. The G7 Summit organized by France in Biarritz has successfully produced agreements by the Heads of State and Government themselves on several points summarized below:

The annual gathering, which brings together the seven most powerful countries in the world, could be a productive meeting in which critical issues such as global economic governance, international security and energy policy are addressed with harmonious cooperation. On the other hand there is the feeling that this year’s assembly includes too many saboteurs to stop the next global depression!

The G7 is committed to open and fair world trade and to the stability of the global economy. The G7 requests that the Finance Ministers closely monitor the state of the global economy. Therefore, the G7 wishes to overhaul the WTO to improve effectiveness with regard to intellectual property protection, to settle disputes more swiftly and to eliminate unfair trade practices. The G7 commits to reaching in 2020 an agreement to simplify regulatory barriers and modernize international taxation within the framework of the OECD.

– How to prepare for the next global recession

G7 fully share two objectives: to ensure that Iran never acquires nuclear weapons and to foster peace and stability in the region.

France and Germany will organize a Normandy format summit in the coming weeks to achieve tangible results.

G7 support a truce in Libya that will lead to a long-term ceasefire. G7 believe that only a political solution can ensure Libya’s stability and they call for a well-prepared international conference to bring together all the stakeholders and regional actors relevant to this conflict.

The G7 reaffirms the existence and importance of the Sino-British Joint Declaration of 1984 on Hong Kong and calls for violence to be avoided.

We fully share two objectives: to ensure that Iran never acquires nuclear weapons and to foster peace and stability in the region
G7 Leaders’ Declaration 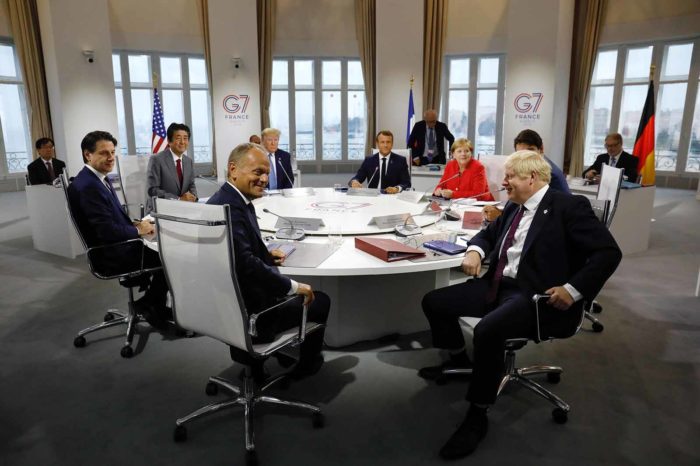 The summit took place under the French presidency of the G7, which is centred around the fight against inequalities. With that goal in mind, the French G7 presidency has adjusted the format of the G7 to involve international partners and representatives of civil society.

The EU’s priority during the summit was to defend the rules-based order and its organisations as the best approach to global governance.

Leaders discussed pressing foreign and security issues, such as:

Leaders also agreed to disburse €20m to finance aeroplanes to fight the wildfires in the Amazon rainforest recognising the global nature of the environmental catastrophe.

Leaders discussed the global economic outlook and issues related to trade tensions. They also talked about international taxation, especially on a coordinated approach to the issue of taxation in the digital sector.

Leaders exchanged views on how to safeguard the rules-based trading system and how to de-escalate current trade tensions. They also tasked the G7 finance ministers to closely monitor the state of the global economy.

The reform of the World Trade Organisation (WTO) was also on the agenda, following the commitment made at the G20 summit in Osaka to modernise the WTO.

G7 leaders endorsed a new framework between the G7 and Africa. They worked together to find ways of cooperating with African partners to develop tools to support sustainable economic development across the continent. The results of the talks are reflected in the Biarritz Declaration for a G7 and Africa Partnership.

In addition, a specific G7 action plan on the Sahel was endorsed to improve development and security cooperation.

The EU also announced financial support for the African Development Bank’s Affirmative Finance Action for Women in Africa (AFAWA) programme. The EU’s contribution of over €85 million will help develop 100 000 businesses run by women.

Fighting against inequalities and women’s empowerment

Leaders underlined the significance of women’s participation in the labour market, and highlighted the importance of education for girls and women, especially in developing countries. G7 partners have also committed to specific areas of action to achieve progress on gender equity.

As regards financial commitments, the EU announced a contribution of €550 million to the replenishment of the Global Fund to fight AIDS, Tuberculosis and Malaria. “This means that our overall involvement will exceed €1 billion,” said President Donald Tusk at the beginning of the summit.

The EU will also contribute an initial €1 million to the International Fund for Survivors of Conflict-Related Sexual Violence, which Nadia Murad and Doctor Denis Mukwege, winners of the 2018 Nobel Peace Prize, presented to G7 leaders during the summit in Biarritz.

On climate change, the EU and other G7 partners reaffirmed their commitment to the full and effective implementation of the Paris Agreement.

Leaders followed up on the G7 Ocean Plastics Charter agreed last year at their summit in Canada and discussed further initiatives to reduce plastic pollution.

G7 leaders also endorsed a charter on biodiversity, as adopted by the G7 environment ministers in May 2019. The charter aims to boost efforts to halt biodiversity loss and to sustain a healthy planet.

Leaders also discussed the digital transformation and how to ensure that it is open, free and secure. The discussion focused on ways to defend our democratic societies and institutions – and our electoral processes – from foreign threats.

Leaders exchanged views on how to continue the fight against terrorist content online. They also discussed international cooperation on artificial intelligence.

The EU as G7 member

In 1977, representatives of the then European Community began participating in the London summit. Originally, the role of the EU was limited to those areas in which it had exclusive competences, but this role has expanded over time.

The EU has gradually been included in all political discussions on the summit agenda and , from the Ottawa summit (1981) onwards, has taken part in all summit working sessions.

The EU has all the responsibilities of membership. The summit communiqué is politically binding on all G7 members.

The G7 summit is a forum that plays an important role in shaping global responses to global challenges, complementing the global economic coordination carried out by the G20.

It brings together leaders from the EU and the following countries:

G7 Summit brings together the seven most powerful countries.

Can they save us?

There is a feeling that this year’s assembly included too many saboteurs! Is populism reshaping our world?