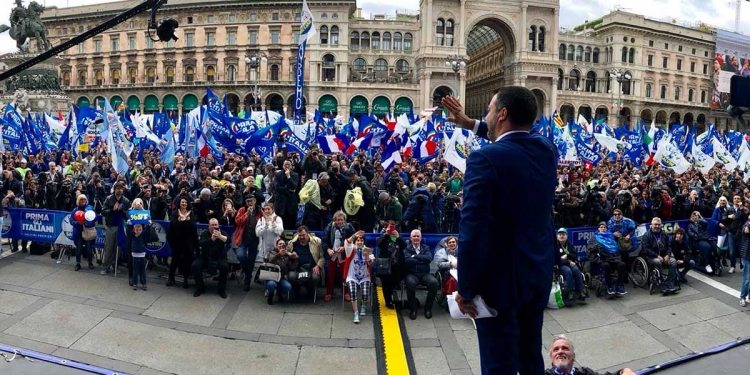 The main slogans were “Italy is our home” and “Free Italy”, as well as “Europe is Christian, not Muslim,”. Supporters were holding up also banners with slogans like “Close the ports” and “Italians first”.

Feminist activists had dressed statues across the city in pink and gold in protest against the gathering.

Salvini mentioned that “There are no extremists, racists, or fascists here,”. “The difference is between those who look ahead, who talk about future and jobs and those who put the past on trial: They are afraid of the past because they don’t have an idea for the future. We’re building the future.”

This is a “historic moment” for Marine Le Pen. As a member of the same the group with Matteo Salvini at Europe of Nations and Freedom in the European Parliament, Le Pen joined was a key figure in Milan.

Jorg Meuthen from Germany’s AfD declared with Matteo Salvini the ideas for a “Europe of Nations”.

-We are not anti-European as the mainstream always says. On the contrary, we are the true Europeans
Jorg Meuthen

-We are the patriots of Europe and we choose freedom. We have to stop Islamisation.
Geert Wilders

The greatest notable absense was Viktor Orban – the Hungarian leader whose party Fidesz has been suspended from the centre-right European People’s Party of Manfred Weber.

Anti-Muslim racism is increasingly becoming a prominent feature of far-right extremist groups and political figures across Europe. Far-right political parties in European societies are not a new phenomenon. As Golder notes, far-right parties have formed coalition governments in Finland, Austria, Italy, the Netherlands, Poland, Switzerland, as well as other European nations. However, the surge of popularity of far-right views, particularly within Western politics, over the past decade has brought about some cause for concern.

Far-right ideologies, particularly in the realm of politics, have increasingly been defined along the lines of radicalism, extremism, populism, and nationalism. Far-right and nationalist parties have made strides across Europe since the last European Parliament elections in 2014 and are now in power in Italy, Poland, Hungary and Austria.

The UK referendum to leave the European Union (EU), commonly referred to as ‘Brexit,’ was predominantly supported by far-right groups and politicians, and garnered almost fifty-two percent support amongst the UK population. It is important to note that Brexit was not solely caused by far-right groups and politicians. Rather, Brexit was symptomatic of racist attitudes already existent in British society that have been spurred on by both liberal and right-wing political figures. Political actors across the spectrum have for years promoted policies that facilitated “manufacturing the social and political conditions for this momentous decision.

While the UK has traditionally promoted a multiculturalist social cohesion model of integration, France has had a stronger assimilationist approach to the integration of immigrant populations. The Front National has long been perceived as a far-right political party with openly anti-immigration, anti-Semitic, and anti-Muslim views.

Founded in the 1970s and composed of neo-fascists and opponents of decolonization, it was perceived as a fringe party at its inception. However, in the 2017 French election, the Front National, led by Marine Le Pen, the daughter of party founder, Jean-Marie Le Pen, found herself in a runoff election against Emmanuel Macron, ultimately losing by a reasonable margin.

One of the most outspoken racist and Islamophobic European politicians is Geert Wilders, the founder and leader of the Party for Freedom (PVV) in the Netherlands. Wilders’ anti-Muslim hatred was most prominent in a short film that he produced called Fitna (2008), which explicitly linked texts from the Qur’an with violence and terrorism. Wilders was eventually charged with hate speech under Dutch law in 2009 for the film but was later acquitted. The media frenzy surrounding the trial served to bolster his reputation as a staunch defender of European values and culture in face of the tidal wave of Islamization confronting Europe. In the 2017 Dutch election, almost half of his one-page election manifesto was committed to the de-Islamization of the Netherlands.

Should Europe shut the door on immigration?
Did the refugee crisis increase euroscepticism?

Not long ago, a number of these political parties, such as the Front National and the PVV, were considered fringe political parties. However, they are now increasingly being viewed as legitimate parties contributing to and impacting the political landscape in their nations despite their draconian views which openly promote platforms that target and police Muslims in their societies.