Rewriting the Rules of the European Economy 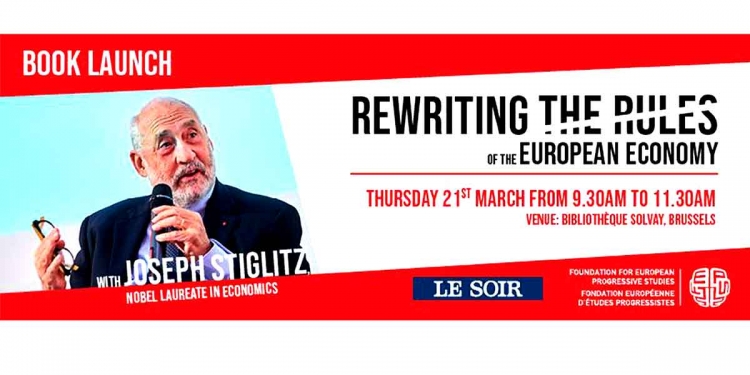 FEPS and Nobel Laureate Joseph Stiglitz agreed to work on the European twin publication to Professor Stiglitz’s bestseller “Rewriting the Rules of the American Economy”. In partnership with the Renner Institute and Policy Network, FEPS launched a reflection process with a group of high-level scholars and politicians from all over Europe with the aim of developing proposals for new rules after 10 years of economic, social and political crisis.

Rebalancing the EU’s trade policy will require an opening up of the negotiation and drafting procedures.

The ideas expressed during this process served as the basis for the final report that will be presented on March 21st. This report, authored by Joseph Stiglitz, will be published and disseminated as a book by W.W. Norton & Company, Independent Publishers, in the second half of 2019.

Europe should recognize that borders matter

Rewriting the Rules of the European Economyis a comprehensive assessment of what ails Europe and what can be done to restore steady, inclusive economic growth and revitalise the European Project.

Eliminating tax havens and destructive tax competition will not be politically easy, but the principles are simple and clear.

Written by Joseph Stiglitz and a team of high-level scholars and politicians from all over Europe, this bold plan tackles the doctrinaire market fundamentalism that has characterised much of European economic and social policy for the last quarter century. It explicitly rejects the doctrine of austerity that defined the European Union’s response to the 2008 financial crisis and recession in favor of supporting aggregate demand, pro-growth monetary policy, and public investment in the infrastructure and industries of the future.

Globalization was supposed to create jobs and to quicken and sustain economic growth. It has done neither reliably and has sometimes even done the opposite.