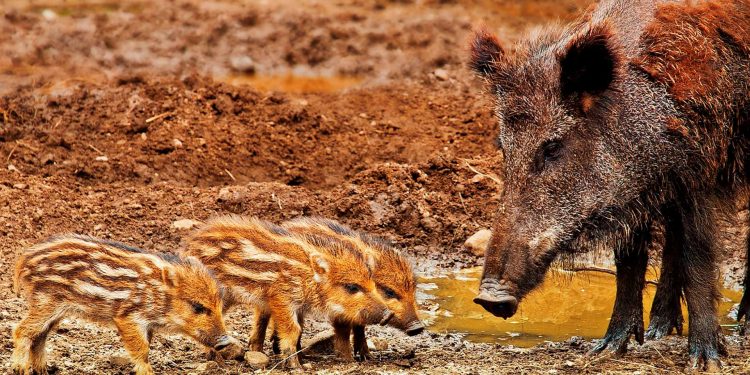 African swine fever (ASF) is an infectious lethal disease affecting domestic pigs and wild boar and in 2020 it has been reported in 10 European Countries.

EFSA has devised surveillance strategies that will help countries affected by African swine fever (ASF) to determine  when the virus has stopped circulating among their wild boar populations. The scientific opinion recommends an “exit strategy” comprising two phases. A period of routine surveillance of wild boar (the screening phase) followed by a shorter period of intense surveillance (the confirmation phase).

The opinion gives practical examples of how to apply the exit strategy to both large and small affected areas. It also makes recommendations on the minimum monitoring periods needed to make the strategy effective.

What is African swine fever?

African swine fever is a viral disease of pigs and wild boar that is usually deadly. There are neither vaccines nor cures. For this reason, it has serious socio-economic consequences in affected countries. Humans are not susceptible to the disease.

African swine fever (ASF) is a global highly contagious hemorrhagic disease of pigs, warthogs, European wild boar and American wild pigs. First detected in the early 1900s in Africa, the disease has spread to countries in Asia and Europe.

From the beginning of 2014 until now, genotype II of ASF has been notified in Belgium, Bulgaria, the Czech Republic, Estonia, Greece, Latvia, Lithuania, Poland, Romania and Slovakia causing very serious concerns. The disease has also been reported in Belarus, Moldova, Serbia, Russia and Ukraine. It creates a constant risk for all the Member States that share a border with these third countries. In Italy (Sardinia only) genotype I of ASFV has been present since 1978 in domestic pigs and wild boar.

Map of 2020 outbreaks of African swine fever in Europe

Can humans get African swine fever?

African swine fever does not affect humans. It is not a public-health threat or a food-safety concern.

African swine fever is a viral disease that can have serious production and economic consequences for the swine industry, including potential export bans on pigs and pork products from affected countries.

The disease is highly contagious and spreads quickly through herds. It can survive days on contacted surfaces like vehicles or equipment, for weeks in raw meat and months in frozen meat products. It has an incubation period of 5-21 days, and infected animals do not always show clinical signs of the virus.

No treatment or vaccine exists for African swine fever. It has proven difficult to control transmission of the disease. Often, movement restriction and herd depopulation are necessary control measures because of how quickly the virus spreads.

African Swine Fever: how to stay one step ahead

EFSA’s new practical guide on African swine fever: what it is and how to protect domestic pigs from infection. From causes and symptoms to precautionary measures, a list of best practices on how to protect farm animals and wild boar populations from ASF.

Outbreaks in the European Union

From Russia and Belarus, the disease spread to the European Union. Lithuania reported cases of African swine fever in wild boar for the first time in January 2014. Poland followed in February 2014 and Latvia and Estonia in June and September of the same year. The disease continued to spread. By the end of 2019, it was present in nine EU Member States: Belgium, Bulgaria, Slovakia, Estonia, Hungary, Latvia, Lithuania, Poland and Romania.

In August 2020, EFSA began a major campaign to raise awareness and help halt the spread of African swine fever in south-east Europe. The campaign is aimed at countries identified by EFSA in 2019 as collectively comprising a “region of concern” because of their proximity to countries where ASF is present.

EFSA assessed the role of seropositive wild boar in African swine fever (ASF) persistence. Surveillance data from Estonia and Latvia investigated with a generalised equation method. This approach demonstrated a significantly slower decline in seroprevalence in adult animals compared with subadults. The seroprevalence in adults, taking more than 24 months to approach zero after the last detection of ASFV circulation, would be a poor indicator to demonstrate the absence of virus circulation. A narrative literature review updated the knowledge on the mortality rate, the duration of protective immunity and maternal antibodies and transmission parameters. In addition, parameters potentially leading to prolonged virus circulation (persistence) in wild boar populations were reviewed. A stochastic explicit model was used to evaluate the dynamics of virus prevalence, seroprevalence and the number of carcasses attributed to ASF.

Secondly, the impact of four scenarios on the duration of ASF virus (ASFV) persistence was evaluated with the model, namely a: (1) prolonged, lifelong infectious period, (2) reduction in the case‐fatality rate and prolonged transient infectiousness; (3) change in duration of protective immunity and (4) change in the duration of protection from maternal antibodies. Only the lifelong infectious period scenario had an important prolonging effect on the persistence of ASF.

Finally, the model tested the performance of different proposed surveillance strategies. Test to provide evidence of the absence of virus circulation (Exit Strategy). A two‐phase approach (Screening Phase, Confirmation Phase) was suggested for the Exit Strategy. The accuracy of the Exit Strategy increases with increasing numbers of carcasses collected and tested.

The inclusion of active surveillance based on hunting has limited impact on the performance of the Exit Strategy compared with lengthening of the monitoring period. This performance improvement should be reasonably balanced against an unnecessary prolonged ‘time free’ with only a marginal gain in performance. Recommendations are available for minimum monitoring periods leading to minimal failure rates of the Exit Strategy. The proposed Exit Strategy would fail with the presence of lifelong infectious wild boar. That said, it should be emphasised that the existence of such animals is speculative, based on current knowledge.