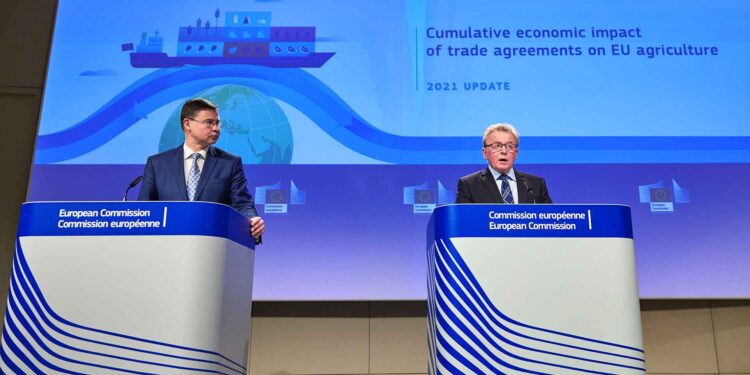 The EU trade agenda is set to have an overall positive impact on the EU economy and the agri-food sector, according to a new study published. Trade agreements are due to result in substantial increases in EU agri-food exports, with more limited increases in imports, creating a positive trade balance overall. The study also confirms that the EU’s approach to grant a limited amount of lower duty imports (through tariff rate quotas) is the best approach in terms of protecting specific vulnerable agri-food sectors in the EU.

The study carried out by the Commission’s Joint Research Centre (JRC) covers the cumulative effects of 12 trade agreements on the agri-food sector by 2030, an update of a 2016 study. A theoretical modelling exercise, the study includes trade results for the agricultural sector as a whole, and sector-specific impacts on trade, producer prices and production volumes.

Commenting on the study, Executive Vice-President responsible for trade Valdis Dombrovskis said: “The EU has always stood for open and fair trade which has enormously benefitted our economy, including agricultural producers. This study shows that we have been able to strike the right balance between offering more export opportunities to EU farmers, while protecting them from potential harmful effects of increased imports. Supporting the EU agri-food sector will continue to be a key element of the EU’s trade policy, be it through market opening, protecting traditional EU food products or defending it against dumping or other forms of unfair trade.”

Agriculture Commissioner Janusz Wojciechowski said: “The success of EU agricultural trade reflects the competitiveness of our sector. Reforms of the Common Agricultural Policy have highly contributed to this, supported by a global reputation of EU products as being safe, sustainably produced, nutritious and of high quality. This study, with more positive results than in 2016, confirms that our ambitious trade agenda helps EU farmers and food producers take full advantage of opportunities abroad while making sure we have sufficient safeguards in place for the most sensitive sectors.”

The study covers free trade agreements (FTAs) recently concluded or implemented by the EU, as well as trade agreements on the EU agenda. It includes two scenarios, an ambitious one (full tariff liberalisation of 98.5% of all products, and a partial tariff cut of 50% for the remaining products) and a more conservative one (full liberalisation of 97%, and 25% tariff cut for the others). In addition, included in the scenarios, the five concluded FTAs are modelled on the basis of the negotiated outcome. The results of the scenarios are both in comparison to a reference scenario of business as usual in 2030. Environmental and climate effects do not fall within the scope of the study, including any Green Deal related initiatives. The Sustainability Impact Assessments prepared in support of trade negotiations already provide the Commission with an in-depth analysis of the potential economic, social, human rights, and environmental impacts .

Main findings of the Study

Throughout the study, findings are for 2030, with the different scenarios in comparison to the reference scenario of business as usual.

The study confirms that the EU agricultural sector can benefit from the EU trade agenda. A comparison of the 2016 versus 2021 cumulative impact studies shows the effectiveness of tariff rate quotas in mitigating impacts on our sensitive sectors such as beef, rice or sugar. In fact, the 2016 study already updates the strategy towards Mercosur and this update can be the evidence base for the need for Tariff Rate Quotas in ongoing trade negotiations. Furthermore, an ambitious future Common Agriculture Policy, supporting innovation, sustainability and the competitiveness of the EU farming sector, can also contribute to minimise any negative outcomes of trade negotiations while reinforcing the positive ones.

The study analyses the economic effects on EU agriculture of 12 free trade agreements (FTAs), comparing on one hand the projection of the EU agri-food trade with the 12 FTAs implemented, and on the other hand the situation without them.

Two scenarios were analysed, a conservative, and an ambitious one. In both scenarios, the FTAs already concluded, such as with Japan or Mercosur, were modelled as per the negotiated outcome, including the Tariff Rate Quotas (TRQs). For the other agreements, a theoretical outcome was developed to avoid speculating on the possible detailed outcome of on-going and future trade negotiations.

Results of the EU trade agreements

The study indicates that the cumulated implementation of the 12 free trade agreements would result in a balanced increase in both the EU agri-food imports and exports, with a slightly higher increase in exports. This would increase further the net positive EU agri-food trade balance – already projected to remain largely positive in 2030 –by 800 million to 1 billion euros depending on the scenario considered. Impacts on production and producer prices would remain moderate.

More specifically, the EU agri-food exports would increase by 2.8% to 3.3% compared to the scenario without FTAs, an increase of 4.7 to 5.5 billion euros. As regards destinations, the biggest increase would be to exports to Japan (around 2 billion euros) followed by Mercosur.

Some sectors show considerable potential to benefit from the export opportunities offered by the 12 FTAs like dairy, pigmeat, processed food and beverages, notably wine. For cheese, one of our flagship agri-food products, total EU exports could increase by an additional 10%, with a positive effect on prices. The cumulated effect on the dairy sector could add additional 900 million euros to the market receipts of milk producers in 2030.

As regards imports, the study shows that the global EU agri-food imports would increase by 3.3% or 4.2% compared to the scenario without FTAs, an increase of 3.7 to 4.7 billion euros. As regards origins, the biggest increase would be to imports from Mercosur (around 2 billion euros) followed by Thailand.

Sectors like beef and poultry as well as sheep and rice will experience increased pressure from additional imports. This confirms the results of the 2016 study. The magnitude of the impact on those sectors is however significantly smaller this time. This is due notably to the modelling of the concrete outcome of concluded agreements, including TRQs. It is consistent with the expectation that providing greater market access in the form of tariff rate quotas – rather than mere tariff cuts – for the most sensitive products enables the EU to protect the related sectors. The only sensitive sector where projected impacts remain severe is rice.

As regards EU beef imports, that attracted a lot of attention in 2016, they will increase by a total of 85 000 to 100 000 tonnes by 2030 compared to the scenario without FTAs. This is significant, but remains limited notably because TRQs are implemented in the agreement with Mercosur. This explains that the impact on beef prices and beef production would remain limited. This is also the case for poultry or sheep.

Conclusions on the Agri-food sectors

All in all, the study shows an overall positive economic impact for the EU agriculture. Major additional benefits are also expected from the tackling of SPS barriers for EU exports and from enhanced protection of EU Geographical Indications, not considered in this exercise.

The study confirms that the EU agricultural sector can benefit from the EU trade agenda and seize opportunities in international markets, where the future growth lies.

It also calls for caution when making concessions in trade agreements in relation to certain sectors. The study shows that the existing approach taken by the Commission for the agricultural chapters in trade negotiations is appropriate, notably keeping a firm line to limit market access for sensitive products such as beef and rice. TRQs appear a suitable solution to prevent risks of severe negative impacts on some of the EU most fragile agricultural sectors.

Let me conclude that an ambitious future CAP, which supports innovation and the competitiveness of the EU farming sector, should contribute as well to further reinforcing the positive impacts while limiting the negative impacts that I have just mentioned.