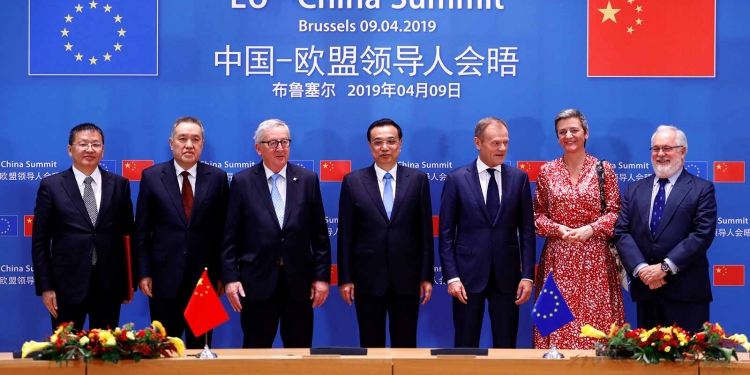 European Union and The People’s Republic of China committed to further strengthen the EU-China strategic partnership at the 21st EU-China summit. President Donald Tusk and President Jean-Claude Juncker represented the EU at the summit. Chinese Premier Li Keqiang represented China. Both sides agreed on a joint statement setting out the direction for EU-China relations in the years to come.

We managed to agree a joint statement, which sets the direction for our partnership based on reciprocity.
Donald Tusk – President of the European Council

The EU and China reaffirm the strength of their Comprehensive Strategic Partnership, their resolve to work together for peace, prosperity and sustainable development and their commitment to multilateralism, and respect for international law and for fundamental norms governing international relations, with the United Nations (UN) at its core. The two sides commit to uphold the UN Charter and international law, and all three pillars of the UN system, namely peace and security, development and human rights.

Leaders expressed their joint support for multilateralism and rules-based trade. They reaffirmed their joint engagement to reform the World Trade Organisation. The EU and China agreed to work together to address industrial subsidies. They also discussed foreign and security issues in their respective neighbourhoods.

The EU and China committed to build their economic relationship on openness, non-discrimination and fair competition. Both sides reiterated their willingness to provide each other with broader and more facilitated, non-discriminatory market access.

Leaders reaffirmed the importance of fighting climate change. Both sides agreed to intensify cooperation on the implementation of the Paris Agreement. The EU and China also agreed to cooperate on other environmental issues, such as biodiversity loss or maritime pollution.

EU and Chinese leaders expressed their strong commitment to the rules-based trading system with the World Trade Organisation (WTO) at its core. Both sides agreed to cooperate on the WTO reform and to help it meet new trade challenges. To this end, the EU and China will intensify the discussions to strengthen international rules on industrial subsidies.

Leaders also reaffirmed their support to the G20, the premier forum for economic cooperation. Both sides agreed that there should not be forced transfer of technology. On the issue of steel overcapacity, leaders agreed to maintain communication in the Global Forum on Steel Excess Capacity.

Besides, the EU and China will continue to forge synergies between China’s belt and road initiative and the EU’s initiatives with a view to improve Europe-Asia connectivity.