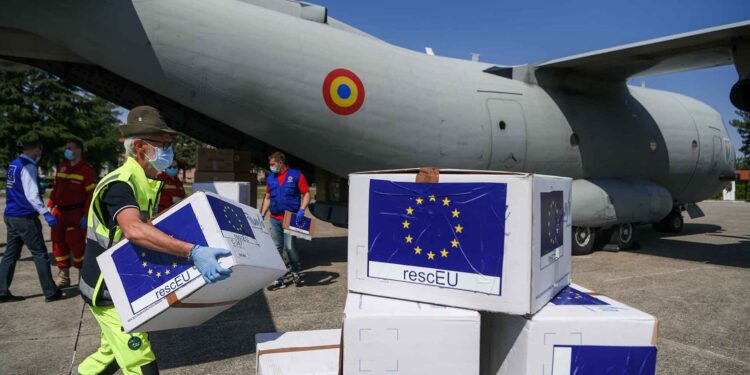 A Military airplane from Bucharest, Romania arrives in Milan, Italy bringing in DPI protections, part of Operation RescEU in the context of the COVID-19 pandemic

The European Union sends emergency support with RescEU mechanism to Slovakia and to Serbia, to fight Coronavirus pandemic. The EU is coordinating the deployment of a medical team to Slovakia to support intensive care treatment of COVID-19 patients, following a request via Slovakia via the EU Civil Protection Mechanism. Romania has already offered a team of 5 doctors and 9 nurses, specialised in intensive care.

Slovakia has recorded the highest coronavirus death rate in the world. Slovakia has seen a spike in new infections. The seven-day rolling average of daily deaths has raised at 1.782 per 100,000 citizens on 16th February. Slovak President Zuzana Caputova warned that the epidemiological situation in the country is extraordinarily grave and serious. Scientists found the British variant of coronavirus in 74% of almost 2,000 samples examined recently in the country. “It’s spread throughout Slovakia,” warned Prime Minister Igor Matovic.

The EU is also mobilising additional personal protective equipment. This includes 600,000 FFP2 protective masks and 650,000 pairs of gloves . The EU will provide the medical reserve to Serbia from rescEU base in Greece. The EU does not want to lose the Western Balkans. Russia and China are trying to win over Serbia.As pandemic spreads rival powers deploy soft power and aid to advance foreign policy goals. In Serbia the intersection of competing “coronavirus diplomacies” is highly visible.

“To avoid that worst-case scenario, we need your help and support. That is why I am asking that you send us anything you can. Money is not a problem, we need everything, from masks, gloves to ventilators, literally everything. Most of all we need your knowledge and people who would be willing to come here and help”. Vučić had said to Chinese Ambassador on 17 March 2020.

“All my personal hopes are focused on and directed toward China and its president,” Vučić had said due to ‘lack of EU solidarity’.

President Aleksandar Vučić had said: “European solidarity does not exist. That was a fairy tale on paper. I have sent a special letter to the only ones who can help, and that is China.”

Serbia – along with 5 other Western Balkans countries – was identified as a potential candidate for EU membership during the Thessaloniki European Council summit in 2003. In 2008, a European partnership for Serbia was adopted, setting out priorities for the country’s membership application, and in 2009 Serbia formally applied. Later in March 2012 Serbia was granted EU candidate status. In September 2013 a Stabilisation and Association Agreement between the EU and Serbia entered into force.

I would like to thank Romania for sending a medical team to support the treatment of COVID patients in Bratislava, putting EU solidarity into action. Equally, the protective masks and gloves sent to Serbia from the rescEU reserve will help to protect essential personnel fighting COVID-19 in the country.

EU Member States may also apply for funding to support the transfer of patients and the transport of medical personnel and teams through the Emergency Support Instrument. Since the beginning of the coronavirus pandemic, the Commission has helped 13 EU Member States and Participating States countries via the Civil Protection Mechanism and rescEU.