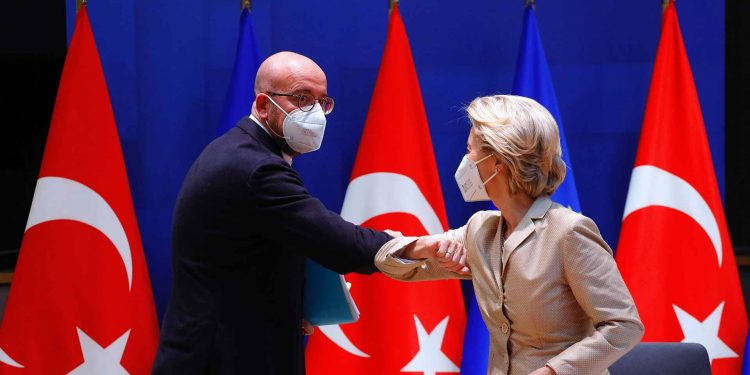 Erdogan slams Biden over ‘killer’ Putin comment and quits European Treaty on Violence Against Women. At the same time President von der Leyen discussed the possibility of her visiting Turkey as ties defrost. Is it really a defrost or just a deep frost?

On 9 March 2020, Presidents Charles Michel and Ursula von der Leyen met President Recep Tayyip Erdoğan in Brussels. The leaders discussed bilateral relations, the implementation of the EU-Turkey statement on migration, security and stability in the region and the crisis in Syria. On 18 June 2019 the General Affairs Council adopted conclusions on enlargement and stabilisation and association process, covering Turkey.

On 20 June 2019 the European Council endorsed the conclusions. The meeting followed the visit of President Michel to Ankara on 4 March 2020. Leaders discussed security issues in the region, especially in Syria. President Michel stressed that the EU would support any political solution which could bring about greater stability.

The last meeting of the Accession Conference with Turkey at ministerial level was held on 30 June 2016. The conference opened negotiations on Chapter 33, on financial and budgetary provisions.

Turkey and the EU need to work on the full implementation of the EU-Turkey statement on migration in order to de-escalate the situation.

Ahead of the March European Council, President von der Leyen and President Michel had a videoconference today Friday 19 March 2021 with President Recep Tayyip Erdoğan of the Republic of Turkey.

They discussed the follow up to the December European Council, the situation in the Eastern Mediterranean, including the forthcoming Cyprus settlement talks, and the state of play of EU-Turkey relations.

The EU side underlined the importance of sustained de-escalation and of further strengthening confidence building. Only this will allow for a more positive EU-Turkey agenda. The Presidents also exchanged views on the situation of Syrian refugees hosted in Turkey, as well as the wider regional situation including Libya and Syria. They also discussed a possible visit to Turkey following the March European Council.