Josep Borrell landed in Brussels Criticism over visit to Russia 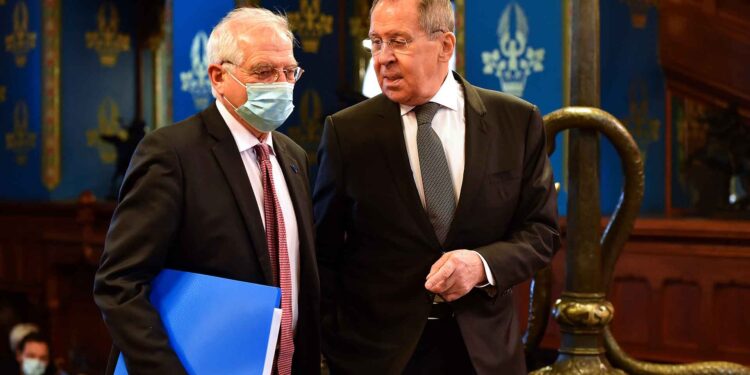 EU HRVP Josep Borrell concluded his three-day trip to Moscow and comes back into Brussels criticism over European position. The European External Action Service (EEAS) issued a press release that Borrell addressed a number of issues with Russian Foreign Minister Sergei Lavrov. The statement was mentioning the “deteriorating human rights situation in Russia and the deliberate attempts to silence critical voices, NGOs, and civil society.”

Russia expelled three diplomats from Germany, Poland and Sweden for protesting in support of jailed Alexei Navalny. Moscow announced the expulsions just after Josep Borrell landed in Russia to meet Foreign Minister Sergei Lavrov. In Brussels there are many voices accusing him of falling into Russian propaganda trap. Now he landed back in Brussels criticism and defended his controversial mission – trip to Russia.

The EU High Representative for Foreign Affairs and Security Policy/Vice-President of the European Commission, Josep Borrell, visited Moscow from 4-6 February. During the visit, High Representative Borrell had a wide-ranging discussion on EU-Russia relations and the global geopolitical landscape with his counterpart, Foreign Minister Sergei Lavrov. He also met with representatives of Russian civil society organisations, including representatives of non-governmental organisations that face severe restrictions on their work as a result of Russian legislation, members of the European business community, as well as Russian academics and think-tank representatives  on the internal, foreign and economic policies of Russia.

During the bilateral consultations with Foreign Minister Lavrov, a broad spectrum of foreign policy issues was addressed including Russia’s actions in Ukraine, the need to respect the democratic choice of the people of Belarus, and other conflicts in the neighbourhood. The High Representative stressed that, in line with the Helsinki Final Act, stability in Europe must be based on cooperation, respect for the territorial integrity and sovereignty of nations, respect for human rights and fundamental freedoms. They also discussed cooperation within the Joint Comprehensive Plan of Action (JCPoA) – the Iran nuclear deal, and the Middle East Peace Process, among other issues.

High Representative Borrell and Minister Lavrov also discussed possible engagement in key areas, such as cross-border cooperation, research and innovation, as well as ways to jointly address global challenges, such as climate change and public health.

The High Representative expressed clearly the European Union’s deep concern for the deteriorating human rights situation in Russia and the deliberate attempts to silence critical voices, NGOs and civil society. He reiterated the European Union’s strong condemnation of the recent sentencing of Alexei Navalny, which followed his illegal detention and assassination attempt by a chemical nerve agent on Russian soil. Josep Borrell reiterated that the European Union expects Mr Navalny’s immediate and unconditional release, along with those arbitrarily detained in recent demonstrations. He stated that EU Foreign Ministers would discuss the implications of Mr Navalny’s sentencing and further EU action, having already imposed sanctions over the prohibited use of a chemical weapon, at this month’s Foreign Affairs Council. During Mr Borrell’s visit, EU diplomats maintained contact with Mr Navalny’s lawyers.

High Representative Borrell strongly condemned the decision of the Russian authorities to expel three European diplomats and rejected the allegations that they conducted activities incompatible with their status as foreign diplomats. He called on the Russian authorities to reconsider this decision, stressing European Union’s unity and solidarity with the Member States concerned.

Before his departure from Moscow, High Representative Borrell paid tribute to Boris Nemtsov, a leading opposition figure who was murdered six years ago in the heart of Moscow, at the site of his assassination.

Summarising his visit, Josep Borrell said: “Diplomatic channels need to remain open, not only to de-escalate crises or incidents, but to hold direct exchanges, deliver firm and frank messages, all the more so when relations are far from satisfactory. I will debrief my EU colleagues on the outcome of my visit at the Foreign Affairs Council on 22 February, where we will have a dedicated discussion on EU-Russia relations, ahead of the strategic debate on EU-Russia relations at the March European Council”.

EU foreign policy chief Josep Borrell has completed his three-day trip to Moscow. He returns now in Brussels criticism to debate the EU-Russia relationship difficult moments. Many European voices claim that Borrell did not defend Europe when Russian foreign minister Sergei Lavrov criticised the European Union. Mr Lavrov said that EU leaders are “deluded” and “culturally arrogant” in accusing Russia of trying to support Alexei Navalny. Also Josep Borrell did not mention to Lavrov that there is a debate on sanctions due to the imprisonment of Mr Navalny.

“Borrell has to think about resigning,” tweeted MEP Rasa Juknevičienė.

Borrell has to think about resigning. EU foreign policy has to return to reality.

The former Czech’s EU Commissioner, Mr. Pavel Telicka tweeted that it is not just Josep Borrell that failed in Moscow, not having met at least the wife of Navalny and having witnessed EU diplomats banished. It is also the EU which still believes that it can avoid further sanctions. This was a wake up call.

Also Belgian MEP Guy Verhofstadt told that Josep Borrell should simply not have gone to Moscow without a message of EU strength & a mandate for sanctions to back it up.