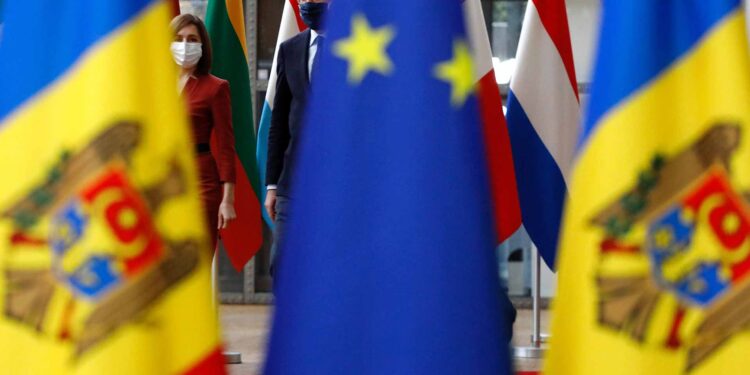 The European Union congratulated Maia Sandu on her election as sixth president of the Republic of Moldova and as the first female president in the country’s history. Having a pro-European Head of State in our neighbourhood is a very positive message for the whole European Union. It is an incentive for closer cooperation with the authorities and civil society of Moldova in accelerating progress and implementation of the roadmap for EU integration.

EU welcomes Ms Sandu as a clear call by Moldovans to continue the fight against corruption and to restore the rule of law in their country. Not only are these Maia Sandu’s highest priorities; they are also at the top of the EU’s agenda in relation with Moldova.

During the inauguration on December 24, Maia Sandu emphasized that she wants to become the president of European integration. Citizens in Moldova want to live in a liberal state where nobody is persecuted because of their political beliefs. A state where nobody loses their job because they refuse to betray their values and campaign for a politician they do not support.

Josep Borrell reaffirmed the commitment of the EU to strengthen political association and economic integration with the Republic of Moldova by working in close partnership, on the basis of the ambitious Association Agreement. He welcomed the President’s strong focus on and mandate for reforms, strengthening the rule of law and tackling corruption, and assured her of the EU’s full support in this endeavour, which is key to bringing tangible benefits to the lives of Moldovan people. They also discussed internal developments and the need for decisive and effective steps to regain the trust of Moldovan citizens in state institutions, to build a strong and independent judiciary and ensure a stable financial and banking sector.

Regarding the challenges resulting from the coronavirus pandemic, the High Representative/Vice-President recalled the EU’s strong solidarity with the Republic of Moldova. In addition to €108 million mobilised to deliver protective equipment, strengthen the healthcare system and support socio-economic recovery, the Republic of Moldova has already also benefitted from €50 million of emergency Macro-Financial Assistance from the EU.

High Representative/Vice-President Borrell underlined the EU’s commitment to help ensuring that coronavirus vaccines are accessible to all, including in the EU’s immediate neighbourhood. Furthermore, additional EU assistance, in particular through the World Health Organisation, can be used by the Moldovan authorities to be adequately prepared for the coronavirus vaccination campaign.

High Representative/Vice-President Borrell and President Sandu also discussed the situation in the Transnistrian region. The High Representative reiterated the EU’s commitment to a peaceful, comprehensive and sustainable settlement process within the framework of the 5+2 process and reaffirmed its steadfast support to the sovereignty and territorial integrity of the Republic of Moldova within internationally recognised borders, in line with the OSCE Ministerial Statement from December 2020.

President Maia Sandu has met His Majesty King Philippe of Belgium at the end of the official visit to Brussels, the presidential press service has reported. President Maia Sandu thanked the King for the fact that Belgium had been a constant supporter of the processes of domestic transformation in Moldova.

European Economic and Social Committee (EESC), a body representing organised European civil society praises the fact that despite the pandemic, the high turnout gives a strong mandate to Ms Sandu and emphasises the wish of the people of Moldova for a better future in a fairer society. Moldovans have chosen to pursue the European and democratic path and Europe will continue to stand by Moldova in its efforts towards modernisation, democratisation and rapprochement with the EU.

Members of the EESC wish Ms Sandu and her administration every success in implementing her ambitious reform agenda. European Institutions are looking forward to further cooperation, through European mechanisms on monitoring the EU-Moldova Association Agreement and on empowering civil society in decision- and policy-making.