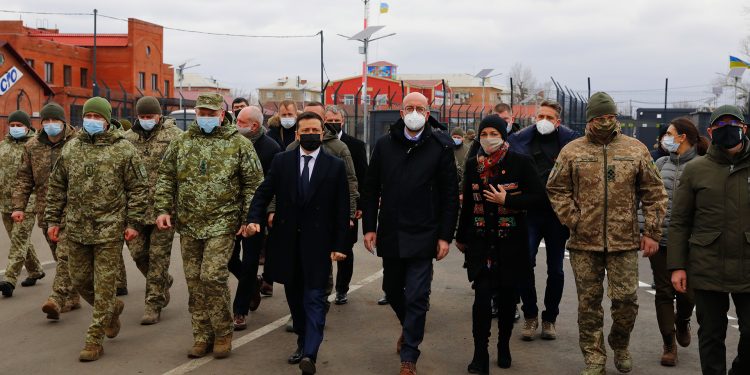 The President of the European Council conveyed the EU’s unwavering support to Ukraine’s independence, sovereignty and territorial integrity in its internationally recognised borders. The EU is united in its solidarity with Ukraine.

President Michel reiterated his call on Russia to uphold the OSCE principles and commitments on transparency of military movements.

He also recalled the EU’s full support to efforts in the Normandy Format and the Trilateral Contact Group and called for the full implementation of the Minsk Agreements as the way forward towards a lasting settlement. The ministers of Foreign Affairs of the EU will exchange views on Ukraine on Monday. The ministers will also hold an informal exchange with the Minister for Foreign Affairs of Ukraine, Dmytro Kuleba.

President Michel reiterated his thanks for President Zelenskyy ‘s invitation to the Crimea Platform Summit planned on 23 August, which he accepted during his visit to Ukraine on 2 March. President Michel looks forward to attending.

The 22nd summit between the European Union and Ukraine was the first bilateral summit held physically in Brussels since the outbreak of the COVID-19 pandemic. The EU and Ukraine leaders reaffirmed their continued commitment to strengthening the political association and economic integration of Ukraine with the European Union.

The association agreement is the main tool for bringing Ukraine and the EU closer together. It promotes:

The deep and comprehensive free trade area (DCFTA) is the economic part of the agreement. It offers a framework for modernising Ukraine’s economy and trade relations.

The association agreement entered into force on 1 September 2017.

We, the G7 foreign ministers of Canada, France, Germany, Italy, Japan, the United Kingdom and the United States of America and the High Representative of the European Union are deeply concerned by the large ongoing build-up of Russian military forces on Ukraine’s borders and in illegally-annexed Crimea.

These large-scale troop movements, without prior notification, represent threatening and destabilising activities. We call on Russia to cease its provocations and to immediately de-escalate tensions in line with its international obligations. In particular, we call on Russia to uphold the OSCE principles and commitments that it has signed up to on transparency of military movements and to respond to the procedure established under Chapter III of the Vienna Document.

Recalling our last statement of 18 March, we reaffirm our unwavering support for the independence, sovereignty and territorial integrity of Ukraine within its internationally recognised borders. G7 Foreign Ministers support Ukraine’s posture of restraint.

We underline our strong appreciation and continued support for France’s and Germany’s efforts through the Normandy Process to secure the full implementation of the Minsk agreements, which is the only way forward for a lasting political solution to the conflict. G7 Foreign Ministers call on all sides to engage constructively in the Trilateral Contact Group on the OSCE’s proposals to confirm and consolidate the ceasefire.