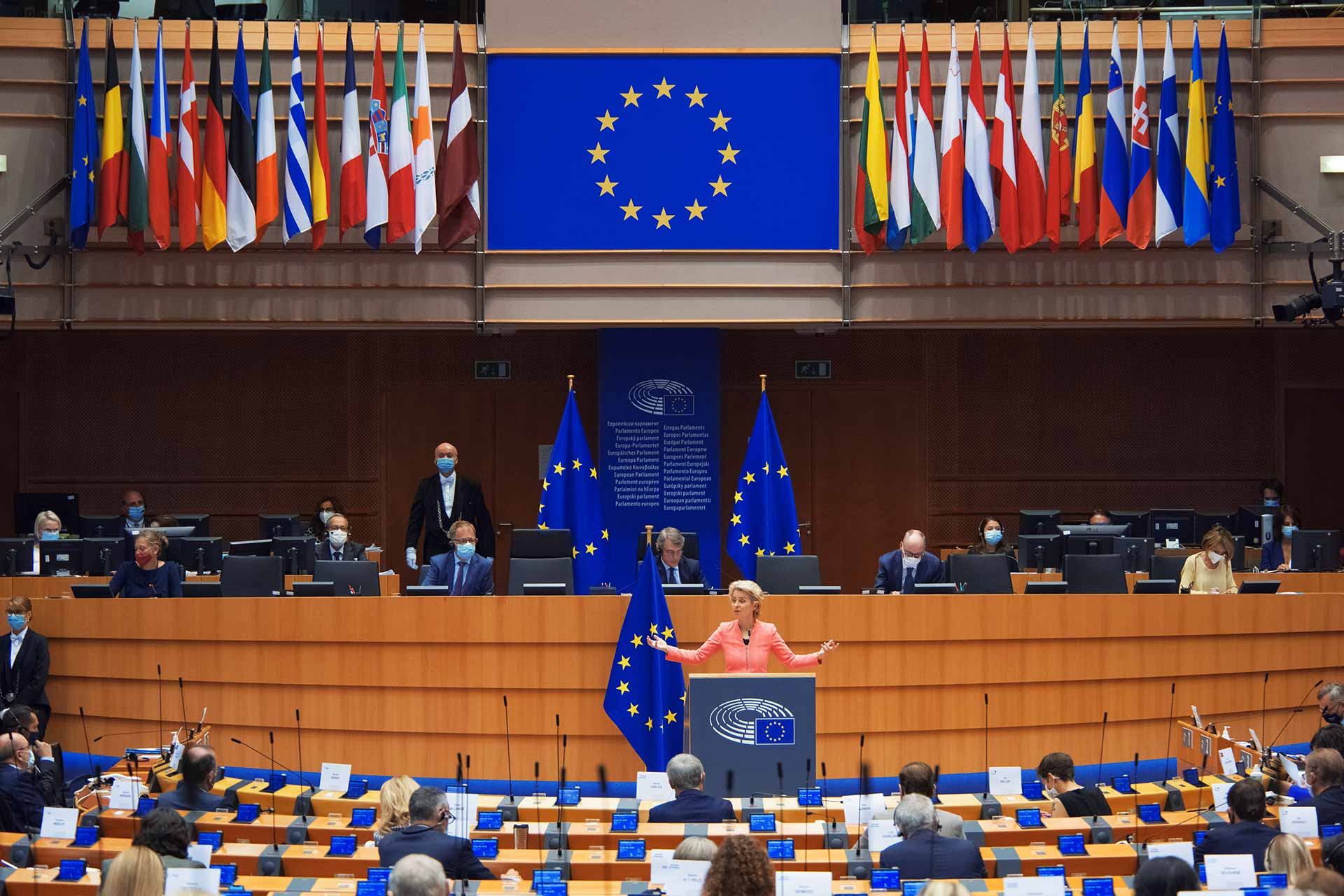 Global Europe is the EU vision on how to make the Union a truly global player. Ursula von der Leyen wants to lead a Geopolitical Commission. In a world marked by the strategic rivalry between the US and China, the questioning of multilateralism plus health and environmental crises Europe has a special role. EU Chief wants a Global EUrope where trust will be the foundation of any strong partnership. EC President has a plan to boost the EU’s role on the world stage. Europe must deepen and refine its partnerships with its friends and allies.

Nevertheless, von der Leyen will face significant obstacles in achieving her ambition of a “Geopolitical” Commission. Von der Leyen debated European priorities for the year ahead and highlighted her vision for how the European Union could evolve in the future. From this perspective, Ursula von der Leyen advocates a Europe emerging stronger from the Coronavirus pandemic and paving the way for a new vitality. NextGenerationEU, the new instrument for recovery, is a unique opportunity of changing in this direction. In her speech, Ursula von der Leyen presented the actions of the European Commission in order to give Europe the means to become Green, Digital and more resilient.

On this occasion, Ursula von der Leyen EUdebated with Members of the European Parliament. Global Europe of SOTEU positiones Europe as Global Leader. In a changing world gajor powers are either pulling out of institutions or taking them hostage for their own interests.

The world has become more multipolar but multilateralism has weakened, as evidenced by the growing paralysis of the United Nations Security Council, the deep crisis of the World Trade Organization, or more recently that of the World Health Organization. And this precisely at a time when global problems, especially the climate crisis or health issues, are becoming more and more critical.

Amid this increasing competition, not only do the classic tools of power play a role, but soft power itself is increasingly used as a weapon: think of films and other cultural products, the capacity to build social networks or the ability to attract talent. Trade, technology, data, information are now instruments of political competition.

We are firm believers in the strength and value of cooperating in international bodies. It is with a strong United Nations that we can find long-term solutions for crises like Libya or Syria.

It is with a strong World Health Organisation that we can better prepare and respond to global pandemics or local outbreaks – be it Corona or Ebola.

And it is with a strong World Trade Organisation that we can ensure fair competition for all.

But the truth is also that the need to revitalise and reform the multilateral system has never been so urgent. Our global system has grown into a creeping paralysis. Major powers are either pulling out of institutions or taking them hostage for their own interests.

Neither road will lead us anywhere. Yes, we want change. But change by design – not by destruction.

And this is why I want the EU to lead reforms of the WTO and WHO so they are fit for today’s world.

But we know that multilateral reforms take time and in the meantime the world will not stop.

Without any doubt, there is a clear need for Europe to take clear positions and quick actions on global affairs.

From the outset I have said China is a negotiating partner, an economic competitor and a systemic rival.

We have interests in common on issues such as climate change – and China has shown it is willing to engage through a high-level dialogue. But we expect China to live up to its commitments in the Paris Agreement and lead by example.

There is still hard work to do on fair market access for European companies, reciprocity and overcapacity. We continue to have an unbalanced trade and investment partnership.

And there is no doubt that we promote very different systems of governance and society. We believe in the universal value of democracy and the rights of the individual.

Europe is not without issues – think for example of anti-semitism. But we discuss them publicly. Criticism and opposition are not only accepted but are legally protected.

So we must always call out human rights abuses whenever and wherever they occur – be it on Hong Kong or with the Uyghurs.

But what holds us back? Why are even simple statements on EU values delayed, watered down or held hostage for other motives?

When Member States say Europe is too slow, I say to them be courageous and finally move to qualified majority voting – at least on human rights and sanctions implementation.

This House has called many times for a European Magnitsky Act – and I can announce that we will now come forward with a proposal.

We need to complete our toolbox.

Be it in Hong Kong, Moscow or Minsk: Europe must take a clear and swift position.

I want to say it loud and clear: the European Union is on the side of the people of Belarus.

We have all been moved by the immense courage of those peacefully gathering in Independence Square or taking part in the fearless women’s march.

The elections that brought them into the street were neither free nor fair. And the brutal response by the government ever since has been shameful.

The people of Belarus must be free to decide their own future for themselves. They are not pieces on someone else’s chess board.

To those that advocate closer ties with Russia, I say that the poisoning of Alexei Navalny with an advanced chemical agent is not a one off. We have seen the pattern in Georgia and Ukraine, Syria and Salisbury – and in election meddling around the world. This pattern is not changing – and no pipeline will change that.

Turkey is and will always be an important neighbour. But while we are close together on the map, the distance between us appears to be growing. Yes, Turkey is in a troubled neighbourhood. And yes, it is hosting millions of refugees, for which we support them with considerable funding. But none of this is justification for attempts to intimidate its neighbours.

Geopolitics in the Eastern Mediterranean

Our Member States, Cyprus and Greece, can always count on Europe’s full solidarity on protecting their legitimate sovereignty rights.

De-escalation in the Eastern Mediterranean is in our mutual interest. The return of exploratory vessels to Turkish ports in the past few days is a positive step in this direction. This is necessary to create the much needed space for dialogue. Refraining from unilateral actions and resuming talks in genuine good faith is the only path forward.  The only path to stability and lasting solutions.

As well as responding more assertively to global events, Europe must deepen and refine its partnerships with its friends and allies.

And this starts with revitalising our most enduring of partnerships.

We might not always agree with recent decisions by the White House. But we will always cherish the transatlantic alliance – based on shared values and history, and an unbreakable bond between our people.

So whatever may happen later this year, we are ready to build a new transatlantic agenda. To strengthen our bilateral partnership – be it on trade, tech or taxation.

And we are ready to work together on reforming the international system we built together, jointly with like-minded partners. For our own interests and the interest of the common good.

The scenes in this very room when we held hands and said goodbye with Auld Lang Syne spoke a thousand words. They showed an affection for the British people that will never fade.

But with every day that passes the chances of a timely agreement do start to fade.

Negotiations are always difficult. We are used to that.

And the Commission has the best and most experienced negotiator, Michel Barnier, to navigate us through.

But talks have not progressed as we would have wished. And that leaves us very little time.

As ever, this House will be the first to know and will have the last say. And I can assure you we will continue to update you throughout, just as we did with the Withdrawal Agreement.

That agreement took three years to negotiate and we worked relentlessly on it. Line by line, word by word.

And together we succeeded. The result guarantees our citizens’ rights, financial interests, the integrity of the Single Market – and crucially the Good Friday Agreement.

The EU and the UK jointly agreed it was the best and only way for ensuring peace on the island of Ireland.

And we will never backtrack on that. This agreement has been ratified by this House and the House of Commons.

It cannot be unilaterally changed, disregarded or dis-applied. This a matter of law, trust and good faith.

And that is not just me saying it – I remind you of the words of Margaret Thatcher:

“Britain does not break Treaties. It would be bad for Britain, bad for relations with the rest of the world, and bad for any future Treaty on trade”.

This was true then, and it is true today.

Trust is the foundation of any strong partnership.

And Europe will always be ready to build strong partnerships with our closest neighbours.

That starts with the Western Balkans.

The decision six months ago to open accession negotiations with Albania and North Macedonia was truly historic.

The Western Balkans are part of Europe – and not just a stopover on the Silk Road.

We will soon present an economic recovery package for the Western Balkans focusing on a number of regional investment initiatives.

And we will also be there for the Eastern Partnership countries and our partners in the southern neighbourhood– to help create jobs and kickstart their economies.

Three months later, I returned with my entire College to set our priorities for our new strategy with Africa. It is a partnership of equals, where both sides share opportunities and responsibilities.

Africa will be a key partner in building the world we want to live in – whether on climate, digital or trade.