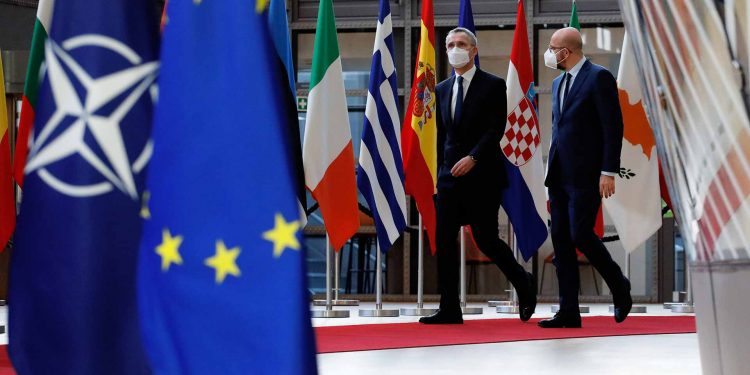 On 26 February EU leaders discussed with NATO “strategic autonomy”, security, defence, and relations with the Southern Neighbourhood. European Council members had an exchange of views on EU-NATO relations with NATO Secretary-General Jens Stoltenberg.

Security and defence issues were at the heart of discussions among EU leaders on the second day of their video conference. They exchanged views with NATO Secretary General Jens Stoltenberg and committed to increasing the EU’s capacity to act autonomously. The first day of the meeting was centred around COVID-19 response coordination and health issues.

EU leaders then held a strategic debate on European security and defence policy. They reaffirmed their commitment to increase the EU’s capacity to act autonomously, as well as the need for the EU to take more responsibility for its security.

We want to act more strategically, to defend our interests and to promote our values.

For a strong and ambitious transatlantic agenda

Leaders expressed their commitment to cooperating closely with NATO and strengthening partnerships with the UN and key regional partners. They emphasised that they looked forward to cooperating with the new US administration on a strong and ambitious transatlantic agenda that included a close dialogue on security and defence.

European Council members noted the significant steps taken to enhance the EU’s security and defence policies, tools and instruments. They referred to the goals of further deepening security and defence cooperation amongst member states, increasing defence investment, and enhancing civilian and military capabilities and operational readiness.

To that end, leaders committed to:

Leaders invited the Commission to present, by October 2021, a technology roadmap for boosting research, technology development and innovation and reducing their strategic dependencies in critical technologies and strategic value chains. They also invited the Commission and the High Representative, Josep Borrell, to report on the implementation of the Cybersecurity Strategy by June 2021.

Strategic Compass on security and defence

High Representative Borrell updated EU leaders on work towards a Strategic Compass. This will guide future European action on security and defence. Leaders called on the High Representative to take forward work on this initiative together with member states, with a view to its adoption by March 2022. Leaders discussed the political and strategic partnership with the Southern Neighbourhood and reaffirmed the European Council conclusions of December 2020.