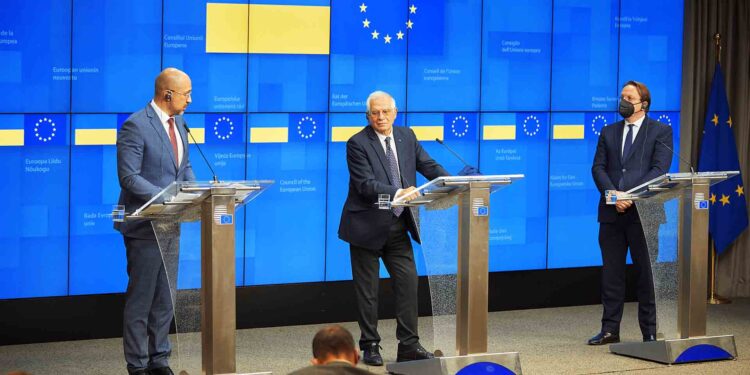 The 7th session of the European Union-Ukraine Association Council focused on several areas of interest: political reforms, rule of law and security, economic cooperation and trade. Josep Borrell chaired the council in Brussels with Prime Minister of Ukraine Denys Shmyhal.

“Our special interest lies within updating of the annexes to the Association Agreement, especially in terms of trade, digitalization of the economy, the green course, the conclusion of industrial visa-free regime, integration into the EU energy market and cooperation in the field of transport. We count on the EU’s commitment to achieving the goals of the Agreement, the most ambitious of which is the gradual integration of Ukraine into EU markets,” said Denys Shmyhal following the meeting.

Representatives of the European Union, for their part, reaffirmed their readiness to help Ukraine gain early access to vaccines and support the immunization campaign.

Denys Shmyhal noted, the European Union had reaffirmed its unwavering support and commitment to Ukraine’s independence, sovereignty and territorial integrity, and condemned the actions of the Russian Federation to violate Ukraine’s territorial integrity. The European Union’s policy of non-recognition of the annexation of Crimea remains in place as well. During the meeting, the representatives of the EU and Ukraine agreed to start consultations on further review of the liberalization of trade in goods. The parties welcomed the launch of the preliminary assessment mission on Ukraine’s readiness for the Agreement on Conformity Assessment and Acceptance of Industrial Products (Industrial visa-free regime) and hope to receive its recommendations as soon as possible.

Apart from that, the parties stressed the importance of further work on the integration of Ukraine’s energy system into the European one, as well as the significance for Ukraine to prolong the reform in the energy sector. The members of the Ukrainian delegation highlighted that Ukraine would continue to implement legislative initiatives related to the European Green Deal. Moreover, joint projects in the areas of energy efficiency, coal transformation and the fight against climate change will be continued.

The Prime Minister of Ukraine, in turn, noted that cooperation between Ukraine and the EU would prolong in the directions of research, educational projects, migration policy, cybersecurity, digitalization and other areas. “Effective implementation of the Association Agreement will remain a key priority of the reform efforts of the Ukrainian Government and my personal priority as Prime Minister,” summed up Denys Shmyhal.

The Association Council reaffirmed its continued commitment to strengthening the political association and economic integration of Ukraine with the European Union on the basis of the Association Agreement and its Deep and Comprehensive Free Trade Area (DCFTA) and to the common values enshrined in it.

The Association Council underlined the unity, solidarity and mutual commitment demonstrated in the face of the COVID-19 pandemic. The EU reiterated its readiness to help Ukraine gain early access to vaccines and support its vaccination campaign through a regional project with the World Health Organisation launched today. The Association Council looked forward to the resumption of non-essential travel for our citizens, once the epidemiological conditions allow.

The EU welcomed the reform efforts by Ukraine. The participants agreed on the need for Ukraine to step up efforts on strengthening the rule of law and to ensure the independent and effective operation of the anti-corruption institutions in order to secure broad public trust and support in the fight against corruption. They have reconfirmed that a comprehensive judicial reform remains vital. Following the decisions by the Constitutional Court of Ukraine, the EU commended the commitment of Ukraine to fully restore the electronic asset declaration system and emphasized the importance of adopting deterrent sanctions. The EU also highlighted the need for credible integrity checks for judges.

The EU reiterated its unwavering support and commitment to Ukraine’s independence, sovereignty and territorial integrity within its internationally recognised borders. The Association Council reiterated its strong condemnation of the violation of Ukrainian sovereignty and territorial integrity by the Russian armed forces and reconfirmed its support for a peaceful and sustainable political solution. The need for full implementation of the Minsk agreements by all sides was underlined and Russia’s responsibility in this regard was stressed. The EU recalled that the scope and duration of economic sanctions against Russia remains linked to the full implementation of the Minsk agreements. The importance of maintaining the ceasefire regime, and compliance with additional measures to strengthen the ceasefire in effect since July 27, 2020 was underlined. The Association Council called for the release all conflict-related detainees in line with the Minsk Agreements. The Association Council also reiterated its full support to the efforts in the Normandy format, the Trilateral Contact Group and the OSCE and called for the OSCE Special Monitoring Mission’s full, secure and unimpeded access throughout Ukraine.

The EU reaffirmed its policy of non-recognition of the illegal annexation of the Autonomous Republic of Crimea and the City of Sevastopol by Russia, including through restrictive measures. The Association Council condemned the deterioration of the human rights situation in the Crimean peninsula and the further militarisation of the peninsula and the Black and Azov Seas. The sides called for the immediate release of all illegally detained and imprisoned Ukrainian citizens in the Crimean Peninsula and in Russia, including Crimean Tatar activists. The Association Council also called on Russia to ensure unhindered and free passage to and from the Sea of Azov, in accordance with international law. The sides welcomed the diplomatic efforts aimed at restoring Ukraine’s sovereignty and territorial integrity within its internationally recognized borders. In this context, Ukraine further presented the concept of an “International Crimean Platform” and invited the EU to take part in the inauguration high-level meeting of this initiative on August 23, 2021, in Kyiv.