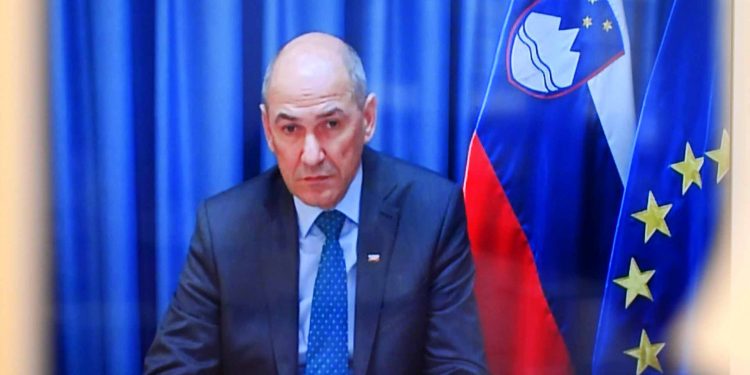 Parliament’s monitoring group has invited the Slovenian Prime Minister Janez Janša to investigate Media freedom in Slovenia. The online EU debate joined the culture minister, chief prosecutor and ombudsman, as well as media and civil society. Following a first meeting held on 5 March, the Democracy, Rule of law and Fundamental rights Monitoring Group (DRFMG) debates the state of media freedom in Slovenia. The dedicated working group set up by the Civil Liberties Committee has been monitoring closely the situation related to EU values across all member states, especially in the context of COVID-19 emergency measures.

Slovenian journalists face widespread online harassment and threats, not least from the country’s Prime Minister Janez Janša, while reports that public and private media are subject to political interference keep emerging. In their open letter of October 2020, 22 Slovenian editors warned that they “are subjected to direct lying, insinuations, manipulation and insults from those in power, starting with the top of the government”. Slovenia will take over the Council of the EU’s rotating presidency in July 2021.

Freedom of expression and information, as well as the freedom of the press, which provides the most powerful platform for the first two, contribute significantly to the formation of public opinion, thus allowing people to make informed choices in their political decisions.

The European Parliament has repeatedly advocated press freedom and media pluralism in the EU and abroad. It has recently addressed the issue of the effectiveness of press freedom as an EU fundamental right and an objective EU value, in view of the scarce possibility for the EU institutions to act to enforce respect for EU fundamental rights and values by Member States.

Personally, I have been trying since 1987 to get the European Parliament to talk about the rule of law, media freedom and democracy in Slovenia. In the beginning this was impossible because Slovenia was part of Yugoslavia. But I can say that this is when we would have need your help. However, I think that this debate is needed now as well. We have needed it all through the so-called Slovenian transition. It is not a secret that we have problems with the rule of law in Slovenia as well as media freedom. Of course, we have different points of view when it comes to these issues snd the only objective measure is facts.

The European Parliament has jurisdiction here and it’s appropriate that you deal with this. Like I said, we have nothing to hide. We just want things to be judged objectively and we want to make sure that each institution plays its part.

I’ve been told that the Prime minister has disconnected. So I take it that the session was not to his liking. I’m sorry he feels that way, but I hope that in our next meeting we are going to discuss this. But I do not think it’s appropriate to send a video at the moment that the meeting starts, you know, without stating any reasons why we have never done something like this before.

I personally don’t come here to watch videos. I come here to engage orally with the people and the guests and these are our guests. Even if they are prime ministers, the prime minister was invited here to present his case. We can make his case without him. This is a presidency, next presidency of the European Union, and I think it’s a shame for the next president of the European Union to behave in a way which precludes us from discussing issues of rule of law, the underlying issue and the main issue of the of these years.

Elena Yoncheva (S&D, be), The prime minister of Slovenia is attacking the media freedom, even going on war with the media. And I will tell by experience where this path is leading to the bottom of every anti corruption in media freedom ranking and regularly attacking journalist and tweeting. I can see that those attacks even more open and aggressive than it comes to female journalist. We need answers from the prime minister of Slovenia. What is the aim of those tweets and what is the role of investigative journalists in in Slovenia? We are waiting for those answers. Thank you.

We have travelled to Malta and Slovakia and met with the Prime ministers who in both cases had to step down afterwards, and they met with us and we had an exchange of views, and we may not have agreed and there may have been a lot going on, which is still going on. But we sat down and talked because this is Europe. Europe is not the adversary of the prime minister of Slovenia, the government of Slovenia as part of Europe.

Peter Svetina, Human Rights Ombudsman of the Republic of Slovenia

I can say that in the ombudsman’s office we treated more than 4800 cases. This was a 30% increase of cases in comparison to the year previous. When it comes to the European Court of Human Rights, I would like to highlight that this Court during the years 1993 and 2019 has filed or processed ,000 or even more cases, 3.48% have been successful.