EU debates rule of law, balance between rights and values 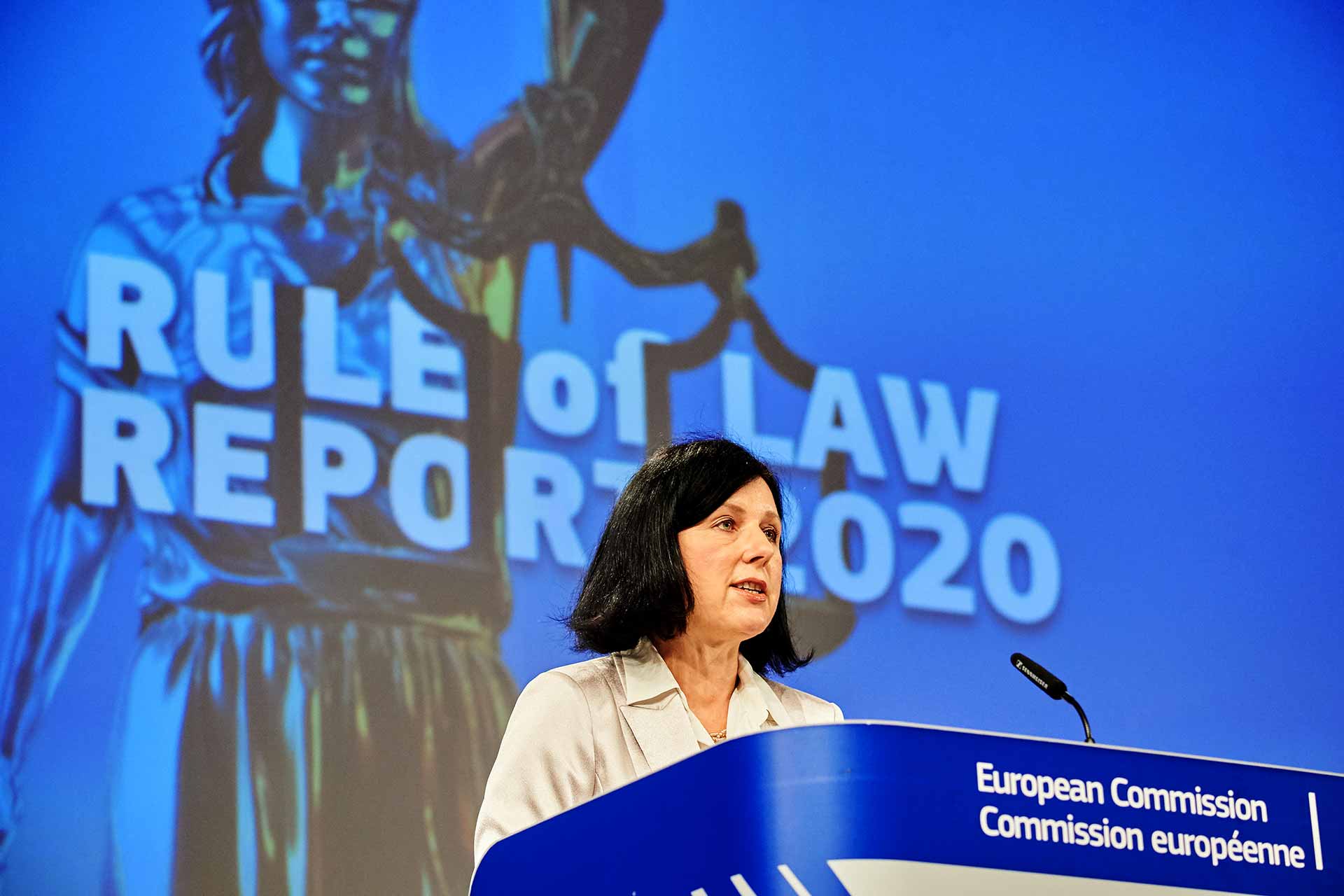 Rule of law guarantees fundamental rights and values, allows the application of EU law, and supports an investment-friendly business environment. It is one of the fundamental values upon which the EU is based on. It sets in balance rights and obligations of eu membership. This is crucial for rebuilding trust between Member States. EU rule of law forms the principles of EU responsibility and values.

In recent years, the European Commission has been confronted with crisis events in some EU countries, which revealed systemic threats. The Commission reacted by adopting the rule of law framework to address such threats in EU countries.

Upholding the rule of law

Respect is essential for the very functioning of the EU: for the effective application of EU law, for the proper functioning of the internal market, for maintaining an investment-friendly environment and for mutual trust. The core of the rule of law is effective judicial protection, which requires the independence, quality and efficiency of national justice systems. National justice systems play a key role in upholding the rule of law, restoring confidence and the return to growth.

The framework establishes a three-stage process. They are:

If no solution is found within the rule of law framework, Article 7 of the TEU is the last resort to resolve a crisis and to ensure the EU country complies with EU values. Article 7 TEU provides for special mechanisms with far-reaching sanctions in case an EU country does not respect the fundamental values referred to in Article 2 TEU, including the rule of law.

The objective of the rule of law framework is to prevent emerging threats to the rule of law to escalate to the point where the Commission has to trigger the mechanisms of Article 7 of the Treaty on European Union (TEU). This is done through dialogue with the EU country concerned.

The Eurobarometer also underlined that Europeans consider it important that the rule of law applies throughout the EU, with 89% supporting the need for the rule of law to be respected in all other EU Member States. It has further revealed that over half of Europeans do not feel sufficiently informed about the EU’s fundamental values.

Strengthening the rule of law

The European rule of law mechanism is a preventive tool, aiming to promote the rule of law and prevent challenges from emerging or deteriorating. The European Rule of Law Mechanism provides a process for an annual dialogue between the Commission, the Council and the European Parliament together with Member States as well as national parliaments, civil society and other stakeholders on the rule of law. The Rule of Law Report is the foundation of this new process.

A core objective of the European Rule of Law Mechanism is to stimulate inter-institutional cooperation and encourage all EU institutions to contribute in accordance with their respective institutional roles. This aim reflects a long-standing interest from both the European Parliament and the Council. The Commission also invites national parliaments and national authorities to discuss the report, and encourages other stakeholders at the national and EU level to be involved.

The Rule of Law Report and the preparatory work with Member States takes place annually as part of the Mechanism, and will serve as a basis for discussions in the EU as well as to prevent problems from emerging or deepening further. Identifying challenges as soon as possible and with mutual support from the Commission, other Member States, and stakeholders including the Council of Europe and the Venice Commission, could help Member States find solutions to safeguard and protect the rule of law.

The EU has existing tools at its disposal to protect the rule of law. On 30 September 2020, the European Commission published the first annual rule of law report that monitors both positive and negative developments relating to the rule of law in all member states. It has been monitoring Romania and Bulgaria since they joined the EU in 2007.

There is also dialogue on the rule of law in the Council and the current German presidency plans to have country-specific discussions in November starting with five EU countries.

If the Commission is of the view that a member state is violating EU law, it can start infringement proceedings that may lead to financial sanctions determined by the European Court of Justice. Another procedure, under Article 7 of the Treaty on European Union, allows the Council to make recommendations or decide by unanimity on sanctions against a member state, including the suspension of membership rights.

Cypriot politicians promised to support the sale of a Cypriot passport to a Chinese businessman. The Golden Passports EU citizenship-through-investment scheme has been in operation in its current form since 2013. This VISA law gave the option to foreign individuals to invest €2.5m in Cyprus and gain as “gift” the EU citizenship.

Rule of law deficiencies in member states mean. EU funds may be used to undermine European values and make friends. MEPs are demanding new tools to tackle the problem. MEPs warned that European values are in danger. EU funds from the long-term budget and the recovery plan should not be into the hands of those working against democracy and fundamental rights in Europe.

In a report adopted on 7 October, MEPs called for reinforcement of the rule of law across Europe. They asked for a new mechanism; as well as effective sanctions on EU countries found to be in violation. They also called on the EU institutions to agree on clear rules linking receipt of EU funds by a member state to respect for the rule of law.

MEPs argue that existing tools are insufficient. While there are ongoing hearings in the Council under Article 7 regarding Poland and Hungary, Parliament has expressed its regret about the lack of significant progress by the two member states in addressing the issues.

Rule of law in Poland and Hungary has worsened

The EU’s discussions with Poland and Hungary have not yet led these countries to realign with the EU’s founding values.

“The failure by the Council to make effective use of Article 7 continues to undermine the integrity of common European values, mutual trust and the credibility of the European Union as a whole”, claims the EP.

“In July, the heads of state and government agreed on a mechanism to protect the budget of the EU and not on another rule of law mechanism,” Varga wrote.

Those who violate the Treaties cannot pose as the defenders of rule of law and European values.

Hungarian Prime Minister, Viktor Orbán last month called on European Commission President Ursula von der Leyen to dismiss Vera Jourova, the top rule of law official in the vdLeyen Commission. The cause of his ire was an interview Jourova gave to German magazine Der Spiegel, in which she called Hungary an “ill democracy” – a pun on Orban’s famous term “illiberal democracy” he once used to describe his country. Orban claimed the statements were not only a direct attack against the democratically elected government, but “also a humiliation of the Hungarian people”.

Corruption or dependent courts may mean there is no protection against misuse of EU money allocated to a member state. The Commission put forward a legislative proposal in 2018 that aims to defend the Union’s financial interests, should deficiencies in the rule of law be detected.

The proposal envisages that the Commission may suspend or reduce payments from the EU budget to a member state in breach of the rule of law. The Council would be able to veto the Commission’s ruling by a qualified majority.

Rule of Law report on Bulgaria

Members of the European Parliament have just voted on a report on the rule of law, democracy and fundamental rights in Bulgaria, following widespread protests over a series of corruption scandals tied to the country’s political elite.

Ska Keller MEP, President of the Greens/EFA group and shadow rapporteur on the rule of law in Bulgaria, comments:

“The Parliament is sending a strong signal that we cannot turn a blind eye towards EU countries that have a rule of law and fundamental rights problem. We must call them out when they are failing on upholding our common European values that each country signed up to when they join the EU. The people of Bulgaria deserve to live in a European country free from corruption and where their rights are guaranteed by the rule of law.

“We stand with the protesters on the streets of Bulgaria. The Bulgarian government should improve the rule of law record and put much greater efforts into the fight against corruption more intensively. Given the current crisis in Bulgaria, it would be premature to end the Commission’s monitoring and reporting of the country through the Cooperation and Verification Mechanism.”

EU mechanism on democracy, rule of law and fundamental rights

Finally, the resolution underlines the “imminent need” for an EU mechanism on democracy, the rule of law and fundamental rights, as proposed by the Parliament. This should be an annual independent review which assesses, on an equal footing, the compliance of all member states with the values stipulated in Article 2 of the Treaty.

According to Article 7 of the Treaty, following these requests, the Council may determine that there is a clear risk of a serious breach of EU values in the concerned countries.